The Fair Labor Association released its report on Apple’s Foxconn factory audit today, finding serious worker-rights violation and getting an agreement from both companies to take immediate action.

“The findings of FLA’s nearly month-long investigation revealed serious and pressing noncompliances with FLA’s Workplace Code of Conduct, as well as Chinese labor law,” said the FLA in its report. You can read the full report below.

According to the FLA, its staff spent over 3,000 hours inside three Foxconn factories — in Guanlan, Longhua, and Chengdu — observing labor conditions, as well as chewing through policies and records. FLA anonymously surveyed over 35,000 Foxconn employees about their working conditions, including overtime hours, pay, health and safety, and the overall environment of the Foxconn factories.

Based on all this data, the FLA found that in all three factories, employees spent more hours working at peak production time than is legal in China, or under the FLA Code. Some workers were not given their 24-hours of downtime, and had to work up to seven days in a row. 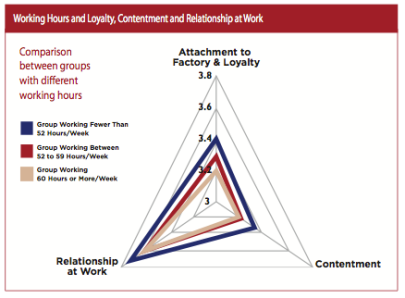 The survey revealed that employees are particularly worried about becoming sick from aluminum dust. The FLA believes Foxconn has already put procedures into place, however, to protect workers from the dust, which previously caused an explosion at the Chengdu factory. Workers tend to feel like they don’t have access to the safety committees who make decisions on heath and safety procedures at Foxconn. Committees are intended to be a representation of the broader Foxconn community.

“It should be noted that committees may not be truly representative of the workers, because management nominates candidates for election,” said the FLA in the report.

Workers are, however, paid over the legal minimum in China, though overtime is an issue. The FLA believes 14 percent of overtime workers are not being paid fully for their hours. This is because Foxconn only plays employees based on 30-minute increments. The association makes the point that if a worker spends 58 minutes on the assembly line, he or she would only be paid for a half-hour of work.

After looking at all of these issues, the FLA has asked Foxconn and Apple to take several steps to improve working conditions. Both companies have agreed to the steps, which include opening up avenues between workers and the health and safety committees, and changing the way accidents are reported. Foxconn promises to have all of its employees working the legal amount of hours or less by July 1, 2013, without disrupting wage laws.

Apple made the decision to join the FLA soon after reports about poor working conditions in its Foxconn factory emerged. The move was intended to curb criticism and add a more transparency to Apple’s supplier network, which has traditionally been veiled. Tales of long hours, very low wages, and child and slave labor have been among some of the complaints against Apple, which chief executive Tim Cook says he greatly wants to reduce.

“If we find a supplier that intentionally hires under-aged labor, it’s a firing offense,” he said at the Goldman Sachs technology conference in February. “We don’t let anyone cut corners on safety.”

The company promised to publish audits performed by the Fair Labor Association to its website, but some people are still not convinced. SumOfUs, an activist group that has been following Apple’s Foxconn debacle from the beginning, believes joining the FLA is really just a public relations move. Members of the FLA are, in fact, paying members, and thus the objectivity of the FLA’s reports is questionable. SumOfUS doesn’t believe the FLA reports are whitewashed, however, saying:

“A critical report from the FLA will not, in and of itself, constitute proof that a new day is dawning in Apple’s supply chain. It will only be proof that the FLA and Apple are smart enough to understand that no one, at this point, is going to be fooled by a whitewash.”

We have reached out to the FLA and Apple and will update this post upon hearing back.