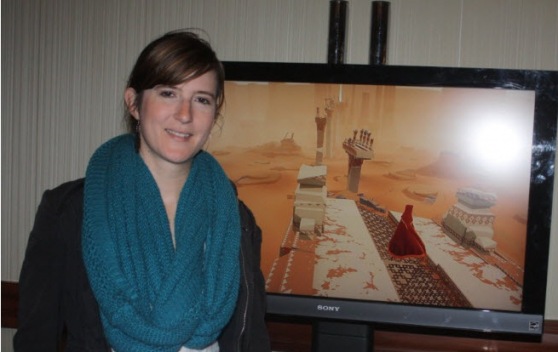 Kellee Santiago, co-founder of Journey developer Thatgamecompany, has decided to leave the Santa Monica, Calif.-based game studio that she started with Jenova Chen, according to Gamasutra.

The split is described as an amicable one, and Santiago said it was time for her to move on. That brings to an end one of the most creative and successful collaborations on the artistic side of video games. Journey, the team’s latest effort, went on sale as a downloadable title on the PlayStation Network March 13. The title has already gotten accolades from game critics, including a high rating of 90/100 from GamesBeat. In the non-violent game, the player goes on a solitary journey across the desert to a distant mountain. The visual effects of the wind and sand are beautiful, and the story is told without any words. Journey has been the fastest-selling game in the history of the PSN.

“After doing these three games, I think it was a really great opportunity for all of us to look at what we’ve learned and what I’ve taken from that experience, and go forth and take it into new arenas,” Santiago said.

Gamasutra said other members of the small team may leave as well. Chen has been the creative visionary at the company, and Santiago has helped execute those visions as president. Santiago became famous for a TEDx talk on how video games can be considered art, putting her at odds with move critic Roger Ebert, who didn’t play games but said they can “never be art.” We caught up with Santaigo recently at the Game Developers Conference, where she noted that the experience of making Journey was a tough one.

“So much of my work at Thatgamecompany was really supporting Jenova’s visions for the types of games he wanted to make, and I felt like I have done everything I needed to do there, and that he’s in a great place now to go on and continue with some of the other people at Thatgamecompany, to take that to a whole new height,” Santiago told Gamasutra.

[Update: Robin Hunicke, game designer and another key member of the Journey team, also announced she was leaving to join San Francisco-based Tiny Speck, which makes the online game Glitch].

Gamasutra says a new project has begun at Thatgamecompany. Previous hits include Flow and Flower.