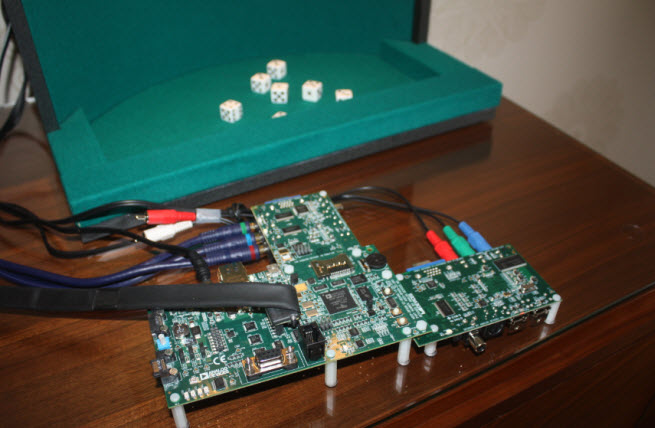 Humans have always been better at seeing than machines. But the age of “embedded vision” is upon us, and machines that see are getting better and better. A case in point is a demonstration project from chip-maker Analog Devices, which showed a vision system can count the numbers for a dice roll faster than any person can. 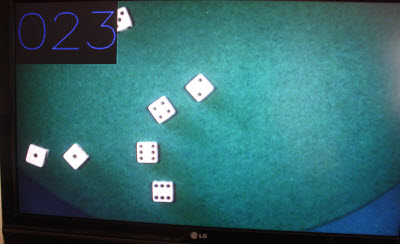 The picture above shows seven dice and a system with a new dual-core Analog Devices Blackfin chip with vision acceleration. As soon as I rolled the dice, a video camera captured the image of the dots on each die. Blackfin then processed the data and displayed the count on a TV set (pictured right). Each time, it captured the count within a split second, while it took me many seconds to count. It’s not clear what this can be used for, but it’s certainly a cool demo.

Denis Labrecque, DSPs marketing programs manager at Norwood, Mass.-based Analog Devices, said in an interview with VentureBeat that the newest digital-signal processing chips like Blackfin are bringing the cost of computer vision down dramatically.

The new version of the Blackfin processors (with two 500-megahertz cores)  also use very little power, as low as 400 milliwatts. The chip can do something like 25 billion math operations per second. The Analog Devices demo was part of a display at the engineer-focused Embedded Vision Alliance event in San Jose, Calif. today. Embedded vision applications are becoming widespread because of dropping costs and are being used in markets such as surveillance, industrial control, video games, said Brian Dipert, editor in chief of the alliance.