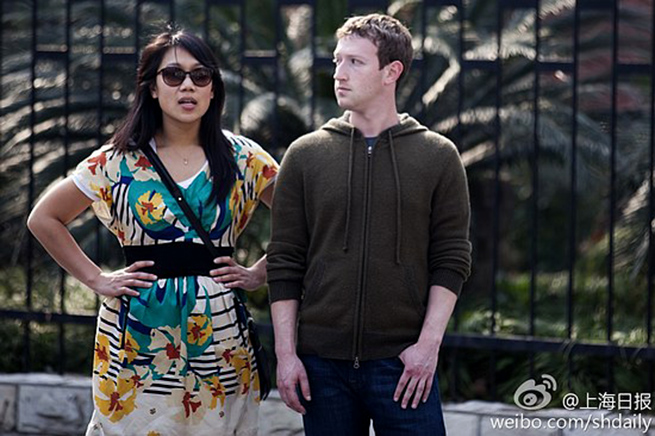 Tim Cook wasn’t the only American tech CEO running around China this week. Mark Zuckerberg was also making the rounds in the world’s most populous country, reportedly on a vacation with his girlfriend, but potentially doing some work as well.

China is the largest country that Facebook is not currently playing in, and with Facebook’s impending IPO, people have wondered if Facebook will finally launch there. Mainland China has 460 million Internet users, so there’s a huge opportunity for growth. An estimated 450,000 people in China already access Facebook and other banned sites using proxies and VPN software, according to SocialBakers.

“We continue to evaluate entering China,” Facebook told the New York Times. “However, this market has substantial legal and regulatory complexities that have prevented our entry into China to date.”

Zuckerberg said he was simply on vacation with his girlfriend Priscilla Chan (see photo above), who is Chinese-American. However, Zuckberg labeled a trip in 2010 to China as vacation as well and he still found time to meet with major Chinese Internet companies Alibaba, Sina, and Baidu.

On his way back from China, Zuckerberg met briefly with Japanese Prime Minister Yoshihiko Noda. Japan is the only country outside of the U.S. where Facebook has an engineering office. Prime Minister Noda thanked Zuckerberg for Facebook helping victims communicate with family after last year’s massive earthquake and tsunami. In February, Facebook also launched a “Disaster Message Board” in Japan to help with future emergencies.

“With more than 10 million people on Facebook in Japan, a robust developer community, and a sophisticated mobile market, Japan is an important country for Facebook,” Facebook spokeswoman Debbie Frost told Reuters.