It’s not all cyber crime and shadowy government dealings over there in China. Apparently, Chinese supercompany Alibaba is testing out social shopping via a Pinterest clone.

Sounds yummy, especially for the ladies. If there’s one thing we know about the ladies, it’s that the only things they love more than shopping and being social are Pinterest and low-fat yogurt.

But we digress. Alibaba’s search engine eTao (a collaboration with Microsoft launched about a year and a half ago) has just rolled out Faxian or Fa Xian, which roughly translates as “discover” (and is also the name of a traveling Chinese Buddhist monk, for you trivia lovers).

Faxian was launched as a beta product after about three months of research and is currently getting around 60,000 uniques per day. Its aim is simple: Let users share their interests, then guide users toward becoming purchasing customers via eTao’s search features. The image-heavy layout and pinning/re-pinning features are a direct nod to (or smash-and-grab from) Pinterest, and the site is targeted at the young female demographic — you know, the same demo that Pinterest seems to have nailed, no pun intended.

Check out this pinboard called “The Temptation of Nude,” which anyone, Chinese or otherwise, who loves stilettos will immediately understand: 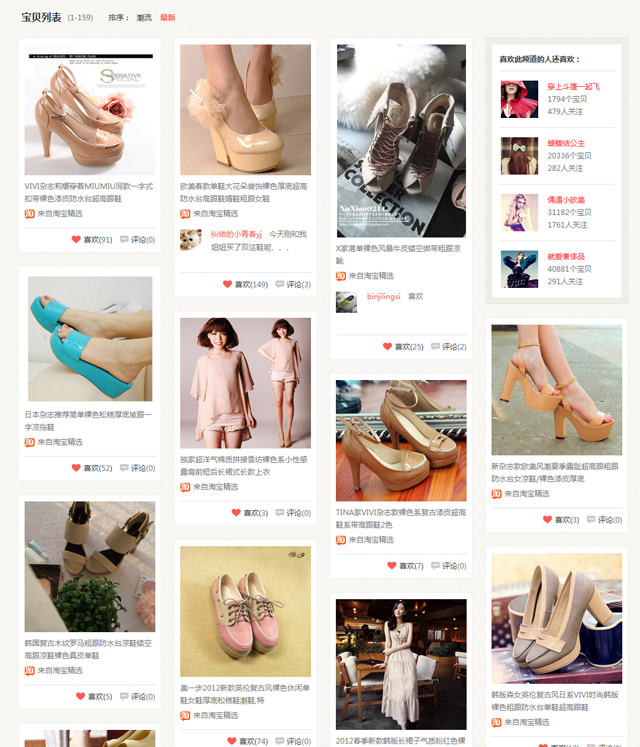 eTao itself is a subsidiary of Taobao, an Alibaba Group company that controls around 75 percent of Chinese online retail commerce.

“We have about 10 partners right now,” eTao director Chen Lijuan told Reuters. “At the end of the year, I hope to see if we can achieve 100 partners, because this year China’s social shopping industry is very hot.”

You know what else is hot? Pinterest cloning. We’ve got an exhaustive list of all the niche-oriented Pinterest clones worth checking out, and we’ll be posting it this weekend, so stay tuned.