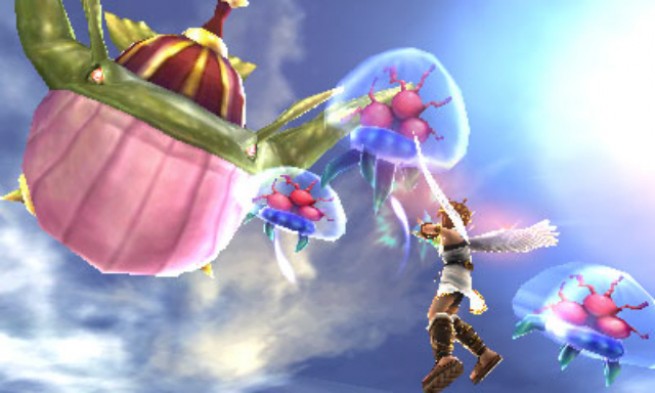 Control issues
There’s no way around it: Uprising was designed for a controller with two thumbsticks and then painfully forced upon the poor little Nintendo 3DS. To the game’s credit, a variety of control options are available, but not a single one ever felt perfect to me (especially as a left-hander), and the idea of using the default stylus aiming was outright absurd.

Accessories are sold separately that may help, but you shouldn’t have to pay for something extra to do what the developers couldn’t do themselves. Every copy of Uprising also includes a stand that can make playing a little more comfortable, assuming you have an elevated flat surface to stick it on, otherwise it’s pretty much useless.

I thought these control issues would be a total game-killer, but after a couple of minutes I had adapted to the learning curve and accepted that everything I did would just be a notable percentage less accurate or responsive than it really should have been. Of course, as you increase the Intensity, everything becomes that much more frustrating. The game’s best rewards are not hidden behind actual difficulty so much as they are a prize for struggling with the flawed controls.

The game’s best rewards are not hidden behind actual difficulty so much as they are a prize for struggling with the flawed controls.

Pointless extras
Uprising has a handful of extra features that may seem like added value at first, but ultimately they’re wasted potential. The Idol Toss allows you to “launch eggs to unlock Idols,” but the Idols are pointless. Instead of unlocking new content by discovering it in single-player as is commonplace in other games, you have to discover them through the Idol Toss, where you place an egg(s) into a bowl and launch it up in the air for a random result. Idols themselves are just gallery content, such as weapons, items, or monsters you can look at in the Vault. Eggs replenish over time (real-world hours), but can also be purchased with Play Coins. I’d personally prefer to have my Play Coins unlock actual usable items and weapons like they do in every other game, rather than something I can look at but not touch.

Likewise, the AR Card Battle are a desperate attempt to make the 3DS’ augmented reality functions seem useful. Then there’s the Offering, where you can offer up your precious hearts to Palutena. This mode even tells you outright that there’s no reward for doing so, but it will “bring the goddess closer in spirit,” meaning her 3D model gets closer to the screen. Amazing!

The second half
Once you’ve completed chapter nine, you’re given a faux end credit scene which is then interrupted by the game’s “real” villain. Everything good I said about Uprising on the first page? Throw it out starting from this point in the game. Imagine you’ve just ran a marathon, and after crossing the finish line, a clown jumps out from behind a bush, punches you in the kidneys, and says, “Just kidding, you still have 16 more miles to run!” It’s not a good way to break the news to the player.. 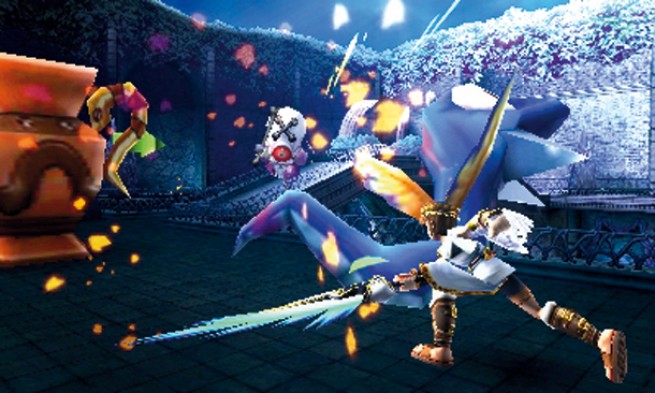 Had Uprising’s story ended at chapter nine, or perhaps had a smoother segue into the second act, my assessment would have been vastly higher. Not only did every mission after that fake-out ending seem like a total chore, but the dialogue and characters that had cohesively held the entire experience together rapidly deteriorated into a non-stop headache. Soon there was an entire crowd of voices incessantly yapping away, including the least intimidating villain since Skyward Sword’s Ghirahim, and I no longer cared about any of it. I just wanted the game to stop, but it didn’t. This relentless nightmare persisted for another 16 dreadfully long levels, and my enjoyment of the game incrementally dropped with each and every one of them..

CONCLUSION
I found myself mostly thrilled with Kid Icarus: Uprising right up until the very end of the ninth chapter. It’s almost impressive how quickly this game goes from being a great, well-rounded experience to a total narrative disaster that drags on for far too long. The multiplayer doesn’t have quite enough meat to warrant a full-price purchase on its own, and with little motivation to see the (second) story arc through to completion, the game’s overall value drops off sharply after the first couple of hours.

Kid Icarus: Uprising was released on March 23, 2012 for the Nintendo 3DS. A copy of the game was provided by the publisher for the purpose of this review.