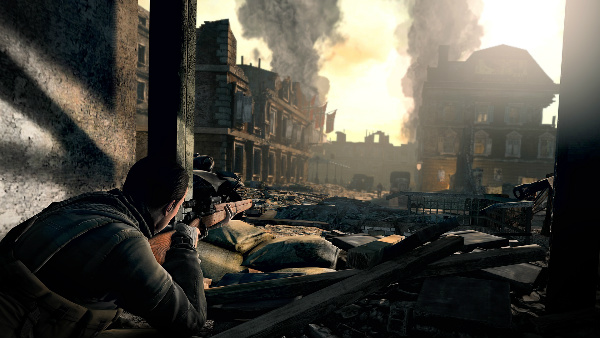 Crouched low, Office of Strategic Services agent Karl Fairburne shifts his rifle's weight on his back. It’s an Eastern Front treasure — a Mosin-Nagant M91. A practical tool for practical uses, but Fairburne's mind focuses squarely on the mission. As the Red Army's thrust into the heart of Nazi Germany seals the fate of the Third Reich, Hitler's intellectual cadre — scientists, engineers, researchers — claw for escape. The OSS thinks otherwise. Fairburne's quarry: members of the notorious V2 rocket program.

Peering over the pockmarked wall of a husked building, Fairburne appraises the ruined boulevard stretching away into the distance. A glint catches his eye. Slowly, he unstraps his binoculars. Through the magnified view, he discerns the unmistakable coal-scuttle shape of a German helmet. Its owner, in a fit of ironic repose, leans against an overturned table outside a shattered cafe. Fairburne mentally files away the soldier's position for later.

It's time to move. Fairburne creeps along the sunlit street, an unholstered Welrod pistol filling his hands. The Brits certainly took no pains for the visual appeal of their weapons, but the Welrod's built-in silencer compensates its ugliness. With a sound no louder than the snapping of one's fingers, the Welrod can stealthily snuff out a life. 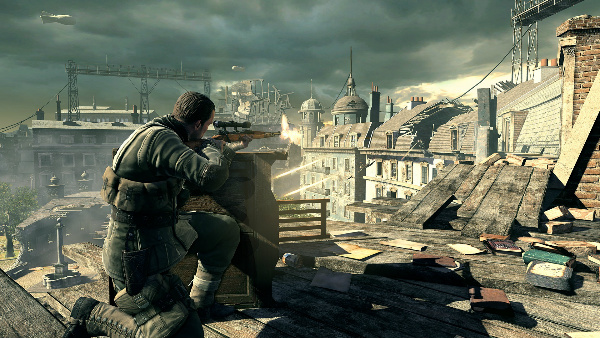 The shifting gravel beneath Fairburne's boots quails against the staccato drumbeat of intensifying artillery fire. Turning into an abandoned residence, Fairburne pauses for a little homeowner's insurance. He wedges a German hand grenade against some rocks and deftly stretches a thin wire across the blown-out entrance, hooking the end into a jutting piece of wood. Fairburne's hands keep steady as he curls the string around the grenade's pull cord. The war's god of fortune is improvisation.

Ascending to the abode's second floor, Fairburne spots his nest — a window partially concealed by rubble. It overlooks the boulevard; a laughably obvious perch for an urban sharpshooter, but Fairburne's time is up. His ears prick at a noise riding just below the artillery's din: truck engines. Fairburne unslings his rifle.

As if on cue, an Opel Blitz swings into view. It coasts to a stop next to another parked truck. Its idling motor thrums in sync with Fairburne’s heartbeat. He inches his rifle's scope up to his eye. Down below, a figure jumps off the truck's rear and walks up to the driver's side, engaging in the faint murmurings of unintelligible conversation.

Fairburne tracks his scope to the parked truck nearby. Concentrating, he sets his crosshairs slightly above the truck's fuel tank situated on its lower right side. After calculating for bullet drop and windage, he confidently squeezes the trigger. The rifle's report cracks the air above the boulevard a split second before the truck explodes spectacularly in a shower of blazing gasoline. 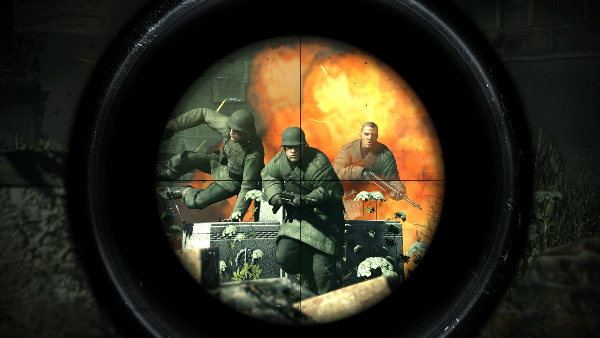 Germanic expletives. Frantic shouting. The burning truck quickly becomes an inferno and spreads fiery tendrils to its brother. The truck's cargo quickly disgorges itself, filling the street with panicked German troops. The passenger door flies open. A man — a little too pompously dressed to be a conscript — stumbles away from the wreckage in a daze. He hunkers behind a signpost, shielding himself against the flaring heat. A few soldiers form a loose blob of protection around him. Fairburne calmly swivels the crosshairs onto the man’s face.

Call it zen. An adrenaline rush. The combat high. Fairburne doesn’t need labels. For a single, crystalline moment, the universe is an indrawn breath, the rushing of blood in his ears, lungs full of oxygen, the rifle's wooden caress against his hands…and the set of fear-stricken eyeballs in his sights.

Fairburne exhales. He pulls the trigger.

The bullet lances the man's cheek, tearing muscle and shattering bone. The man's head snaps back as the bullet's impact wreaks havoc on his jaw with a sickeningly wet crunch. The deadly piece of metal lazily descends into the man's gullet and violently rearranges his esophagus before punching out a walnut-sized hole. The now-flattened bullet, trailing a faint streamer of blood like some sort of grotesque comet, tumbles in the air erratically and lodges itself with a soft thud in the chest of the soldier behind the man. Both men crumple instantly. 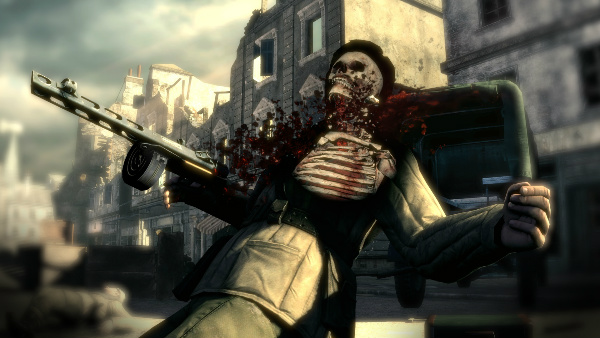 Fairburne springs into action. His movements are instinctual, mechanical. His scope skitters across the boulevard, pausing only to add another voice to the rising cacophony of the mortally wounded. The life-to-death cycle between trigger and bolt doesn't faze Fairburne. He doesn't flinch when a fleeing soldier careens into the house's entrance and reaps the booby trap's molten flak bounty. Indifference, like improvisation, comes naturally for those entwined with the war's desolation. He doesn't stop until the street is quiet again.

His objective completed, Fairburne steals out of the house and moves down an adjacent alleyway for extraction. The OSS will soon reach out to him again with another target — another face under the crosshairs.

Berlin crumbles. But for Karl Fairburne, the experience is altogether human.