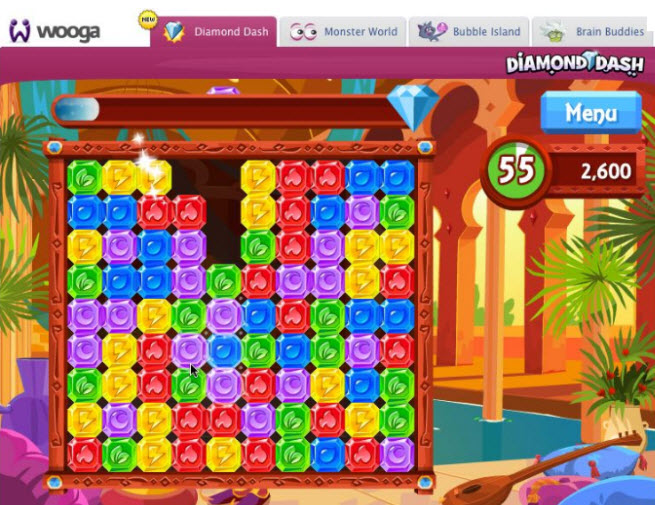 Wooga has come out of nowhere to become the second-largest player on Facebook in social games. Now it is showing great progress in getting downloads on iOS too, with more than 11 million downloads of Diamond Dash in four months.

The Berlin, Germany-based social and mobile game studio has become Europe’s largest social game publisher, with more than 46 million monthly active users on Facebook. Diamond Dash debuted in December on iOS (iPhone, iPad, and iPod Touch) and took off thanks to social features such as synchronized scores between mobile and Flash versions, a real-time leaderboard, and the ability to gift friends playing on a desktop computer from a mobile device.

The percentage of users choosing to connect to Facebook via mobile has continued to rise since the game launched, from 28 percent of users in December 2011 to 64 percent of users at the end of March. Users who log in from Facebook are eight times more likely to spend money and spend 50 percent more on average. Users were directed to the Diamond Dash app from Facebook more than 18.5 million times. More than 100,000 players are using the new iPad with the better retina display. The iPhone accounts for 51 percent of downloads, 13 percent for the new iPad, 25 percent for the iPhone 4, and 22 percent for the iPhone 4S. 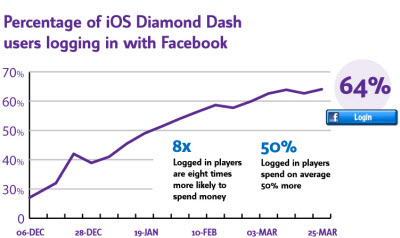 The company was founded in 2009 by Jens Begemann (who we interviewed at the Game Developers Conference), Philipp Moeser, and Patrick Paulisch with the goal of making games for everyone, including the mass market and not just gaming die hards. Since then, it has only published six of them: Bubble Island, Brain Buddies, Monster World, Happy Hospital, Magic Land, and Diamond Dash. With that portfolio, the developer grew its monthly active users by 185 percent in 2011.

Wooga has raised $24 million in venture capital and has grown to more than 150 employees.  The company now faces a number of strategic decisions, such as doubling down on Facebook or spreading out to platforms such as Google+ or Zynga.com.