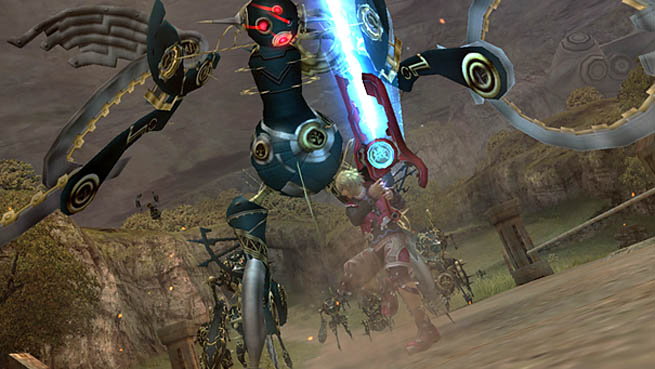 Distracting character design
So the world, the inanimate parts of the adventure, those are inventive and beautiful. All that’s just the backdrop, though. The focus is on the characters in the foreground, and those have some problems.

Xeno, The Saga
Back the ’90s, Tetsuya Takahashi headed up a team at Square to make Xenogears, a science fiction RPG with an ambitiously-conceived game world and expensive anime cutscenes. It came to America in 1998, where it instantly found a cult following among the branch of western geekdom that considers Japanese cartoons about robots and teen angst the peak of man’s artistic achievements.

Cooler heads pointed out some problems, things like repetitive combat, abuse of religious symbolism, and the fact that development seemed to have run out of steam halfway through. Xenogears’ second disc summarizes chunks of its story with plain text, there having been no time to make cinematics or gameplay for those bits. However, the critics were shouted down, and among many RPG fans Xenogears remains an object of sacred veneration.

Later, Takahashi and his fellows formed Monolith Soft, and they started on a spiritual successor to Xenogears. This would realize their vision of a six-game-long epic – yes, count ’em, six – covering time, God, and the meaning of life through a story about robots fighting aliens. Monolith planned to subtitle all six games after books by Friedrich Nietzsche, to show they were really serious.

Namco published Xenosaga Episode I: Der Wille zur Macht in 2003. Many more critics shouted back this time, arguing that the “game” was a 35-hour movie with occasional interactivity. They had a point. Some of ‘Saga’s cutscenes were so long they needed two save points in the middle. Two more episodes followed before Namco said “enough.” Monolith chopped the hexology in half, forcing Episode III to open with an uncomfortable throwback to Xenogears. A plot gap left by a cancelled entry in the series was filled in with text.

So why the history lesson? Well, if nothing else, now you know why some of your RPG-playing friends shudder whenever they hear a word with “xeno” in it. And perhaps you can appreciate that Xenoblade is not just a good game, but likely the first game where its creators have hit the mark. You don’t need to be a cultist to enjoy it.

The playable characters generally look like a terrible train-wreck between Final Fantasy, Phantasy Star, and The Road Warrior. Everyone’s wearing butched-up chunky armor, overly accessorized, splattered with brightly clashing colors. Things get especially bad when, as happens so often in an MMO-style game, the party puts on different bits of different gear sets to maximize their stats – you’ll see characters sporting high-tech robo-armor on their bodies with wacky feathery headdresses on top of them, and all of it’s represented on the character models at all times, including every cutscene. Meanwhile, Non-player charcters turn up dressed in all kinds of inexplicable nonsense, up to and including neo-Regency formal wear. Complete with cravates.

It’s not that it all adds up to a bad look necessarily, but it’s the wrong look for a game that wants to have its cast deliver ostensibly serious dialogue. The style would work just fine in, say, another Phantasy Star Online, something where the characters aren’t supposed to be anything more than colorful action figures. In a game like that, building a ridiculous-looking character is supposed to be part of the fun.

In a story like Xenoblade…well, there are times when we’re supposed to feel a tug on the old heartstrings, and instead we’re just goggling at the mismatched day-glo clown outfits. Toning it down might have made life less amusing for the concept artists, but their sacrifice would have made the story more effective.

No new story ideas
Would the story work perfectly if somebody made the character design team take their meds? Well, it would help. It might not solve every problem, but it would help.

That said, someday the Japanese RPG business is going to have to call a moratorium on certain tendencies in storytelling. Yes, it’s nice to see love conquer all and triumph over the forces of fear and mistrust, but it’s been done. Sure, it’s great when two races of age-old enemies find a way to grow beyond their ancient struggles, but we’ve heard that song before. There’s something to be said when the hero of a game is a fresh-faced empty vessel with no personality beyond being a really swell guy, but…wait, no, that’s just stupid, period, and it needed to stop happening many years ago.

Western console RPGs have smartly started exploring different themes and story possibilities over the last 10 years or so, which might have something to do why they’re becoming more and more popular the world over. Japan could stand to follow the same path.

Long-time Xeno fans may have an extra layer of trouble processing the story, because they’ll be able to spot the specific bits and pieces that Takahashi and company recycled from their earlier projects. Not to spoil too much, but they really, really seem to like taking dead supporting characters and bringing them back to life as evil masked cyborgs. It was a neat surprise in Xenogears, almost 15 years ago. In 2012, we can kind of see it coming.

Baby steps, though, baby steps. Xenoblade has a reasonable average cutscene length. It more or less tells its story in the space of a single game. It does not contain wildly inappropriate religious imagery. It does not require a semester’s course in Gnostic philosophy or a copy of Twilight of the Idols to explain what is going on. The screen doesn’t ever go black for long stretches with nothing but white letters superimposed on top.

Most important of all, though, Xenoblade Chronicles is genuinely fun to play. It’s an RPG with an extra-capital G, a gameplay-driven game. That’s a sign of real progress from Monolith Soft, and hopefully promise of even better games to come.

Xenoblade Chronicles will be released on April 6, 2012 for the Nintendo Wii. A copy of the game was provided by the publisher for the purpose of this review.