If you live in a major metro, you might be more inclined to take surface streets over highways during rush hour. Google is now making that decision — and the decision about which roads are actually fastest — a lot easier with a new glut of traffic data.

Google Maps has long shown travelers traffic patterns for highways. The data lets you see traffic speed along a given route at a given time of day. The new intel will show the same data for non-highway streets and roads.

“Have you ever been stuck in traffic during the heavy morning commute, or found yourself late for dinner plans because you left work right in the middle of the Friday night traffic?” Google Maps engineer Szabolcs Payrits writes today on the company blog. “Knowing the usual highway conditions during certain times of the day, like rush hour, can help you avoid traffic. And if you plan to avoid these highways, it’s also helpful to know the typical traffic patterns on the surrounding arterial roads.”

The new data set will encompass typical traffic patterns for “important arterials in cities around the world,” the post continues. Here’s an example showing typical traffic for highways and roads in Los Angeles, the city where only a tourist would try to take the 405: 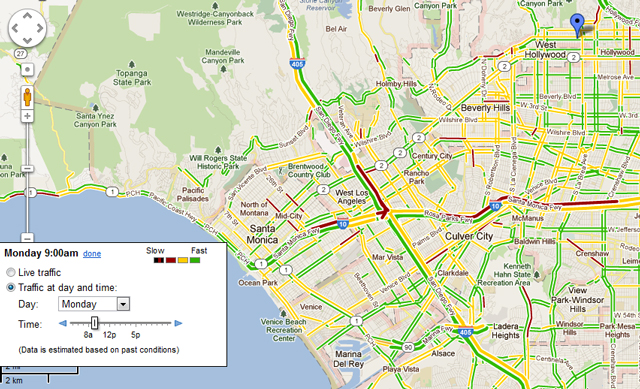 Look at that red-lined, traffic-jammed mess! Now, Google Maps, like a local, will tell you to take Sepulveda Boulevard instead: 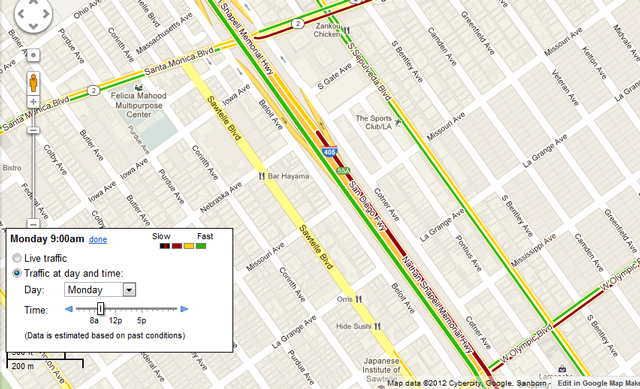 Also, Payrits notes, smartphone-using drivers can help the company improve its trove of traffic data by turning on the My Location feature on Google Maps for Android.