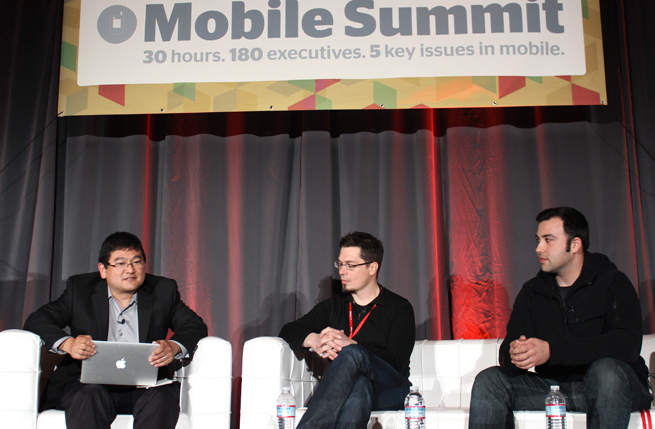 In the wild world of the app economy, there is an overwhelming concern about the cost of bringing users to apps. Budgets can be in the millions now for marketing an app launch, but execs from Iddiction and Tapjoy said at VentureBeat’s Mobile Summit 2012 today that it doesn’t have to cost that much to bring in new users.

Lead GamesBeat writer Dean Takahashi sat down with Iddiction CEO Andrej Nabergoj and Tapjoy VP Chris Akhavan to talk about user acquisition at the Mobile Summit event. Both Iddiction, which focuses on providing a platform for app discovery, and Tapjoy, which focuses on in-app advertising and discovery, have realized strategies for grabbing users’ attention and pushing them toward deserving apps for less money.

Tapjoy especially has been in the middle of the conversion about user acquisition since Apple banned lucrative pay-per-install apps, which Tapjoy had been pushing, about a year ago. Tapjoy changed some of its strategies to push Android apps instead and created a $5 million Android Fund to help game developers port their apps to Android.

Akhavan said that its Android Fund has been quite successful in helping promote and build a new generation of Android apps. He noted that with Tapjoy behind these small and mid-size players, they are able to grab users for much less than one of the big developers. “We’re figuring out the most cost-effective way to target your audience,” he said.

Iddiction CEO Nabergoj, on the other hand, stressed that his company is helping developers by providing a platform for building apps and giving them analytics. “We’re trying to build an exchange for developers and help expose their apps for free,” Nabergoj said.

Tapjoy’s Akhavan said that while Google has done a good job with app placement, it could do better. In the future, he said, targeting will greatly improve and companies like his will be able to help developers acquire more users.

“In the future, availability with targeting will be more prevalent,” Akhavan said. “You’ll be able to target by gender and be more relevant to target your audience. And of course, privacy will remain an important concern in this.”

Iddiction’s hope for the future is that the mobile industry’s biggest players will have better standards. “This is still a primitive time,” Nabergoj said. “There are not the same opportunities for everyone. Doodle Jump was able to build a massive brand without any marketing, but companies don’t often get to shine like that.”