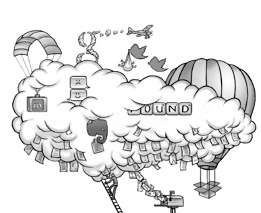 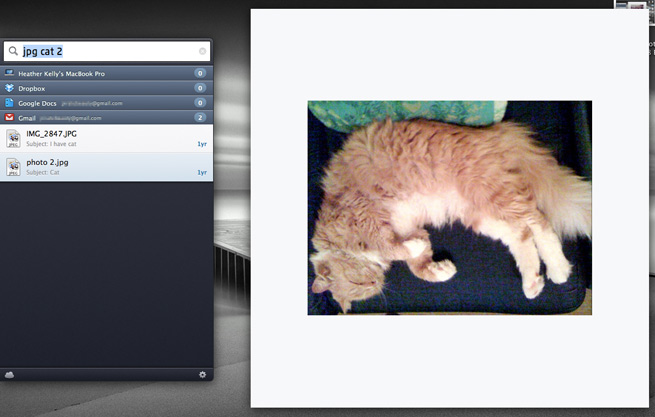 Found is a neat new Mac application that wants to be like OS X’s Spotlight, but for all the files you have stored across cloud services, including Dropbox, Google Docs, and Gmail. Currently in beta, Found is aiming for a mid-May release in the Mac App Store, where it will be free.

“We wanted to step back and say, what are some of the basic problems people have had with their search?” said Found co-founder Stephen Brady in an interview. He and his partner, Vijay Sundaram, decided the fragmentation of files across multiple devices and cloud services was a big issue today, one that could be solved with a single application.

The concept is simple: Need to find that photo of your cat wearing a bow tie, but don’t know if it’s in one of your three Gmail accounts, on your desktop, or in a Dropbox folder? Double click the Control button or click on the Found icon (it’s a titled F, not a pink stealth fighter) in the menu bar, and the Found search box will slide out from the left side of your screen. Start typing the name of a file or app (“cat tie”), and the results will appear in real-time, date ordered. You can narrow down the results by including a file extension (“jpg cat tie”). Arrow down and each search result will show as a preview in the middle of your screen. You can tab to jump between sources. When you do locate that photo of your kitty, hit Enter and it should open.

The Found application is in beta, so there are still some kinks to be worked out. Gmail attachments don’t seem to open if you’re logged into a different account in your browser, and it’s not yet as fast as Spotlight for searching your hard drive.

But even in beta, there are some nice touches that reflect smart, careful design and make me optimistic for the final product. For example, you can drag and drop a found file to anywhere else on your computer, including onto an open Gmail message where it will be added as an attachment. What will really make the product a must have is the addition of other services. Brady says he hopes to add support for Evernote, Box, and Salesforce in the near future. If they manage to link it to multiple devices, it would be a killer utility for every person with scattered files.

If you don’t want to wait until May to use the app, you can sign up for an invite for the beta version of Found on the company website.

The company was founded in 2010 by Stephen Brady and Vijay Sundaram, who met while working together at Microsoft. The co-founders are not yet divulging their plans for making money off the application, which will be free and have no ads. The San Francisco-based startup has five employees and has received 1M in seed funding from NEA and Rembrandt Venture Partners.