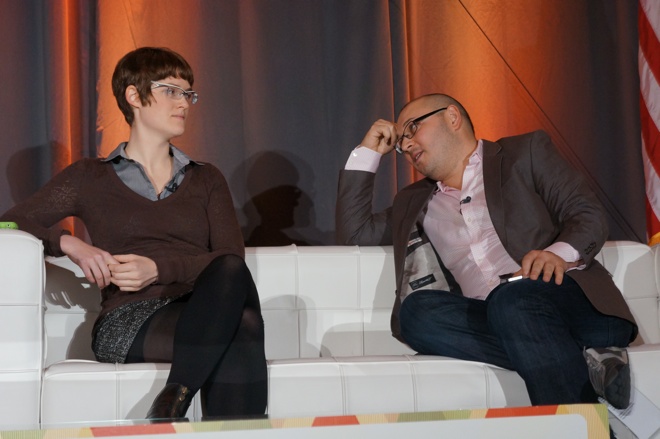 With the rising number of mobile devices equipped with accurate geo-location capabilities, we’ve moved on from interacting with our computers via solid buttons and liquid displays.

Now, it’s all about “air,” according to Geoloqi founder and noted cyborg anthropologist Amber Case.

Speaking at VentureBeat’s Mobile Summit today, Case explained how her fascination with the way humans used computers led her to the field of cyborg anthropology, and ultimately drove her to start Geoloqi, a company dedicated to providing a toolkit for location services.

With location services “the entire world can be a button… your actions can be a button,” Case said. She started Geoloqi (pronounced geo-low-key) because she felt nobody was building a platform that really unleashed the potential for location tech.

One specific feature that Geoloqi offers is geofencing, or the ability to trigger actions when you reach a specific location. Case thinks battery life is a major issue for mobile devices when it comes to geo-location services, (and the entire Summit audience agreed with her). That said, Geoloqi’s SDK offers a way for developers to manage battery consumption.

Case called out carriers for their inability to push location service innovation, which struck a chord with AT&T’s senior executive VP of technology John Donovan. He pointed out that AT&T (like Verizon) has been running innovation centers to spur new technology on their networks for some time.

Case is well-known for her insightful talks at the TED conference, and has spent much of her life thinking about the future of computing. So, her predictions about the value of geo-location are worth considering. Speaking of future tech, Case said she was particularly annoyed by the pristine visions of the future from companies like Microsoft (she’s certainly not alone in that).