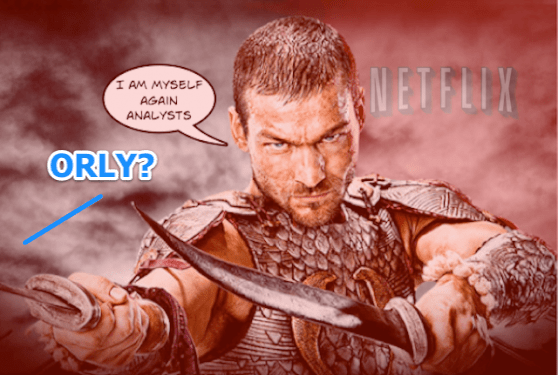 Video rental service Neflix may soon see a dip in its stock value thanks to a downgrade by Barclays Capital analyst Anthony DiClemente.

Netflix had a particularly rocky 2011, with a 60 percent price hike on combined streaming-and-DVD rental plans and a failed plan of splitting Netflix into two companies. The company was punished with a loss of more than half of its stock price. The stock appeared to have rebounded slightly in the last quarter with a better-than-expected subscriber growth boost.

DiClemente cited rising costs and a number of emerging competitors as the main reasons for its lower stock rating.

“Amazon Prime’s [streaming video on demand] offering could eventually be carved out as a stand-alone product that would compete more directly with Netflix for subscribers. Likewise, Comcast’s recently announced Streampix service could eventually be offered … as another direct competitor to Netflix,” he wrote in a report published today.

It’s very unlikely that Amazon will ever spin off its streaming service into a standalone product, as VentureBeat has previously outlined. And DiClemente’s suggestion that Comcast’s Streampix could become a direct competitor would be more accurate if the service wasn’t tethered to an expensive monthly cable subscription. But, as he suggests, that could change over time.

In terms of rising costs, Netflix went from spending 12 percent of its total revenue on streaming content in 2010, to spending nearly 50 percent in 2012, DiClemente cites. If you factor in that the company is spending money on streaming licenses in two new markets (Latin America and the U.K./Ireland) in addition to its domestic and Canadian service, those costs aren’t really that big of a deal. I’d imagine if Netflix decided to launch its DVD-by-mail service in new markets, that percentage would be quite a bit lower.

“While rising digital content costs are not surprising given Netflix’s shift to a streaming-only company,” DiClemente said, “we believe Netflix’s mounting off-balance-sheet obligations add a greater level of risk to future earnings and liquidity in 2013 and beyond, which will have to be supported through continued subscriber growth.”

Another big risk for Netflix, DiClemente said, is in the company’s expansion into international markets. The company can’t afford to fail in either of its two new international markets without seeing serious repercussions on its business as a whole. Also, both the U.K. and Latin American markets already have Amazon-owned LoveFilm, which will make success even harder to achieve for Netflix.