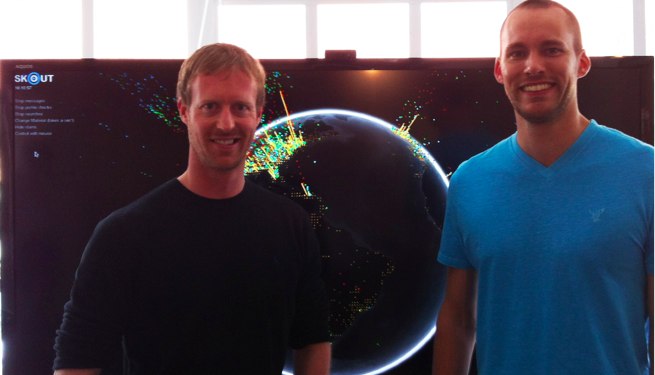 The makers of web and mobile applications for location-based flirting have landed a local conquest of their own.

“[Skout] is really helping people to meet new people … which is a part of human nature,” Skout CEO and founder Christian Wiklund told VentureBeat. “We have cracked the nut on providing a safe, fun, and healthy experience.”

San Francisco-based Skout, quite the Valley veteran, has been around since early 2007. It first started off as a Loopt-like location-based app but later pivoted to focus specifically on real-time, local connections. Skout launched its location-centric iPhone dating application in 2009 — a novel idea at the time. The application took more than a year to hit one million registered users, but today it adds one million new users each month, Wiklund said.

Skout is especially popular with 25- to 35-year-old busy, urban professionals in large metro areas and has impressively high engagement figures. The social application for iPhone and Android, which Wiklund likens to a mobile bar, rock concert, or salsa class, processes 300 million messages per month, and the average user signs in eight to nine times per day for a total of 45 minutes of application usage.

The five-year ride hasn’t always been so rosy. Eighteen months ago, Skout was down to three employees and its future looked rather bleak. But thanks to a combination of organic growth, paid user acquisition, and success on Android and Apple app stores, the company now has 50 staffers and pulls in enough money through virtual goods and ads to break even.

With the infusion of $22 million, however, Skout will go in the red as it spends to take over the world. The company will be investing heavily in global expansion and hiring more than 80 people to work in its San Francisco office.

“We want to really anchor Skout globally … and for that we need a big war chest,” Wiklund said. “With this money, we can deploy [Skout] very efficiently and aggressively and fork lift the whole business.”

This is San Francisco-based Skout’s first institutional round of funding. The company previously raised $4.6 million in Angel funding.