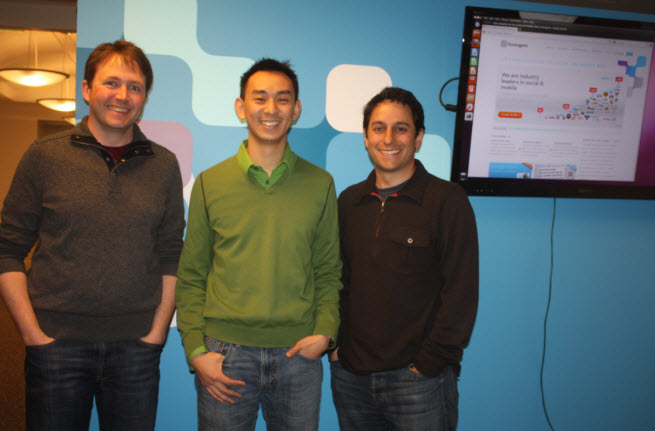 Kontagent is one of the companies that is rich with big data as it provides analytics services to more than 1,000 social and mobile apps with more than 150 million users. As such, it has been able to learn a lot about how to make money from these games.

Now the company is launching its new kSuite DataMine platform that will give social and mobile developers a dashboard so that they can better engage and monetize users. The tool is aimed at database experts, and it allows them to craft their own data queries so that they can extract the most interesting information about users on an anonymous level.

San Francisco, Calif.-based Kontagent has been working on the technology for a year so that game companies and app developers can tune their virtual economies and extract more money out of users. The technology is the same that Facebook uses to mine its own database. This data analysis can give developers a good answer about what is the exact cost of user acquisition. That’s important as torrid growth slows down for a lot of applications.

“It used to cost too much to do data mining in our industry,” said Jeff Tseng (pictured middle), chief executive and co-founder of Kontagent, in an interview with VentureBeat. “This is where there is a lot of room for innovation.”

The DataMine adds a new layer of flexibility and analysis to Kontagent’s existing kSuite analytics platform. It is available as an add-on monthly subscription to kSuite. DataMine provides analysts and business intelligence professionals with access to raw data, not just reports. Users with a basic knowledge of SQL can ask questions, test hypotheses, and slice and dice the data in any way they see fit.

They can figure out why users are leaving a game and what actions to take before they drop out. They can use the analytic tool to maximize virtual goods sales and review cohorts (groups of users) over time. DataMine can answer questions such as (from Kontagent’s website):

The big question is whether smaller developers can now do the same kind of analysis that big companies, such as Zynga, can. Zynga has opened its infrastructure up, allowing outside game developers to publish on its platform. But Kontagent can offer analytics — in case developers don’t trust Zynga with their precious user data. Still, Zynga has a huge advantage over its competitors because it is so good at user analysis, Tseng said.

“This is a big area we can address with this release,” Tseng said. “This levels the playing field.”

Miles Lennon, a vice president of product management at beta-testing company GameGround, said that the DataMine enables the smallest features and tests. Rivals include Flurry and Kissmetrics.

In a demo of the system, Evin Levey (pictured left; Dan Kimball, chief marketing officer, pictured right), vice president of product development, showed the different kinds of metrics that Kontagent can provide. It can show installs, Facebook invitations, level changes, page views, and little things, like what happens when you buy a special pig in a farm game. If you have a casino game, what would be the best way to bundle coins for users to purchase? This kind of tool can answer that question after analysts run their experiments.

If a game doesn’t engage the user until the 15th session, something is definitely wrong with it. Kontagent already has a couple dozen beta customers who have tried it out. Data is available on an hourly basis. A formal launch will happen in the second quarter.

“This changes the conversation dramatically,” Tseng said. “There’ no more fishing around in the dark.”