Said in the voice of Ryan Seacrest: Pick up your phones, America.

“American Idol” viewers can now use their smartphones (and tablets) to nab extra content and show music courtesy of hit music and television-tagging application Shazam, which recently surpassed 200 million users.

Shazam and Idol have partnered to “Shazam-enable” all remaining episodes, meaning that people can fire up the Shazam app, use it to tag an Idol episode at any point during the show, and discover bonus show-related content. Fans that Shazam “American Idol” will find links to buy contestant tracks featured in the show, tweets from show insiders, links to AI social media channels, and behind-the-scenes video clips and photos of contestants. 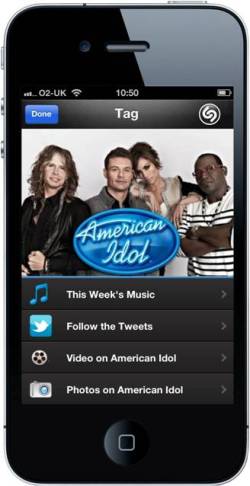 The TV-to-app initiative is part of Shazam’s push to appeal to television networks and advertisers looking to provide viewers with supplementary content on their second screen devices. The live broadcast TV-tagging partnership is the third major deal of its kind this year for the 10-year-old company so well known that it’s become a part of society’s vernacular (What’s that track? Shazam it).

“As we surpass more than 200 million users worldwide, this initiative marks another major achievement for Shazam — American Idol is the first live series following the successful Shazam for TV integration of this year’s Super Bowl and Grammy Awards,” Shazam CEO Andrew Fisher said.

The AI hookup also more directly pits Shazam against Yahoo-owned TV-tagging competitor IntoNow, which has far fewer users but continues to forge ahead with media deals and second screen content around events like the Republican debates.

And in a positive sign for both companies, Nielsen found that 88 percent of tablet owners use their devices simultaneously while watching TV, and are keen on discovering show-related information.