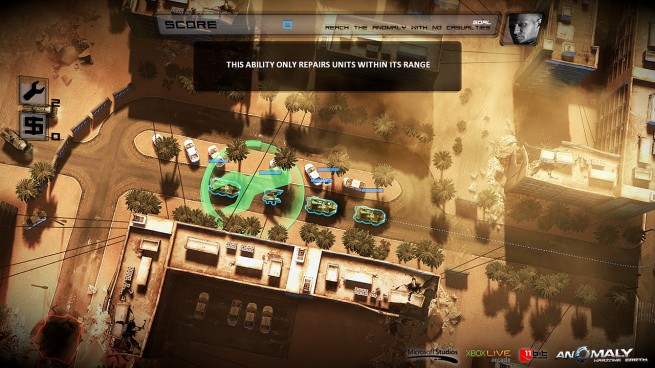 In the year 2018, an alien spaceship breaks in two and crashes on Earth. Terrible invading machines emerge from the wreckage and assemble treacherous gauntlets in the middle of Baghdad and Tokyo. Good thing they know how to implement gamification in their invasion….

Anomaly: Warzone Earth debuted on PCs and Macs last April then later appeared on iOS and Android. Well, now Anomaly is out on Xbox Live Arcade — a year after the initial release. Can it survive the transition from touch and click controls a home console?

In Anomaly, you guide a group of military vehicles through hostile city streets. You directly control the platoon commander and collect various power-ups that will help your tanks and jeeps through the endless assault from enemy machines. Rather than placing units to thwart attacks, you are the aggressor attempting to break through almost endless defenses to reach the inner “tower,” or ship in this case.

Anomaly is unique in adapting this real-time strategy mechanic without also requiring the player to defend a base. You’re an investigatory squad trying to get to the heart of this supposed alien invasion. You don’t have time to fortify a starting location and mine for resources. The action is much more fast-paced because of this and more appealing to players to whom the defense strategies required in RTS games like StarCraft might overwhelm. 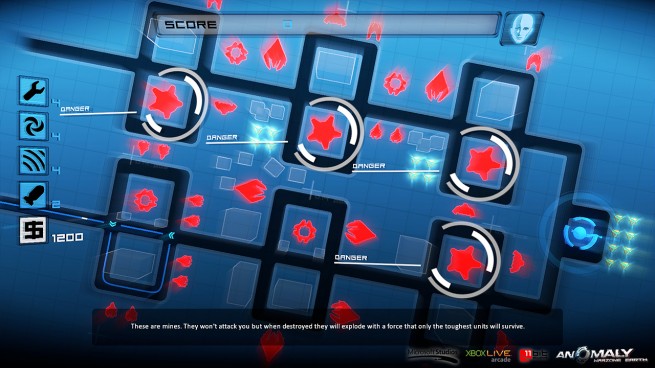 While the fictional representations of Baghdad and Tokyo are rather generic, that doesn’t make them any less beautiful. The developers have shockingly realized the environments in their use of lighting and depth. The machines and alien ships stand out as shimmering, otherworldly monsters in the devastated landscape.

Platoon vehicles navigate narrow streets following a set path. It’s up to the commander to make sure that their route doesn’t lead them into environmental hazards and ambushes. The street grids are positively labyrinthine, making it very easy to accidentally loop back into a dangerous situation. Careful planning is key. You can’t barrel directly toward your goal and hope to win. The maps are complex enough to allow for multiple strategies.

Anomaly unfortunately suffers from many issues that plague other PC/mobile ports: a frustrating interface that makes more sense when using your fingers or a mouse. Menu navigation is very clumsy with the 360 controller and sometimes leads to accidental item deployments and poorly chosen paths. While this issue isn’t severe enough to render Anomaly unplayable, it feels very clunky compared to the seamless action happening on the world map.

Upgrading and buying new units is awkward and unintuitive. The menu is very dark and laid over a dimmed backdrop, which makes reading text a chore. It feels like an iOS menu stretched out across a television screen and works about as well. 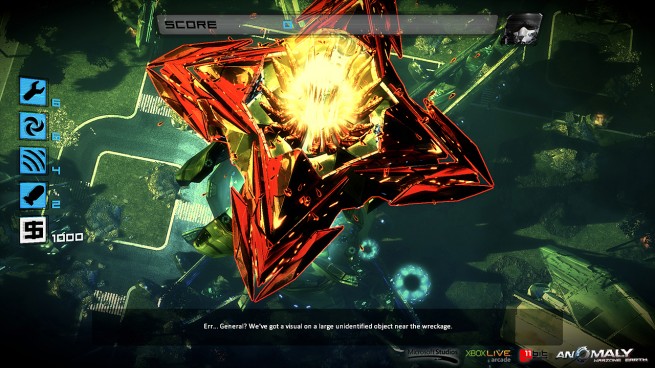 Anomaly: Warzone Earth is an inventive take on classic tower-defense mechanics that is a great fit for just about any platform, but the jump from click-or-touch to gamepad input is infuriating. The main campaign mode is extensive for a downloadable title, and several trial levels and three difficulty options are available for you to explore.

While it’s hard to control, Anomaly is still playable and enjoyable as long as you take the time to really master the interface first.

Anomaly: Warzone Earth was released on April 6, 2012 for Xbox 360. The publisher provided GamesBeat with an XBLA download code for the purpose of this review.