I have about 16 long boxes filled with comic books that are trapped with in plastic covered sleeves that haven’t been touched in well over five years now. Every time I move, I contemplate selling them off or donating them to an organization that wouldn’t just throw them away. I no longer even use the custom comic book boxes, nor do I protect them in shiny plastic with cardboard backings. I do, however, enjoy reading comics, which is why I’ve never been able to give them up. So, the thought of getting my comic books digitally was very appealing to me.

After talking to countless people who are unsure where to start, I’ve created a guide of sorts to help navigate through the new world of digital comics.

Devices you can read digital comics on 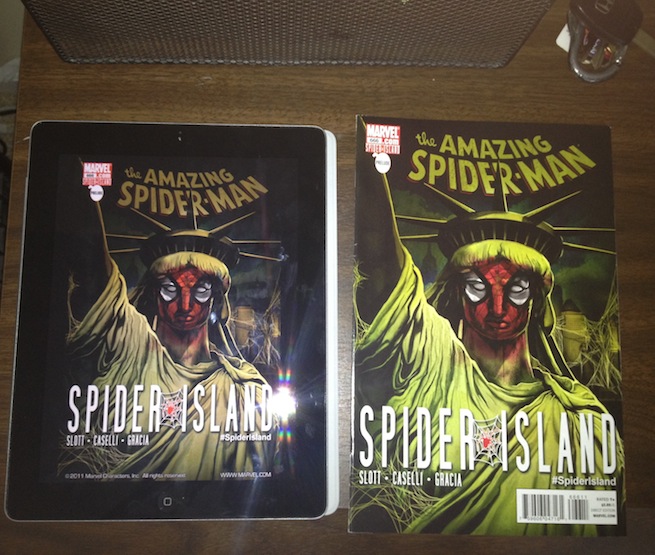 If you have a computer with a web browser and a working Internet connection, you can read digital comics. However, it’s not the best experience since you’re facing the screen rather than looking down like you would with a traditional printed comic.

There are plenty of options available on smartphones running iOS and Android, but be warned that you’ll likely be reading panel-by-panel due to the smaller screen size.

The best tool for enjoying a digital comic is a tablet. The larger 10-inch tablets, like the iPad (starting at $399) and Motorola Xoom ($499), offer the best possible experience because their screens are comparable with the dimensions of a regular comic book (see side-by-side comparison photo above). This option is also the most costly, but if you’re serious about trading in dozens of heavy comic boxes for a single device, it’s a good investment.

A second tablet option is the 7-inch Android-based tablet, which is less than half the cost in most cases. The two that stand out the most are Amazon’s Kindle Fire ($199) and Barnes & Noble’s Nook Tablet ($199). The downside is that you’ll have to do far more pinching and zooming to read the text within the word balloons.

Where to buy digital comics 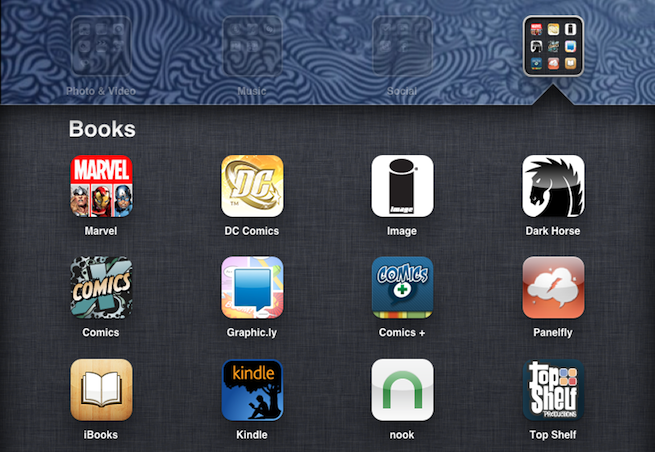 It is a good idea to try all of the possible platforms out before unloading a lot of cash, because if you decide to switch to a new service, you typically won’t be able to take all your purchases with you.

Direct from the publisher
The most visible choice for buying digital comics is by going through the publishers, which have their own set of online stores via official websites or mobile apps for both Android and iOS. Unlike music and movies, when you buy a comic in this way, you’re often times only buying access to that media. It exists in the cloud.

To go this route, you’ll need to sign up for an account for each publisher, then pay for the product. In most cases, you’ll have access to all your purchases from a particular publisher in all of their official platforms/apps. For instance, if you buy Spider-Man issue #489 in the iPhone, you should be able to read it on the iPad later, provided you sign in with the same account.

If you want to collect all the digital comic book purchases you’ve made from multiple publishers (DC, Dark Horse, etc.) into a single location, your options are quite limited. 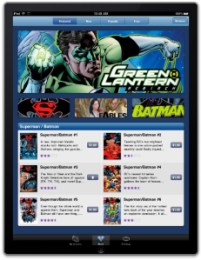 One option for reading all your comics in a single place is Comixology, which has the widest selection of titles from the majority of the industry’s big publishers. It’s also the only place that offers both DC and Marvel comics in the same store. If you’re serious about making the transition to consuming comics digitally, you definitely need to check out Comixology before anything else, if only for the sheer variety of content available.

You can purchase comics from Comixology through its web store as well as its official applications for iOS and Android. Like with the official publishers apps, the books can’t be transferred off the device and will primarily exist only in officially supported Comixology platforms.

If you’ve only ever casually browsed digital comic book apps over the past year or so, chances are good that you’ve used Comixology’s store. The company is responsible for powering many of the most popular comic book publishers’ iOS digital storefronts, including DC Comics, Marvel, Top Shelf, Image Comics, Boom! Studios, Zenescope, and Dynamite Entertainment. Its technology is also used to power a handful of popular comic book “branded” apps, such as Scott Pilgrim, The Walking Dead, Bone, and the Green Hornet.

If you buy a comic through one of these specially branded app stores, or one of the Comixology-powered publisher apps, it’ll show up within the main Comixology app, and vice versa. But, not all publishers use Comixology to help sync up purchases. For instance, Dark Horse, publisher of Star Wars and Buffy the Vampire Slayer comics, makes many of its book available through Comixology, yet maintains its own independent application. If you make a purchase using Dark Horse’s digital store, you have to read it within the official Dark Horse apps. The same is true about syncing in other online third-party digital comic shops such as Panelfly and iVerse.

Apple’s iBooks
Previously, the selection of graphic fiction on Apple’s iBooks store (which works on all iOS devices but not Macs) was limited to a handful of titles that you couldn’t easily find due to the lack of a proper category. However, since Marvel’s introduction that seems to have changed. There is a now an official category featuring over 1,500 graphic novels that you can sort via a featured home screen or release date. Pricing is lower than traditional retail stores and comparable to discounted physical graphic novels on Amazon. To view the graphic novels you’ll need iBooks 1.2 and iOS 4.2 or later on your mobile device.

iamond Distributors, iVerse, and not giving up your physical comic books
The new player in the digital comics platform front is iVerse’s new digital comic app store, which is partnering with the industry’s biggest distributor of physical comic books, Diamond. The iVerse apps for iOS and Android will work in conjunction with Diamond’s initiative to empower retailers to sell digital comics both in-store and online. Customers will be able to shop through thousands of digital comics any time of day on retailer websites, or to purchase digital codes along with their print comics when they visit their local comic shop.

Marvel is ramping up a similar physical/digital offer. When you buy one of the printed comics, you’ll received a code you can enter at Marvel’s website to obtain the digital version for free. I tested this out with Brian Michael Bendis and Mark Bagley’s new Avengers Assemble series, and was able to view the digital version on Marvel’s official apps as well as Comixology.

Most publishers are finally coming around to the idea of releasing digital copies of comic books on the same day they hit retail shelves. However, if you’re looking for a deal, you may not necessarily find it. While Marvel is giving away free versions of its digital comics to those who buy the print version, it also offers those same digital copies for sale at the same exact price. DC’s digital/print combo usually costs about a dollar more, but the company does discount its digital copies a month after the book is released. Other smaller publishers vary in terms of price, but I’ve found that most offer the digital version for a bit less.

It’s also worth noting that most of the digital comic shops/apps offer generous one-day sales that slash prices to 99-cents on select books. 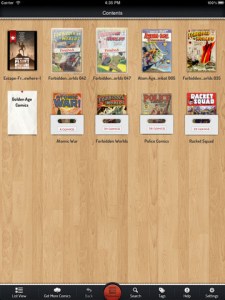 Above: Comic Zeal for iPad

If you’re considering converting your existing collection of printed comics into digital form, please note that this will require lots of time, effort, and energy with mixed results. For the sake of this article, I attempted to convert one of my own comics by carefully tearing out each page and then scanning them onto my computer. I found that sometimes the other side of the page would bleed through to show the other side, which was frustrating. Also, once I got the 22-page book uploaded, I had to convert it into a suitable size and format so that it could be used across all my devices.

If you’re reading on a desktop computer, you can leave the file as a PDF (I chose to use universal image app Xee for Mac OS X). If you plan to upload your comic to a tablet or smartphone, you’ll need to do a few things.

First, you’ll need to convert the digitally scanned version of the comic into a .CBR or .CBI file. Not only will this reduce the overall file size without sacrificing the image quality, but it’ll also make it compatible with most independent comic book viewer apps. And second, you’ll need a comic viewing app.

Depending on your device, there are a couple of different apps I would recommend. For iOS, I’d suggest using Comic Zeal ($4.99), which has a ton of customizable options and a companion app for your desktop that allows you to wirelessly upload files to your device. For devices running Android, I’d try Perfect Viewer (free) and anyone with a TouchPad should check out Comic Shelf HD ($1.99).

As print prices continue to rise, more and more publishers will start looking for refuge in digital publishing. The digital comic book industry is booming like never before, bringing in $25 million in sales for 2011, which is triple the amount from 2010. There are likely a few reasons for this upward trend, the biggest being the rise of the tablet computer, the desire by many long-time comic book fans to cure boredom, or the repulsiveness to enter into a modern brick-and-mortar comic shop after watching Kevin Smith’s Comic Book Men reality TV show on AMC.

Whatever the reason may be, more people are getting their comics digitally. It’s nice that the comic book industry is starting now rather than waiting until prices are so unbelievably high that people disregard their moral compass (a.k.a. pirating comics illegally). I think eventually, everyone who produces comic books via a cloud service (which is pretty much every notable publisher at this point) will need to settle on open standards that allows comic fans to take their collections with them regardless of service.

Since this has yet to happen, the best solution for now is to purchase comics through publishers’ Comixology-powered digital stores. A company like Marvel or DC isn’t going to allow the record of everything you’ve purchased to suddenly disappear, because such a move would most definitely justify acts of piracy and unadulterated rage from angry fanboys and fangirls.

The system isn’t perfect yet, but the outlook for digital comic books is bright and will only get better going forward.