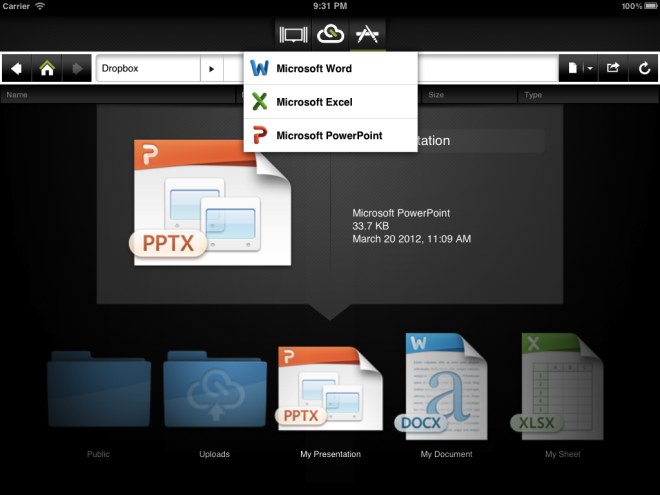 The race is on to bring true productivity software like Microsoft Office to tablets. OnLive debuted its Desktop app earlier this year, which lets you command a virtual Windows desktop from the iPad or Android tablets, and now a smaller competitor has emerged with its own spin on bringing Office to the iPad: CloudOn.

The Palo Alto-based company is releasing version 2.0 of its free iPad app today, which lets you create, edit, and share files from Microsoft Word, Excel, and PowerPoint. Unlike OnLive Desktop, the CloudOn app doesn’t distract you with a full Windows desktop but instead offers access directly to software you need. And to make up for the iPad’s confusing file system, you can access files saved on cloud storage services Box and Dropbox.

I met up with CloudOn CEO and founder Milind Gadekar in a trendy San Francisco restaurant last week, and he gave me the full skinny on his vision. Like me, Gadekar believes that tablets are currently best suited for consuming information, but they still lag behind when it comes to getting real work done. With CloudOn and its accompanying cloud storage services, he’s helping to turn the iPad into a virtual desktop computer. And unlike OnLive, which had to rework its service recently to run Windows Server 2008, he says that there aren’t any issues with CloudOn’s Windows licensing.

Gadekar demonstrated his app running on a new iPad over Verizon’s LTE 4G network. He was able to open and edit files from Dropbox without issue, and the experience seemed only slightly slower than a typical PC. The CloudOn app lets you use all of the advanced features of Microsoft Office as well, including track changes in Word, and pivot tables in Excel.

The CloudOn 2.0 app also includes Adobe Reader, so you can use the app to view PDFs, as well as an image viewer for practically any file type.

Gadekar tells me that he initially targeted netbooks with CloudOn, as those tiny computers often shipped without expensive software like Microsoft Office. But as the netbook category fizzled, he was perfectly positioned to bring the technology to the iPad.

I suspect we’ll see many more companies trying to solve the productivity problem on tablets, but with CloudOn and OnLive Desktop, we’re off to a very interesting start. CloudOn, in particular, is an IT worker’s dream since it doesn’t give users a desktop to potentially screw up (or be confused by). And since it can tap Box for file storage, the app can also take advantage of the extra security that service features.