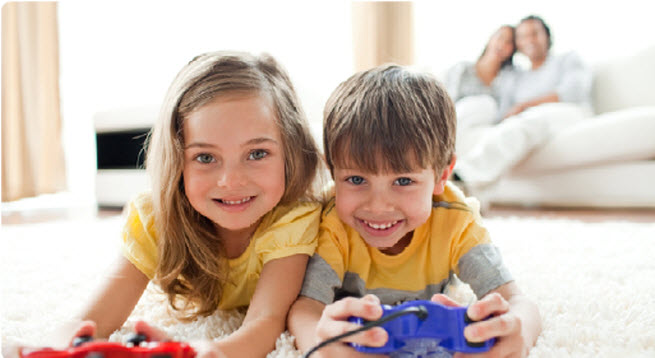 Relax, parents. Video games are good for you and your kids. So argues Scott Steinberg, author of The Modern Parent’s Guide series for high-tech parenting.

Steinberg, who also serves as a game industry consultant at TechSavvy Global, has launched a free tip sheet for parents on his web site. In it, he talks about the educational, physical, and job-related benefits that gaming offers. He’s not suggest that your kids play the mature-rated Grand Theft Auto series; rather, he thinks that age-appropriate games will result in all sorts of benefits.

He says that research supports the positive nature of play, and he notes that the vast majority of titles are now family friendly.

“Parents, politicians and educators frequently criticize video games as an alleged waste of time that distracts kids from healthier activities such as homework and outdoor play,” Steinberg said. “But research is quickly demonstrating that gaming can be a perfectly beneficial and well-rounded part of a healthy, balanced media diet.”

Olson argued that even games that are not labeled as educational can encourage planning, problem solving, and creative self-expression, and can spark interest in history or geography. Still more encourage socialization, exercise, healthy competition, and leadership.

Meanwhile, Jeffrey Taekman, director of Duke University’s Human Simulation and Patient Safety Center, has concluded that “serious games and virtual environments are the future of education.” Games can help students deal with cultural differences or irate consumers — mainly by enabling people to deal with evolving scenarios, making more informed choices, seeing immediate consequences, and shifts in tactics. The tip sheet offers a bunch of other supporting research as well, pretty much aligned with the views of the game industry’s trade group, the Entertainment Software Association.

“Games can definitely be good for the family,” says Patricia Vance, president of The Entertainment Software Rating Board (ESRB), which assigns video game ratings. “Oftentimes I think parents feel that they’re not because video games in the media are portrayed as violent, and hardcore games tend to get the lion’s share of publicity. But parents need to be comforted knowing that E for Everyone is by far the largest category. Nearly 60 percent of the almost 1,700 ratings we assigned last year [fall into this category].”