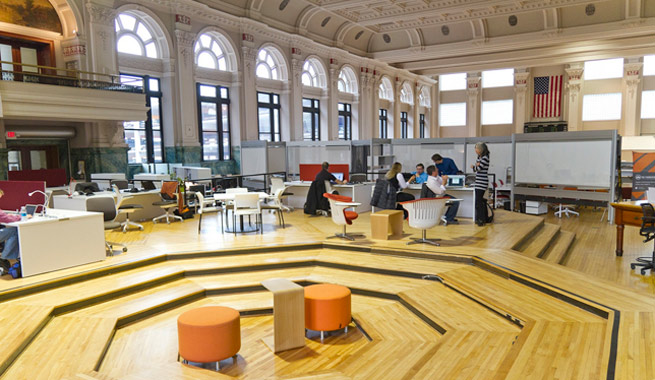 If you’re a startup, you’ve probably considered joining an incubator. But residency can be competitive and the requirements stiff. TechStars and Y-Combinator are well-known incubators that offer funding, mentorship, and access to a community of venture capitalists and anointed digerati — but only for a select few. Applicants also have to provide detailed business plans and disclose development, operational, marketing, and sales activities to get into the club.

There’s another alternative that might actually be a better fit for the majority of startups: co-working spaces.

Co-working spaces offer more freedom and flexibility than traditional business incubators. For many startups — those that don’t want need the full range of incubator services, or that want more control of their company and don’t want to be apprenticed to someone else’s vision — co-working offers the perfect alternative. Co-working may actually be a better environment for startups because it gives them what they really need. VentureBeat, based in SF, uses WeWork for its small but growing NYC staff. WeWork, which also has locations in LA and SF, allows easy expansion of space as we scale up our team.

Gangplank in Arizona started out as an incubator in the traditional sense: “We put together a C Fund and held a process similar to what Y Combinator or TechStars do today. We funded businesses, and we ran those businesses inside of Gangplank, as well,” said co-founder Derek Neighbors. But then they realized that the mix of companies working in a shared space was creating unexpected synergies.

“What we started to see was the formula of small companies working together actually helping put together the environment necessary for all of them to succeed,” Derek says. They realized the real missing ingredient — having a supportive community. “What’s missing for struggling startups is not capital funding, and it’s not lack of talent, right away. What’s missing is putting the people who are doing things in the community together to basically ignite the community to be even stronger.”

Consider these other benefits of working in the same shared office with other like-minded entrepreneurs:

Grow at your own pace. While many incubators provide a structured environment that demand startups meet benchmarks as a resident, co-working spaces let you grow at your own pace. Memberships are flexible, offering space by the hour, day, or month. Jason Richelson, a former member of Hive at 55, agrees that co-working makes it easy to save money, especially for the entrepreneur just starting and trying to reach a sustainable operational level. “You don’t want to commit to a lease in the initial stages of a new company, so going month-to-month is the only way for startups.”

Learn from others. Rivaling the best incubators, co-working spaces organize an array of events and programs ranging from brown bag lunches and networking nights with different experts and sponsors, to workshops on topics like “VC pitching” and “Ruby on Rails.” Cospace in Austin teams up with GeekAustin, which provides regular development classes. TechShop offers a variety of free DIY classes, on topics such as laser cutters, silk screening, AVR micro-controller programming, and AutoDesk modeling — ideal for the startup testing product prototypes. Co-working spaces are best for self-directed learners who prefer to choose the classes and programs they attend.

Partner up or share ideas. At a co-working space, where collaboration is not only encouraged but also cultivated, you get the opportunity to harness your coworkers’ collective brainpower for the benefit of your startup. Sometimes, good things happen from a serendipitous seating arrangement. Doug Naegele, who runs healthcare software company Infield Health, and is a member of Affinity Lab, recalls how a simple conversation with a neighbor led to a new, exciting venture. “The person I sit next to recently won a Ford Foundation grant to help alleviate food deserts in Washington D.C. We came up with the idea of supporting the vendors and patrons of the Pop-up Farmers Market through text messaging. Two months later, we’re actively trying new ideas around health, food deserts, and mobile technology,” says Doug.

Get exposure and support. The expansion of Greg Wilder’s Orpheus Media Research, a music search and discovery platform, which closed a Series A round and opened headquarters in New York City, owes much to its co-working community at Indy Hall: “Every key person involved in the company today can be connected in some way to co-working networks or co-working connections.”

If you still don’t think that co-working spaces are rigorous enough, consider that many do partner with accelerators and incubators. CoCo teams up with Project Skyway, a tech accelerator that provides software companies early stage seed money, mentoring, and networking. Dogpatch Labs focus on helping launch startups using its connections with Polaris Ventures. Its most famous alums include Instagram and Task Rabbit.

Co-working shifts the startup mentality away from the tunnel-vision focus on getting funding, and onto the “first-things-first” task of growing a company culture, developing ideas, and most importantly, nurturing support networks.

Genevieve DeGuzman is the co-author of Working in the UnOffice: A Guide to Coworking (Night Owls Press), a collection of stories from over 33 startups, small businesses, and nonprofits, as well as 19 co-working space founders across the country, all working and thriving in shared and collaborative workspaces.