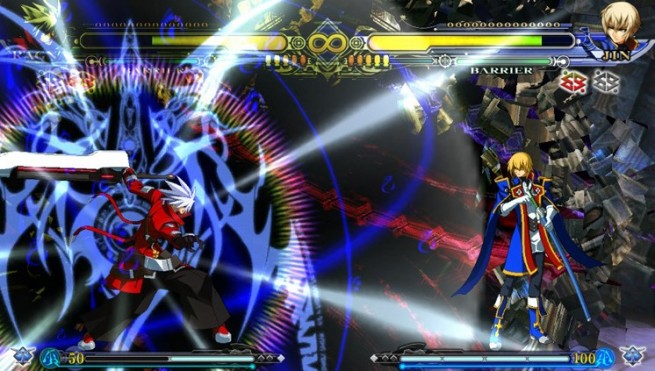 Developer Arc System Works is no stranger to crafting beautiful hand-drawn 2D fighting games. Previously having worked on the Guilty Gear series, ASW has taken over a decade of experience and honed it all to manifest their magnum opus with BlazBlue: Continuum Shift Extend (an enhanced version of the second BlazBlue title).

Aside from what are hands-down the most stunning HD visuals on the Vita, Extend offers a sizable selection of varied characters to choose from: gunslingers, ninjas, robots, cats girls… there’s something for everyone. The character design is imaginative, and each fighter has a robust moveset of combos and special moves that feel truly unique, as opposed to carbon copy clones with slightly different fireball and uppercut attacks.

The main menu is bustling with 16 different options and modes: arcade, story, time attack and survival, as well as a few interesting variations and a gallery mode with tons of unlockable content. Rather than repeatedly gouging customers with old DLC, Extend smartly includes all previous premium console characters (a total of four) at no extra charge, and even gives them new story campaigns. Capcom could learn more than a few things from Arc System Works.

The two biggest issues holding Continuum Shift back are the platform on which it was released, and the thorough story elements that unfortunately tend to drag or otherwise lack imagination. The Vita was simply not designed for fighting games (despite the large number of them being released for the handheld), but this can be remedied by buying a console version of the game. The story, however, is quite exhaustive, though not always in a good way. Characters are fleshed out, but cutscenes and dialogue can go on for too long or generally be painfully cliche. Arc System Works is the leader in providing deep story in its fighting games, but the quality of writing doesn’t quite match the excellent voiceover work.

CONCLUSION
Whether you want to just button-mash with friends, auto-pilot through the story on easy mode, or compete online, BlazBlue: Continuum Shift Extend can be as shallow or deep as you want it to be. It’s not only the best-looking 2D fighter ever created, but in my opinion, it’s also one of the best and most feature-laden fighting games period — a statement I do not make lightly.

BlazBlue: Continuum Shift Extend was released on February 22, 2012 for the PlayStation Vita. A copy of the game was provided by the published for the purpose of this review. 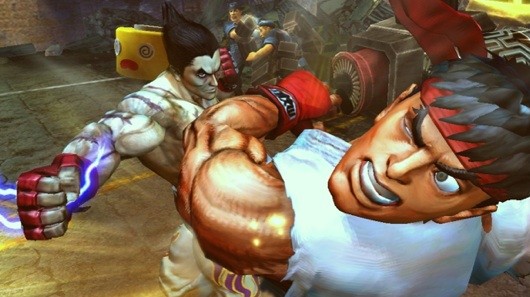 At its core, SF X Tekken has some good ideas and mostly solid gameplay. Sporting a massive roster of 38 brawlers split between the Tekken and Street Fighter franchises, there’s a lot to like. Street Fighter IV’s focus attacks have been removed, but in their place are a slew of crossover and tag-specific moves, plus a truly game-changing new charge technique that unleashes a free Super at its highest level. The Tekken characters have all been dumbed down to a Street Fighter level, losing intricate combo strings and mix-ups in favor of basic quarter-circle (“fireball”) variations. Countless signature moves have also been stripped away from the Tekken crew, so you’ll have to learn your favorite character(s) all over again.

There are also a handful of concepts that weren’t properly fleshed out or balanced. The Gem system, a throwback to the good old days of Marvel Super Heroes, feels a bit alien in the Street Fighter universe, and has all but ruled out SF X Tekken from being included in the pro-gaming circuit. Likewise, the Pandora system, where a near-death character can be sacrificed to temporarily overpower the remaining combatant, is thoroughly useless. Once activated, you have mere seconds to finish your opponent before you automatically lose. A better method would be to sacrifice a character with full health at the beginning of the round, pitting your one suped-up fighter against your opponent’s duo.

Capcom half-heartedly attempted a story to mixed results. Characters have unique interactions and cutscenes, but only if you matched them with their pre-ordained partner. These pairs are only ever from the same franchise, which is a missed opportunity. Lag and various other technical issues mar the online experience, and the highly-touted pair play feature was not included in the Xbox 360 version — a move Capcom has stumbled over its own words trying to explain and is now answering for with the Better Business Bureau. 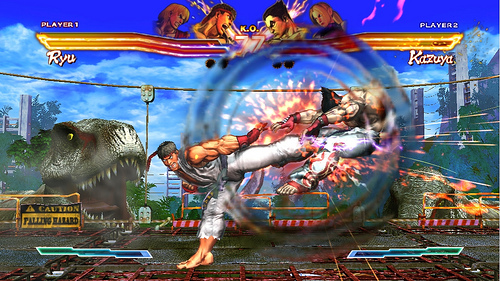 By far the worst offense is that Capcom saw fit to disable and lock away huge chunks of on-disc content. This includes — but is not limited to — 12 characters and approximately $100 worth of costumes (two for each character, at $1 a pop). Vital features such as preset combos and character customization are unnecessarily restricted out of the box, despite everything being confirmed as on-disc. Hackers have even unlocked said content and are now rampaging online in Ranked matches with the new characters.

CONCLUSION
Capcom has crafted a video game crossover that few would have ever believed possible. Part of that disbelief will undoubtedly come from how poorly the Tekken characters’ signature style and feel were retained during the conversion, and the rest will come from the major bugs, missing features, and locked content. While there is a competent fighter to be had, the woeful way in which Capcom has blatantly stripped out significant chunks and promised features, or locked away vital content that already exists on the disc, all with the vile intent of having you pay for it again, makes this a hard game to recommend.

Since Capcom only seems to think about your wallet when releasing its games, you should too before buying into their bullshit.

Street Fighter X Tekken was released on March 6, 2012 for the Xbox 360 and PlayStation. An Xbox 360 version was provided by the publisher for the purpose of this review.