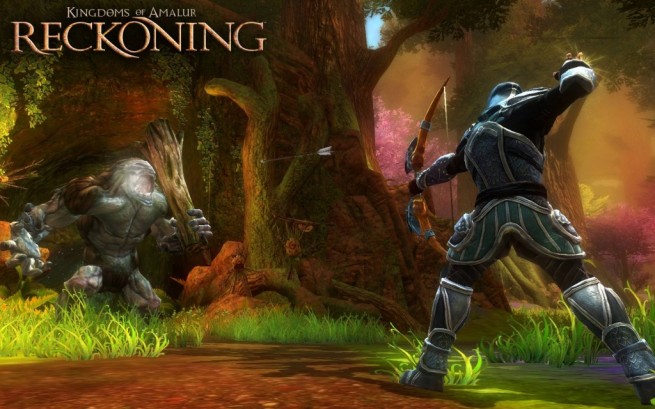 Kingdoms of Amalur: Reckoning should have been better than this. On paper (and in commercials, and on talk shows, and in press releases), the game sounds like the second coming for the fantasy genre. 38 Studios has attached a number of recognizable names to the new game, including Todd McFarlane, Ken Rolston, and R. A. Salvatore. Any combination of the above-mentioned superstar talent would have been enough to take notice. But big names do not always equate to big results, apparently.

The first thing you’ll notice about the game is that the visual don’t look anything like Todd McFarlane’s work. After spending dozens of hours exploring this game, I never once came across a character or monster or environment that would suggest otherwise. If you held up a bunch of games and made me guess which one McFarlane was involved in making, I would guess KoAR last, even if the other games were Angry Birds and Pong.

In fact, I couldn’t tell you who’s style the game’s visuals belong to, as it’s completely devoid of any distinct identity of its own. Caught somewhere between Fable and World of Warcraft, the game is neither hyper-stylized nor realistic enough to be notable in any way. It looks like a current generation massively multiplayer game, where the graphics are good enough to not be considered “bad,” but also have to be watered-down enough to bear the weight of hundreds of players in the same game world at any given time. And that’s not at all a coincidence, considering 38 Studios’ next game will, in fact, be an Amalur MMO.

Next up is R.A. Salvatore, the famed author of The DemonWars Saga and many Forgotten Realms novels, including those that birthed and featured one of the most popular Dungeons & Dragons characters of all-time, Drizzt Do’Urden. Salvatore knows his fantasy, there’s no denying that. But does he know how to turn that knowledge and experience into a compelling interactive experience?

If using KoAR as the only example, the answer is a resounding “no,” as Reckoning’s story is easily the biggest chink in the game’s flawed armor. 38 Studios has eagerly touted some 67,000 lines of dialogue, and I couldn’t have cared less about a single one of them. Whether you’re talking to a lowly villager who is admittedly too lazy to go fetch a rock five feet away, or you’re discussing the fate of the world with the main campaign characters, the dialogue could not be less inspired if it tried. Everywhere you go, there’s a surplus of useless NPCs waiting for someone to come along and run some menial errand for them. And why shouldn’t that person be you? It’s not like your character has other stuff to do (like save all of Amalur). Could you imagine just waiting outside a McDonald’s until President Obama came along, and then telling him to go inside and pick up your cell phone that you left in the bathroom? Maybe there are giant mutated spiders in the bathroom, maybe there aren’t. Somewhat unique to Reckoning is how honest most characters are; a good deal of them will flat-out tell you that they are cowards, and that’s why you have to order their Big Mac for them. 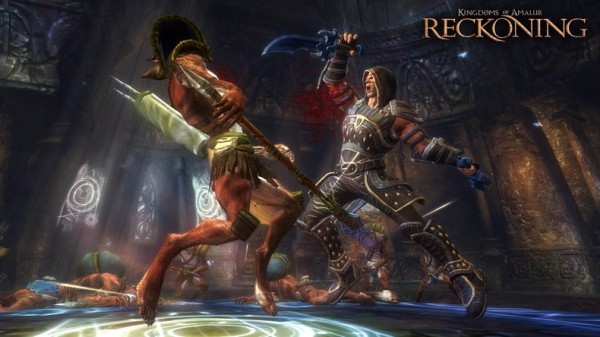 Do I expect R. A. Salvatore to write all 67,000 lines of dialogue? Of course not, especially since he’s only credited with creating the universe and lore behind Amalur. So much of the blame lies with the team at 38 Studios and Big Huge Games. Yet what does it say about your lore and universe when the framework you’ve laid produces only meaningless threads? Again, the “feels like an MMO” factor weighs heavily on KoAR, as the focus in most online games is about the quest itself, not why you’re doing it or who you’re doing it for. “I need 10 venom sacs to complete this potion for bla bla bla.” Sound familiar? The lay-up for essentially every quest in an MMO, and Amalur, is completely interchangeable with random words. If I snuck into 38 Studios and discovered the writing team consisted entirely of manatees, I would not be surprised in the slightest.

With the story decrepit and the graphics a point of contention, that leaves the gameplay to elevate KoAR beyond mediocre status. Enter Ken Rolston, previously the lead designer on The Elder Scrolls III: Morrowind and The Elder Scrolls IV: Oblivion. Reckoning wears its direct heritage to The Elder Scrolls series on its sleeve, and in many ways that’s hardly a bad game to use as inspiration. But don’t be fooled, this is The Elder Scrolls Lite at best. And since the two games were developed simultaneously, Reckoning is now competing with Skyrim (rather than the six-year-old Oblivion), which is the notably superior experience. From the onset, Rolston reveals that he hasn’t learned any new tricks since his last game: Before you even step foot into the world of Amalur, the character creation screen demands that you choose your skill bonuses. But what does Alchemy do? How important is Dispelling? Will you need Detect Hidden right away, or later on in the game? KoAR doesn’t tell you at all, and Oblivion made the same exact mistake. Bethesda very specifically opted to evolve the gameplay so that you naturally leveled up skills as you used them in Skyrim, but no such luck here in Amalur.

KoAR takes place in the massive Faelands, and allows you to explore in any direction you want. You’ll discover towns, cities, and no shortage of people who need your help. As mentioned though, the quests and dialogue are ultimately meaningless, unlike Skyrim which tends to have more compelling story-driven incentives. If you just follow the main story from beginning to end, Reckoning can be completed in under 25 hours. Not bad, but less than half of the 50-60 hour minimum Schilling has been touting. Beyond that, there are countless optional quests and tasks to take on, as well as a handful of Houses to align with, which are essentially KoAR’s version of guilds in The Elder Scrolls. For completionists, there’s well over 100 hours of gameplay here–but the game wears out its welcome long before that.

Unlike Skyrim or even something like Dark Souls, where you’re constantly finding better equipment and unlocking powerful new skills, Reckoning caps out pretty quickly. Within 20 or so hours, I had only changed my armor and weapons a total of three times. Everything else I found (which was a lot) was sold off. Every five steps you find a new piece of armor or weapon, but instead of wanting them for myself, I was always excited to see how much I could pawn them off for. And soon I had millions of gold piled up, to where money wasn’t an issue anymore either. 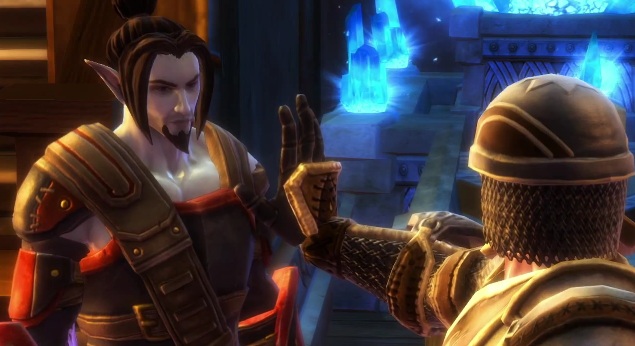 Despite all of its flaws and the initial disappointment that inevitably sets upon you after digging into the game, I did start to have a bit of fun the longer I played. I accepted that this wasn’t the supreme version of Fable or action-oriented Oblivion that I was hoping for (and promised), but rather a simple dungeon-crawler with a massive open world and the neverending satisfaction of just getting “stuff.” Whether it was money or potions or crafting materials or unique sets of armor and rare weapons, KoAR delivers a basic fulfillment that I had not found in other similar games. I had tried titles like Risen and Two Worlds seeking to satiate that same material greediness, but the low production values and sketchy gameplay immediately turned me off. Torchlight fared better, but its claustrophobic repetitiveness quickly got to me as well.

CONCLUSION
Kingdoms of Amalur: Reckoning is not all bad, it’s just very bland. For a game that was in development for roughly seven years, the different gameplay systems don’t seem all that well-thought-out. And perhaps the lengthy development also explains why Amalur brings absolutely nothing fresh to the table. It simply lacks its own identity, instead being a Frankenstein’s monster of cobbled-together pieces from several other, more distinct games.

Kingdoms of Amalur: Reckoning was released on February 7, 2012 for the Xbox 360, PlayStation 3, and Windows PC. An Xbox 360 copy was provided by the publisher for the purpose of this review.