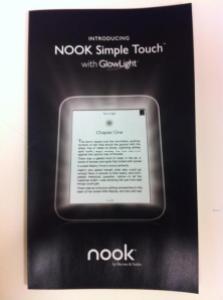 Barnes & Noble could be preparing to launch a new version of its Nook Simple Touch e-reader tablet with a fully lit screen, according to signage allegedly produced by the company.

Earlier today, The Digital Reader posted a photo (pictured right) of a B&N promotional poster that reads “Introducing the Nook Simple Touch with GlowLight.” The current Nook Simple Touch is the company’s low-cost e-ink reader, which doesn’t include additional lighting support for reading in the dark.

If true, the news would indicate that B&N is trying to get a leg up on its main competitor Amazon, which of course produces its own low-cost e-ink reader, the Kindle. The Verge points out that Amazon is planning to launch its own updated Kindle with a lit-screen. But if you’re imaging a few standard tiny lights embedded into the rim of the reader’s screen, then think again. The technology for both devices are said to have a thin layer that covers the entire screen and evenly distributes light across it.

While most of the attention usually goes to devices like the iPad, Nook Tablet, and Kindle Fire, a low-cost e-ink reader with a lit-screen could have a significant impact on converting people to digital books rather than dead-tree editions.

Photo via The Digital Reader