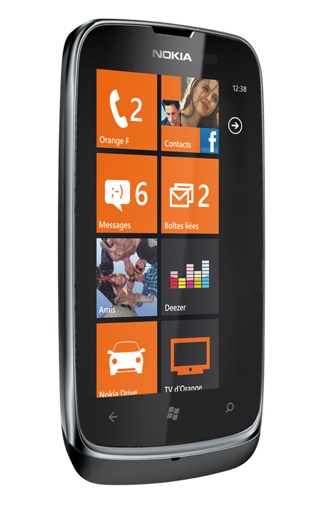 Today wasn’t the best day for Nokia to announce a new device, given the company’s lowered Q1 expectations, but maybe the new Lumia 610 will help distract press from the company’s dire financial situation.

After being rumored for some time, Nokia officially announced the Lumia 610 — the first Windows Phone to include support for near-field communications (NFC) — at the WIMA NFC event in Monaco. The phone will launch on the UK carrier Orange in the third quarter, and it will include support for NFC mobile payments from Visa and MasterCard.

Nokia says it added an NFC software stack on top of the Windows Phone OS to enable the functionality, as Microsoft’s platform doesn’t support NFC natively yet (that’ll come in the Apollo update later this year). The technology will let you make mobile payments and interact with devices, such as Nokia’s NFC Bluetooth headset, simply by tapping the phone. The Lumia 610 is Nokia’s 8th NFC-enabled phone within the past two years.

The phone isn’t a direct competitor to the Lumia 800 and 900 models, as it sports just a mere 256 megabytes of RAM and likely a slow processor. Instead, Nokia says it’s targeting a “younger, broader audience” with the Lumia 610. I suspect by next year, we’ll see NFC in all of Nokia’s flagship devices.

Nokia’s Andrea Bacioccola dives into the tech behind the phone in the video below: