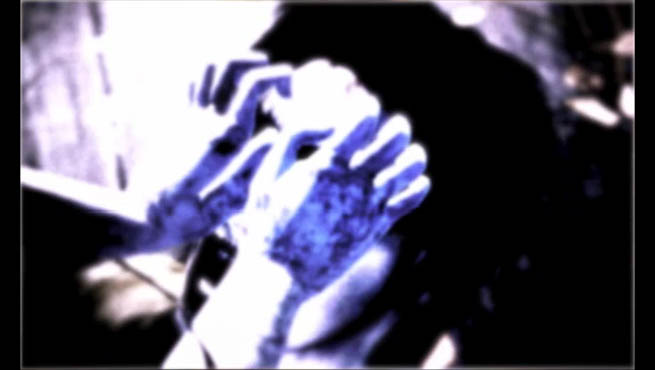 Spirit Camera: The Cursed Memoir is one of those games where the “Genre:” tag should read “Design Experiment.” It feels like the first question the creative team asked was, “How can we try out this new technology?” as opposed to “What is the story we want to tell?” or “What kind of experience do we want to create for the player?”

Some of the technology is pretty clever, mind you. Spirit Camera does some nifty stuff with this new “augmented reality” notion, using the Nintendo 3DS camera and gyro sensor to lay images from its invented world over the background of the real world. There are times where it closes in on a new threshold of spookiness — between the stereoscopic screen and the AR overlays, it almost feels like bits of the game are really there.

One of these days, something great may get made using pieces of this foundation. Spirit Camera isn’t quite there yet.

Augmented unreality
Spirit Camera spins off of the Fatal Frame horror series, but it’s not quite the same kind of game. Those were full-blown 3D adventures from the Silent Hill mold, whereas this is more like a piece of interactive short fiction. 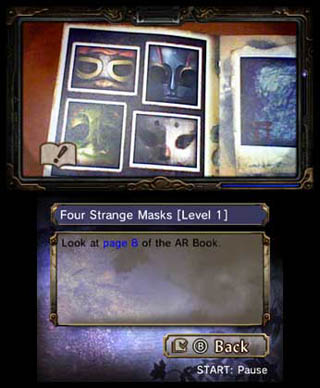 The “memoir” from the title is a book of seemingly random images that comes packed in with the 3DS cart. In the context of the story, it’s a mysterious diary with a link to a ghostly curse — the images are windows into a haunted mansion where something fairly dreadful is happening and may soon happen to the player as well. Focusing on the pictures with the 3DS camera causes different pieces of the story to unfold, complete with animations, sound effects, narration, and little puzzles involving different ways of messing with the camera and the book.

It also causes the main character of the story, Maya, to emerge from the book and thereafter stand right next to you — when you look at the real world through the 3DS screen, anyway. Maybe this sounds a little cheesy, but it’s a genuinely surprising effect when she materializes for the first time.

3DS collectors might be put in mind of a title from last year, Majesco’s The Hidden. That was more cartoonish, though…more of an action game. Spirit Camera is content to do less in the interactivity department, and that helps keep the narrative together, even if it hurts the game as far as replay value is concerned.

Slick production values
The voice acting and artwork hold up their end of the project, too. Nintendo’s English adaptation never breaks the mood, which is always a tricky proposition in a horror game. Maya’s voice actress is especially effective — she has the vast majority of the lines and has to support the arc of her character’s gradual coming-around to a crucial secret.

The visuals do much more with layers of imagery and graphical filters than they do with raw polygon-pushing or anything like that. In fact, there aren’t many complex 3D constructions in the game at all — just Maya and a couple of other key characters. It’s not so much what you see in Spirit Camera as how the game decides to show it to you. Things peek out of corners or through layers of obscuring fog. Even when it’s laid over some completely random real-world background, the imagery is good and creepy like it ought to be. 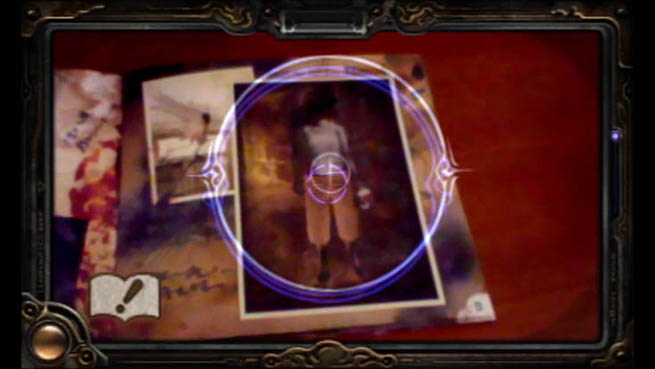 Tetchy camera combat
Battling the evil spirits that emerge from the book works a lot like the console Fatal Frame games. From a first-person view, center the camera crosshairs on a target, hit the shutter, and watch the exorcism work. The difference here is that the camera is…well, the camera. Through it, the game lays ghosts over the view, and blasting them is a matter of moving the system around until the gyro sensor decides that the lens is lined up with the target.

This is a decent combat system, and it would be an even better one if it reliably worked. Sometimes, the game has trouble deciding whether every element of the picture is lined up correctly — the camera crosshairs, the enemy, and the AR book in the background. In certain encounters, they have to all be arranged in some arbitrary fashion that isn’t ever clearly explained. Figuring out exactly how to hold the 3DS and the AR book is a matter of trial and error, spinning them around in different orientations until system decides that yes, it’s possible to trigger the fight now. 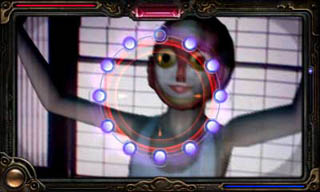 Late in the story, when the battles are longer and more complicated, using the camera as a weapon gets tiring. Literally, physically tiring, because the ghosts move all around you, which calls for 360-degree rotations in response. The final battle is best played standing up in a space with a lot of elbow room or perhaps in a well-greased swivel chair. Even then it takes some effort to turn around and catch up with a moving target.

Finding somewhere to be scared
Compared to most portable games, Spirit Camera is limited as far as the kinds of places you can play it. For the AR book to photograph properly, it needs a lot of direct, bright light landing on the images, and the player has to be able to lay it flat and take a long, steady look at it. Getting the gyro sensor features to work right is perhaps even more difficult — that calls for standing up and turning around and looking up and down. These issues handicap the game in other ways, too.

Bright light is a problem for a horror game. Bright light is fundamentally un-scary. Any sensible gamer knows that the way to play things like Fatal Frame or Silent Hill is late at night with the lights out. Fiddling the camera around so it frames the AR book just right isn’t very scary either. Those sorts of delays knock a hole in the mood and pacing of the story.

Meanwhile (though this runs somewhat at cross-purposes to the last point), the looking-around features are a handicap for a portable game, because a portable game should ideally be something you can play in any place, at any time. You can’t play Spirit Camera on the train or the bus, unless you don’t mind your fellow passengers looking up and staring at the crazy person turning pirouettes in the aisle. If you’re seatbelted into a car, forget it.

Sweet, but short
The ultimate knock against Spirit Camera is that it just doesn’t have very much content. It’s well-produced while it lasts, but it doesn’t last long. An average gamer should be able to knock off the story mode in a couple of sittings, and the harder “extra” version of the main story doesn’t add a great deal to the experience.

That leaves only a few minigames to flesh out the package, things like a memory-matching challenge and a spirit photo mode that lays ghostly images over pictures taken with the 3DS camera. Cute? Sure. Fun? Sure. Enough to make this whole thing worth 40 dollars? That’s a tougher proposition.

For about half the standard asking price, Spirit Camera would be worth picking up. This is a fine spooky story — not as spooky as it would be in the dark but still spooky — and it’s a cool showpiece for some new concepts in gaming technology and design. One of these days we may look back on games like Spirit Camera as the beginning of an important new trend.

At the moment, most players are going to want to give it a pass. Serious Fatal Frame fans and aspiring game designers who want to take it apart and see how it ticks can shell out the full price. The rest of us can wait around for a better deal in thrills to the dollar.

Spirit Camera: The Cursed Memoir will be released on April 13, 2012 for the Nintendo 3DS. A copy of the game was provided by the publisher for the purpose of this review.