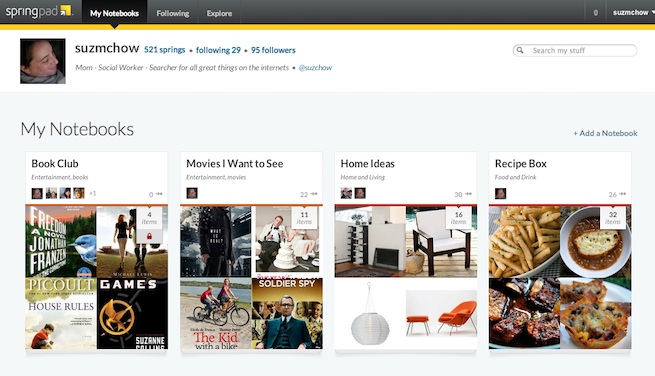 Wednesday, Springpad launched the latest version of its digital notebook service, which includes a web, iOS, and Android app that help you save snippets of information from the Internet. The new version is a major overhaul of the service and includes some Pinterest-inspired design elements.

We all tend to save a lot of digital information these days; it’s one of the reasons Pinterest has become so popular. But before Pinterest’s time, Evernote and Springpad were competing to be the best digital notebook to save snapshots of webpages, notes, to-do lists, and anything else you want to remember later. Springpad has become outdated in recent years, with an almost cartoony-like interface. Evernote on the other hand, has established itself among more seriously users who love its offline support and straightforward, powerful interface.

“Our focus is to creative the best version of the digital notebook possible,” said Springpad chief executive Jeff Chow in an interview with VentureBeat.

Trying to solidify its place between Evernote and Pinterest, Springpad’s latest release takes some features from both, plus some collaborative features from Google Docs. The result is an app that looks like the offspring of all three popular services.

Perhaps the most striking difference between the Spring 3.0 and its older versions is how it looks. The first versions of Springpad were cute, but looked dated compared to Pinterest’s clean lines. The company appears to have taken cues from the digital pinboard for its latest look. Everything from the notebook backgrounds, to the way photos are displayed feels more grown up.

The comparison to Pinterest becomes apparent when you look at a notebook in the gallery view. Photos, if included in a note, are displayed prominently as tiles. However, unlike Pinterest, each image must be large enough to fit the space or the quality is compromised, which can make some notebooks look a bit ugly.

Like its predecessors, Springpad 3.0 still lets you save everything you could ever want to remember, including movies, wine, books, and recipes. Unlike previous versions, the new app plays up the ability to search for something to add to a notebook.

There are two major ways to save information to Springpad: the clipper bookmarklet and the search bar. In the past, the search bar worked about 70 percent of the time, crawling the Internet for the product, book, or movie you were looking for. But it often struggled to find the right match.

It’s this exact feature that Springpad revamped in its latest version. The new “smartbar” uses semantic search to find a product or place that you can add to a notebook. The semantic search allows you to start typing a few words and Springpad will start to guess what you are looking for. In addition, you can start typing a note in the smart bar, and Springpad will give you options to set an alarm, create a note, or make a reminder.

While trying out the smartbar, I found it still struggled to find some local businesses and certain products, but it seems to be improving with time.

Springpad has also added more features to make the information you save more valuable. If you save — or “spring” as Springpad calls it — a product, the app will grab the product’s url and price. If you spring a restaurant, Foursquare, Yelp, and OpenTable information will be included in the note, as well as a map, phone number, and business hours.

This new version weighs heavily on collaboration. Underneath each note you save is a comment section and log of the changes made, similar to features found in Google Docs. This is meant to encourage shared notebooks, where multiple people can curate the content and work collaboratively. Notebooks can be kept private, restricted to invited people, or be made public.

“We’ve found we are going after a new audience type, people who love to share their knowledge. We’re creating micro-communities,” said Chow.

Much like you can follow a Pinterest board, users can follow each other’s notebooks and stay updated with the latest great recipes or movies. Springpad found that people who consider themselves the best recipe finder or their family’s go-to person for book recommendations wanted a place to collect their knowledge and share it with others. The company responded and created “Explore” and “Following” tabs, where you can find other people’s public boards and follow the stuff they clip.

Current Springpad users will have their accounts updated with the new look starting early Wednesday morning. Springpad’s iOS and Android apps will also be updated to reflect the changes.

The new look and features of Springpad 3.0 are definitely an improvement over previous versions. The company has seemingly found a niche between Pinterest and Evernote, where people can find exactly what they are looking for and save it in a visually pleasing way.