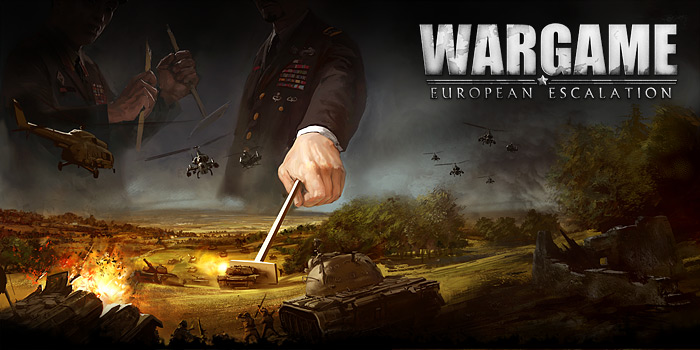 That may be true, but gaming sure does, especially in the world of RTS games. Over the years, this genre has started to split into multiple sub-genres, from the normal old-school base building RTS games, including the likes of Starcraft, Company of Heroes and the Command and Conquer series, to the newer more action orientated RTS games, including the likes of World in Conflict, and now Eugen Systems (developers of R.U.S.E) latest release, Wargame: European Escalation. 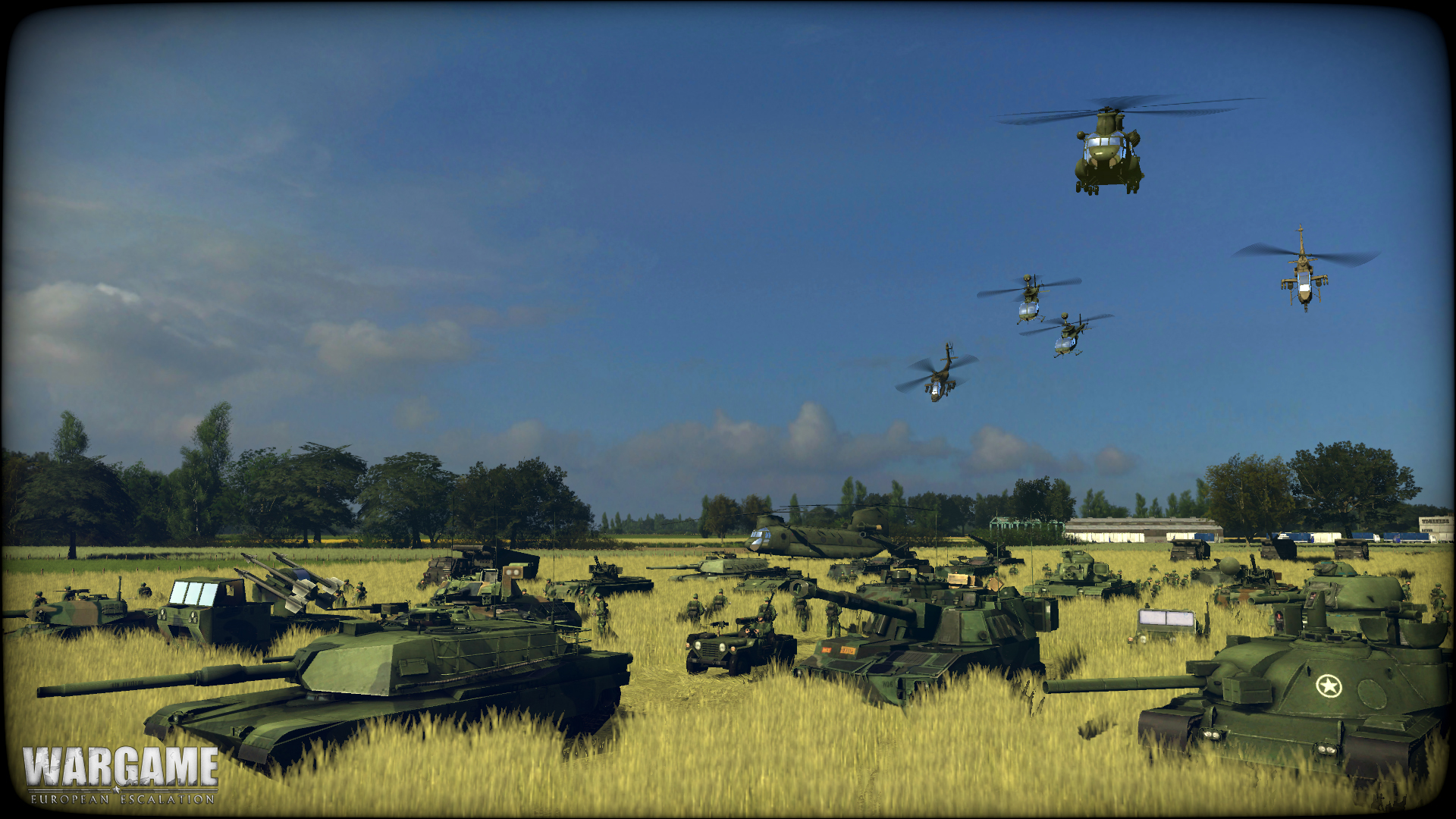 “Are you ready to rumble?”

Wargame: European Escalation puts you directly in the shoes (or combat boots) of a commander of either NATO or Warsaw Pact forces, lead by the United States and the USSR respectively, during a fictional escalation of the Cold War taking place in the 1970s to early 1980s.The fighting in the game focuses on land engagements in Europe, with most of the maps, being some variation of "Northern European summer countryside", but this by no means a bad thing, as these maps fit the gameplay, and still contain just enough variation to keep them interesting. While both the Air Force and the Navy are absent from the battlefield in this game, this does not take anything away from the massive battles on screen as the massive amount of different units (361 per side) include everything you could ever want when taking on an enemy battalion. The units all fall into one of several categories, including Tank, Helicopters, Recon, Support, Logistics and Vehicles. This may seem overwhelming, but each type of unit has a very specific role on the battlefield, so it easily falls into place. Each unit has also been maliciously modeled with great attention to detail, as well as different armor values for different parts of the vehicles. 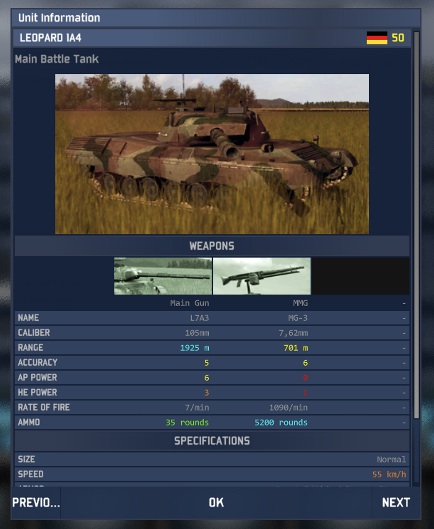 “Unit card for the Leopard 1A4, one of the early NATO tanks”

The main addition to Wargame: European Escalation that sets it out from the rest of the games in the RTS market is it's "Deck" system. Much like any trading card game, you have to start out by creating your deck. This deck can consist of up to 25 different units, of any type and combination. 25 different units may not sound like much, but every variation of a unit still counts as just the one (for example M1 Abrams, M1IP and M1A1 all count as a single unit). On top of this, one can create several decks for each faction, to accomodate a variety of play styles and match types (1v1 – 4v4). Units are unlocked through command stars, that can both be unlocked through the campaign, by completing missions and secondary objectives, but also through multiplayer, where one will gain several command stars each time one gains a level. These levels are gain through EXP, which in turn is gained by both wins and losses, so this means that the good players and early adopters do not have a monopoly on the good units. Due to this, the unlocks do not really effect the games balance, as you usually only need to level up a few times before you have enough stars to create a deck that is on par with anything the enemies can throw at you. Although, if you are the type who doesn't like to pick a where you are the underdog, no matter how slight, the option is always there to cut your teeth against bots first, with multiple difficulty settings, or play some of the well balanced, if a little challenging campaign to earn the command stars to get the unlocks you want, before taking on the rest of the world.

Moving on to the actual gameplay, one will find that it is actually very simple, and can possibly be compared to World In Conflict, if you increased the scale, slowed down the pace, reduced the frustration and removed "Off map support assets". It very much features the same concept, of deploying your units at the start of the match and then receiving command points from controlling various points across the map, which can be used to call in reinforcements. This is differentiated by there being two different types of control points, "control points" which grant you a certain amount of command points every few seconds, and "reinforcement points" which provide you with a point to bring units onto the field. Though out the battle, you gain points (score) by destroying enemy units. The amount of points is depends on the cost of said unit, so destroying 1 expensive unit is worth more that destroying 3 cheap ones. On top of this, there are only two different victory conditions in the game, point limit and a time limit. This main sound like a very limiting factor, but due to the nature of the game, it works perfectly. At the moment there are three ways of playing the game, “Campaign”, “Skirmish”, and “Multiplayer”. There are four different campaigns, two for each faction, each lasting around 4-5 missions. The story is your basic “Cold War gone hot” scenario without many twists, but what makes it interesting is the level of challenge the AI offers, as well as the persistent aspect. As you progress through the missions of a campaign, you can unlock more units to deploy, but be warned, any units you lose will be lost for the remainder of that campaign, meaning a costly victory in one of the early missions can mean that it can be almost impossible to beat the later ones. This forces you to play things safe, and thing about your decisions. The skirmish mode is the weakest link in the package at the moment with only one on one play for the time being (Co-op, “Comp-Stomp” is being added in a patch). The AI has 3 difficulties in skirmish, but there is little reason to play it, as you are not awarded command stars for you efforts. Multiplayer is the real meat of the experience, with an active and relatively nice community, with thousands of games being played a day at the time of writing this. Multiplayer allows you to play anything from 1v1 to 4v4, and even allows you to unbalance the teams (for example 1v4), to give skilled players a unique challenge. 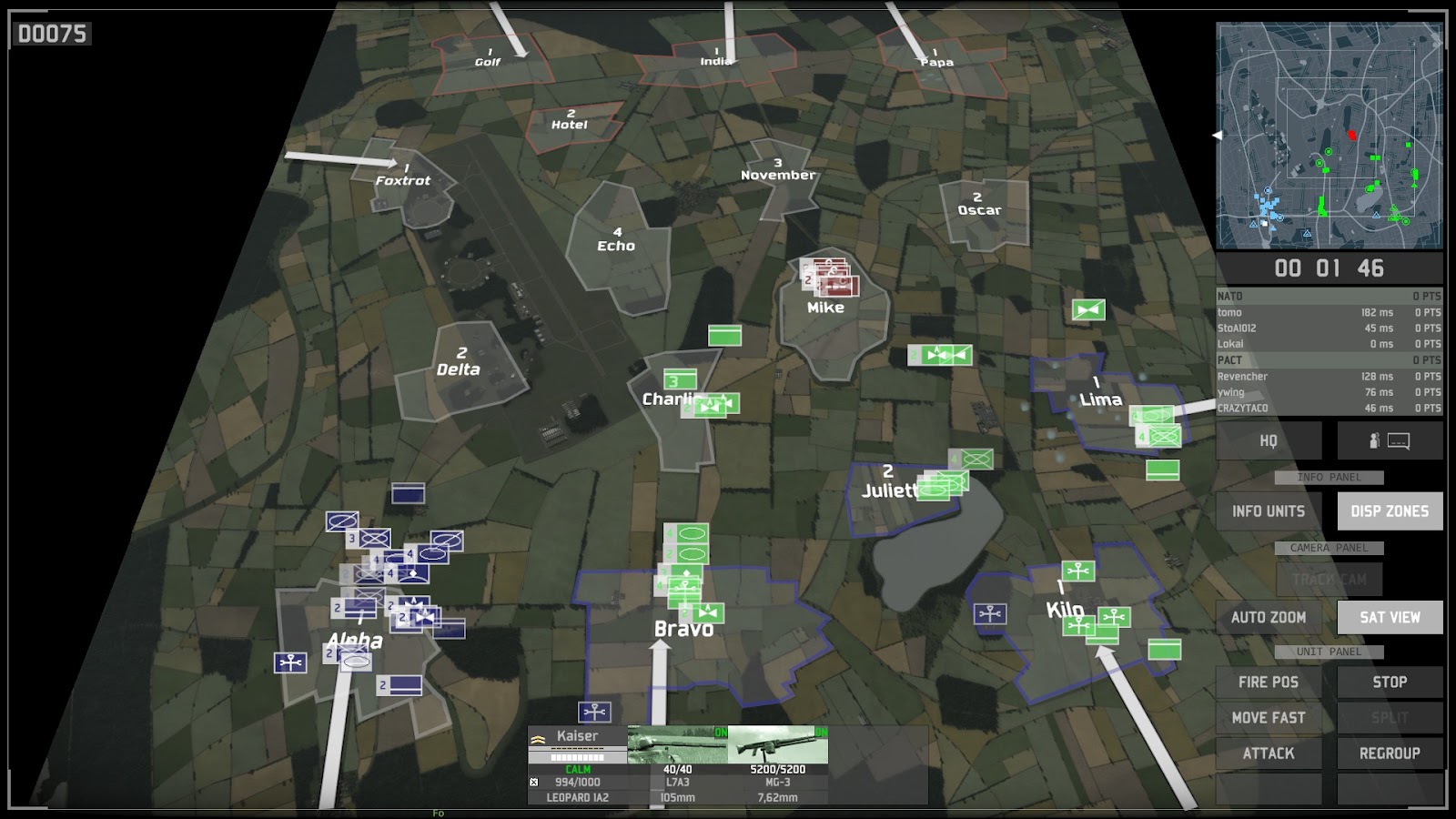 "Control Points in the middle of the map, and Reinforcement Points with the arrows."

The actual gameplay also works very well with the setting and the game, as this game is more about your choice of units and tactics than your APM. This is in part due to the massive scale of the battles, but also due to the fact that you do not have that much control over your units. For example, when moving tanks, you cannot decide which direction the face, like in many other RTS games, but thankfully the AI is generally smart and will turn to face any threats, as well as turn to face the most logical direction, most of the time. “Most of the time” being the key word in the previous sentence, as the AI sometimes decides that a single unarmed transport is a bigger threat than 12 Soviet T-80 tanks barreling towards them. As one progresses through a battle, logistics will start to play a larger part in the overall engagement, as it is required to rearm and refuel unit regularly, if you want them to operate to their full potential. This is done through the use of FOB, which are placed at the start of the game, for a point cost, and supply vehicles which can be called in, just like fighting units. This extra mechanic really adds a new layer of depth to the gameplay, by forcing you to keep your supply lines secure, if you don’t want your offensive to grind to a halt. The main problem with this system comes when you play with an evenly skilled player, with balanced units, as this sometimes causes the game to turn into a textbook war of attrition, leaving you praying that his FOB will run dry before yours.

The presentation of the game is truly stunning, for the massive scale, with units being modeled in great detail, with explosions and gunfire instantly drawing your attention to where the action is. The extremely streamlined HUD and lack of loud, out of place music really increases the immersion, and after a few hours, you’ll find yourself believing that you really are a General. While the graphics are great, you will rarely see the details, as you are mostly going to play with the camera zoomed out, so that you can get a full overview of the battles. This sometimes results in a few rendering issues on some machines, but Eugen is working to patch this as soon as possible.

After playing this game for over 75 hours, since it’s release, I only have two issues with this game, they can be classed as minor or major, depending on how you look at it and what type of person you are. The first being the fact that this game comes with added DRM, on top of Steam, which limits the game to five installs, while this is not a problem for me and the DRM has not bothered me the slightest, I know some people may have problems with this, especially seeing as it is based on the notoriously poor “Starforce” DRM. The second thing that bugs me with this game is the way that unit grouping works, if you tell multiple different units to move to one location, they will not do so at the same speed. Faster units will leave slower ones behind, which can result in a lose, if you are not completely focused, as it may lead to AA vehicles being left behind causing tanks to die, or worse, all you logistics vehicles storming ahead only to be captured or destroyed by the enemy, leaving an entire army stranded halfway to their destination with no fuel, just waiting to be destroyed.

Though it causes a few problems here and there, the main strength of the gameplay remains it’s huge scale, which hundreds of units fighting for control of a gigantic map, stretching over multiple square kilometers. This combined with its vast amount of units and streamlined interface and gameplay really make this a game for anyone looking for a new tactical RTS to sink their teeth into. While it offers nothing groundbreaking or genre defining, it does what it does, and it does it well, and I can wholeheartedly recommended it.