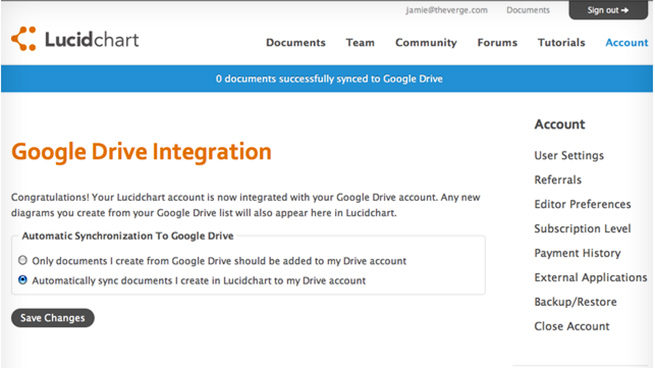 We first heard that Google would shortly launch a cloud storage service similar to Dropbox, Box, Microsoft’s SkyDrive, and Amazon CloudDrive in early February. At first we thought Drive’s offerings will most closely mirror Dropbox, which gives users access to cloud-connected storage on smartphones, tablets, Macs, and PCs. But now it also appears to add in a sprinkle of Box, which has a priority to integrate with many other third-party services.

Lucidtree accidentally posted the above page showing Google Drive integration yesterday, but it quickly got rid of the screen. Notably, Lucidtree CEO Karl Sun worked in a variety of senior roles at Google before he left for Lucidtree, so it’s likely his company was approached by Google pre-launch to add Drive access. We expect Google is approaching lots of third-party services so it can have a whole host of partners when it launches.

GigaOM said that Google Drive might finally arrive the first week of April. That prediction didn’t turn out correct, but now with this leak, Drive’s launch could easily come next week.