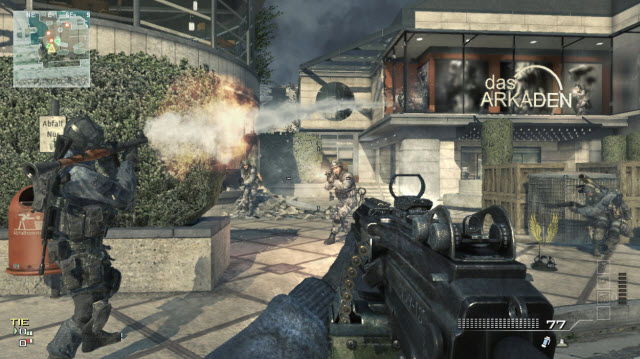 It took me 154 days, but I finally reached Prestige, the highest level in Call of Duty: Modern Warfare 3 multiplayer. I’m very proud of this achievement, although I have to admit that I lost my way to the top.

You see, even though I’ve invested days of my life in Modern Warfare 3 multiplayer, my rank is a lowly 5,573,021 — although that’s still pretty good considering that maybe 25 million or more have bought the game since its debut on Nov. 8. I figure I’ve got a better record than four out of five players. But the stats also mean that millions of players have invested more time than I did to make it to level 80 — the rank of Commander. Now I can start the whole cycle of leveling up again in Prestige mode.

The numbers above show that engagement of Call of Duty players are through the roof, and that tells you why it’s so hard to knock Call of Duty titles out of the position of best-selling video game of all time. Call of Duty Black Ops from last year and this year’s Modern Warfare 3 have generated more than $2 billion in sales in the last two years. Sales are one thing, but the time spent playing the product is another.

One of the attractions of Call of Duty multiplayer is that it’s a very instrumented experience. When I say I lost my way to the top, I know that because the game’s metrics tell me just how terrible I am, one bullet at a time. I can measure the impact of using different weapons or grenades. I can pinpoint the play pattern that best suits my skills.

The metrics tell me I was on the winning team 137 times and lost 195 times. My accuracy rate for shooting was 8.29 percent (yes, they count every bullet). I had 2,356 kills, 677 assists, and 5,580 deaths. My kill-death ratio, therefore, was 0.422. In terms of number of kills, I ranked 6,164,044 of all players. That rank is actually higher than my overall multiplayer rank because I like to play a version of the game called Domination, where you have to capture and defend three flags on a map. Since I can get points for grabbing flags, that improves my overall ranking on multiplayer.

These stats are telling in a few ways. If 5.5 million players have put more time into this game (or have just played better) than I have, those players alone have collectively put more than 245 million hours into it over the past six months. That means multiplayer has significantly extended the amount of time that players are putting into this game. And that means Activision Blizzard is capturing a significant slice of the available game time for millions upon millions of hardcore gamers.

I might have played four other single-player campaign games all the way through, had I not been tied up with Call of Duty multiplayer. The pattern among other gamers is similar, and that’s why you see some games scoring huge on the charts while many other medium-ranked games fall flat. Nobody has time to play mediocre games anymore, because the big hits suck in all of our time. Even now, six months after the game launched, I can log in at midnight on a weekday and find 150,000 other players online. This is why it makes sense for Activision Blizzard to put four or five studios to work on Call of Duty at any given time.

If you look at Zynga’s games on Facebook, where players log in for maybe 10 minutes at a time, the engagement level — the amount of time players spend with a game — doesn’t seem like it’s anywhere near the level in Call of Duty games. As I noted last year, the comparative numbers show that, while casual social games are heavily instrumented and extremely popular, they have a long way to go before they can match the enthusiasm that users have for hardcore online games.

At the same time, things are different from a year ago. League of Legends, the multiplayer online battle arena game from Riot Games, has tens of millions of users who are highly engaged in short online battles. That’s why Tencent bought a majority stake in Riot Games for nearly $400 million. This game and others like it are played year-round.

In recognition of that trend, Activision Blizzard has changed its own game to adapt. It has launched Call of Duty Elite, a hardcore social network for Call of Duty fans. With it, I can get a lot more engaged than I already am. So far, I’ve spent most of my time playing the game and little on the Elite network. But it has some intriguing options for improvement, so I won’t always have to play with a big “L” on my forehead. I can view videos of each map and the best way to fight on it, either as a sniper or a short-range fighter. It has heat maps that show all the deaths on the map in red, based on where players were shot. That tells me where the hot spots on the map are and how to position myself for maximum survival and ambush opportunities.

Elite has a free version and a paid version for $49.99 a year that gives you access to all of the monthly “content drops,” or new maps and other downloadable content (DLC) that is arriving much more frequently than the map packs of the past. In short, Elite is a way for enthusiastic players to sink a lot more time into the game and the Call of Duty culture than they have in the past. And if it can help me feel like I’m a winner, not a loser, then I’ll probably stick around and play the game even more.

Call of Duty, now in its eighth iteration, has held my attention because it’s a lot like a Las Vegas slot machine, where the key is to keep you playing. It’s a fast-action combat game in which split-second timing matters. Typical multiplayer matches last about 10 minutes, which is great for when you only have a short amount of time available. The mature-rated game is very violent and bloody, but it isn’t exactly realistic in the way it plays and looks. Players can move much faster than they can in real life. The combat is fierce, but not excessively bloody. I can take off and play another game, and then come back to Call of Duty during a lull in the new release schedule, like right now.

At the end of the multiplayer round, you can see how many Call of Duty points and experience points you’ve earned. The experience points allow you to level up. In the early levels, it takes only a few thousand points to move up. But later in the game, it could take 47,000 or more to reach the next level. The top experience level is 80, but once you hit that, you can start over and get up to level 90 again, earning what is called Prestige levels.

But getting back to me as a loser: My kill-to-death ratio with last year’s Black Ops was 0.69. That was partly due to the fact that it was a lot easier for unskilled players to kill veteran players with the remote-controlled RC-XD car bomb. That reward equalized a lot of the combat, but there is no such salve in Modern Warfare 3. My accuracy was better a year ago, at 16 percent. That’s due in part because I’ve been using a less-accurate weapon this year, a submachine gun, to try to get the drop on rivals faster. This year, I’ve enjoyed playing Domination on the short-range maps such as Piazza, Dome, and Hardhat.

Even so, I’ve been able to make more contributions to my team effort in Modern Warfare 3. That’s because Activision’s developers — Infinity Ward, Sledgehammer Studios, Raven Software, and others — changed the way weaker players participate in the combat effort. In the past, players could earn “killstreaks,” a reward that let you earn a significant weapon for a short time, such as an RC-XD car or an attack helicopter. To earn those rewards, you had to rack up a lot of kills in a row.

Raptr, the social network for gamers, has collected some interesting data on the usage of Black Ops versus Modern Warfare 3. In the opening months, Black Ops had 19 percent more play time per player at 49 hours versus 41 hours for Modern Warfare 3, according to Raptr. But as of this date, Modern Warfare 3 is performing better than Black Ops. Fewer people are player Black Ops, naturally, as that is an older game.

“Overall, every Call of Duty game appears to do a remarkable job of keeping gamers engaged for well over a year, something you don’t seem is many other annually updated gaming series,” said John Lee, vice president of marketing for Raptr. “Even when Black Ops and Modern Warfare 3 are two different storylines, gamers are still playing each Call of Duty game with the same sort of persistent dedication year in and out. The Call of Duty formula of annual updates, alternating between two different stories/dev teams, robust multiplayer support, and a steady infusion of DLC doesn’t appear to result in brand fatigue just yet. Both games are holding rock steady when it comes to playtime behavior. ”

This year, the developers made the game play more accessible. You earn “pointstreaks” to get the new weapon rewards even if you’re playing in a support role. If you use the “support” strike package rather than “assault,” you can keep racking up points toward weapon rewards even if you die a lot in between kills. I was able to get the Stealth Bomber award 15 times in my support role, which means I was able to help my teammates and rain bombs on the map, even if I didn’t get a lot of kills in a row. This is a significant design change that makes the game more appealing to less-skilled players. And it’s the kind of thing that Activision Blizzard has to do to keep interest high in the world’s biggest video game. If you’re competing with this game, take note on how to do it right.