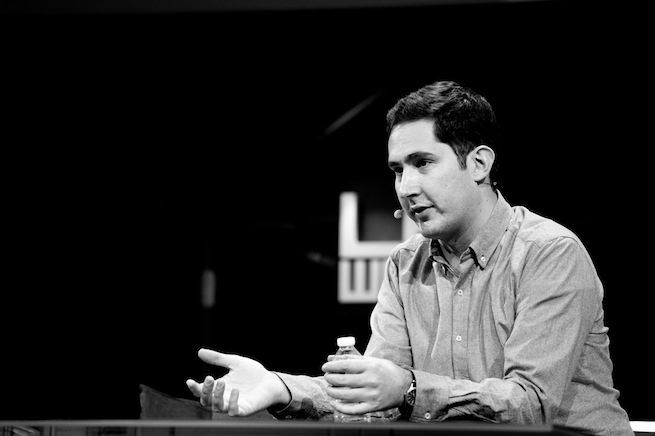 Instagram co-founder Kevin Systrom knew all the right people in Silicon Valley to get take his startup from idea to $1 billion Facebook buyout. But it seems Systrom had connections to the social network throughout his career.

The New York Times released a background of Systrom’s career today, which opened on a scene the Instagram co-founder laid out for a group of Stanford students in May 2011 (see the speech here). He retold the night he and co-founder Mike Krieger launched the photo-sharing application, which is where his company had its first connection to Facebook.

It happened in the early hours of the morning in October 2010. The two were working off of a small server in Los Angeles, and had no clue that thousands of people would suddenly download and knock the application offline.

“There’s no motivation like having people knock at your door saying, “I want to use your product, like, fix your thing,'” said Krieger in the Stanford talk.

Panicking, Systrom looked through his phone and found former Facebook chief technology officer Adam D’Angelo in his contacts. He and D’Angelo had met at a Sigma Nu party at Stanford seven years prior, and despite the time passed D’Angelo was happy to help. He walked the small Instagram through its first technological hiccup, in what Systrom said was a half-hour long conversation.

Before this night ever took place, Systrom had already experienced a Facebook acquisition. After a post-Stanford stint at Google, Systrom moved on to an internship at Nextstop, a travel company that helped people find things to do around the world through social recommendations. Systrom joined in 2009, the company was then purchased by the social network giant in July 2010.

But Systrom had also interned with Facebook’s competitor Twitter. Jack Dorsey was one of Instagram’s early marketing mechanisms, according to the Times report, getting early access to the app and sharing photos through it on Twitter. Dorsey even went so far as to invest in the photo-sharing app. But since the acquisition announcement, Dorsey has not used Instagram on his Twitter, which may be a sign the Twitter founder is upset by the news.

“It’s the people sitting next you,” Systrom said of his relationships in Silicon Valley to the crowd at Stanford, “[It’s] the people you meet before the event, after the event… chatting with them about the stuff you are doing that end up being the most valuable part of your entrepreneurship experience.”

via The New York Times; Photo via LeWEB11/Flickr