Updated at 4:37 p.m. PT with more information from Albeluhn.

When people become unemployed, they often fall prey to feelings of helplessness. Not Christopher Albeluhn, an unemployed game designer who recently created an incredibly cool app that allows you to explore the solar system and constellations in 3D.

“The Solar System: Explore Your Backyard” was spotlighted on Reddit by his roommate and the project’s first demo video now has more than 70,000 views. It deserves the attention of the tech community because it shows what a single game designer can accomplish if he or she puts his or her mind to it.

Albeluhn explains his story on his Indiegogo page, which is taking donations to help him finish the app:

I have been in the video game industry for just over 7 years, and have worked on some great games with some amazing people, but life always throws the odd curve ball and i found myself unemployed. I needed to update my portfolio, so i began to create planet Earth in a video game engine as a simple test for a shader idea. It started out small, but quickly grew into a fully functioning solar system. I decided early on; If it were ever completed, that i would share it with the public. Every night i began making it bigger, better, and more of what I wanted to see in a space program.

Before i knew it, i had all 8 planets (I am SO sorry Pluto), the sun and the Asteroid belt. They all had correct rotations, orbits, locations and speeds; their moons, information regarding the planets and their facts. All of these were fine, but i wanted something more, so i added in the constellations, all 88 of them.

Albeluhn told us that he intends to add much more to the application, including “dwarf planets, satellites, more detailed models, NASA satellite paths, and a viewing library.” After the PC version of the app is done, he then plans to port it over to iOS and Android. However, he isn’t sure about how long that will take.

As for releasing the app for the PC, Albeluhn said the app is “near completion” but he needs to find a way to distribute the game. He has sent a demo build of the game to Steam to see if the company would be interested in featuring it in the “Simulation” section. Another factor for releasing the game will be how much money is able to raise on Indiegogo. He writes:

The $8,000 is a goal, but not set in stone. Everything received through Indiegogo will be going straight towards the project, this isn’t only for the PC build though. Once everything is cleared by Epic, the project is complete and a distributor is found; I will be putting all remaining money into converting this to a format supported by the iPad and possibly iPhone. This will require more coding, and a lot of time. If the $8,000 isn’t reached, then less money will be available for porting it to iOS.

The app will compete with other solar system explorers like Brian Cox’s Wonders of the Universe and Eyes on the Solar System, but we hope Albeluhn’s project takes off for his stunning execution and dedication to his work.

Check out a few more screens below: 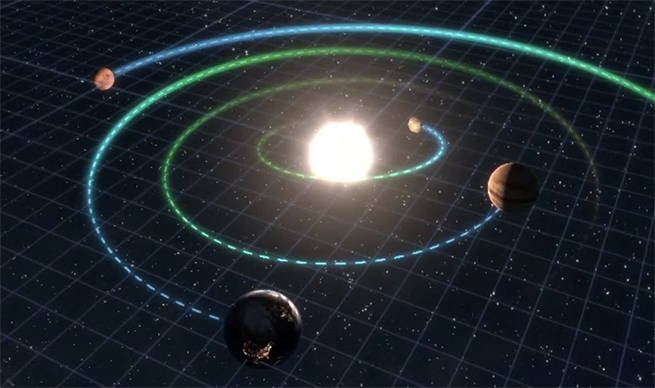