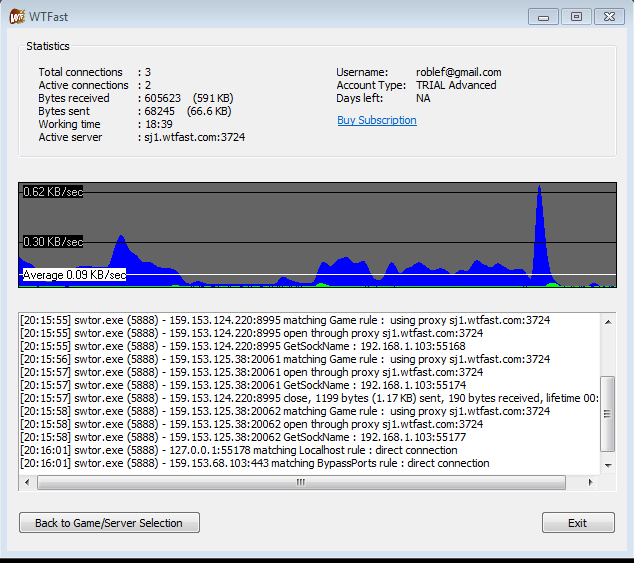 WTF indeed. The WTFast service is a proprietary technology being sold (for $6 and $10 a month) as an accelerator of the connection between clients and servers which potentially increases the responsiveness of online games. Their press email promises: “Lag and slow online connections are a thing of the past for FPS games on PC.” I was skeptical, so I went in search of more data.

I soon discovered that I could not find much more information on this service.

The website makes tons of promises, but even the main testimonial is less than gushing at best. A freelancer here with GamesBeat with a ton of experience in the area also assures me that he’s never seen a service like this that wasn’t “BS 100% of the time.” Another GamesBeat writer went further, saying, “Given what I know about the practical application of proxy servers, it’s hard for me to imagine a scenario where using such a service would improve the speed of your connection. It’s not the same as web browsing where they can store a copy of a website in a location that’s closer to you physically. Since it’s an online game, the data still needs to traverse the full path between point A and point B. They would basically have to purchase connectivity that was better and/or more direct (to both the game server and your house) than what the rest of the public Internet uses, and such point-to-point, high-bandwidth connectivity tends to be extremely cost-prohibitive.”

I asked the company for their own take on the service, and I got a fairly in-depth reply from Rob Bartlett, CEO and founder of WTFast. His comments seemed to center on ping, latency, and their proprietary server magic. His response, while thoughtful and in-depth, appeared to dance around actual numbers. “After using WTFast, many users notice their latency get cut in half or more,” he said.

He followed that up with, “One important thing to note is that latency/ping meters really are unintelligent things. They don’t tell you a lot about your connection; really, all they tell you is your “Internet distance” to the game server you are playing on at that moment in time.” I hate to note the contradiction since he seemed sincere, but you can’t have it both ways. Either the latency is useful if cut in half, or it’s not. It also seems to me that the distance to the servers is an important measure of performance. He summed up by saying that I should try WTFast for myself.

I did just that. I ran it with Electronic Arts/BioWare’s hit online experience, Star Wars: The Old Republic (SWTOR) as well as League of Legends (LoL), an online fantasy battling game. I play SWTOR often, so have an idea of how responsive the game has been previously. I’ve never before felt that my connection was laggy, and I really saw no difference when playing through the WTFast servers with either game.

Other services like Smoothping.com, Lowerping.com, and Battleping.com promise similar improvements. I asked Bartlett how WTFast was different. He said that WTFast uses its own proprietary software, has database driven support for over 800 online games (optimizing the connection on per-game basis), and is the only service that has deals with both Internet service providers (ISPs) and game server providers. Nothing in his response really pointed to an actual tech advantage besides the fact that they would “optimize” the connection differently for each game.

What’s the bottom line? Unless you live far away from your game servers and see wild latency fluctuations or really high ping numbers, services like this are probably not useful to you. WTFast does offer a free trial, however, so you can indeed try it for yourself. I just wouldn’t expect too much of a competitive advantage if you already live in an urban area with reliable connectivity.