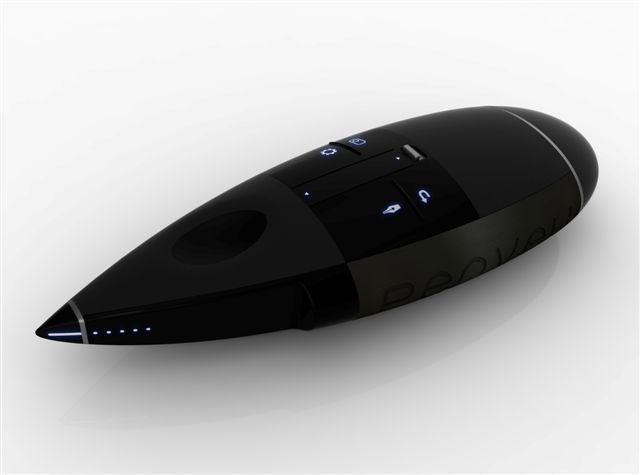 Electronics company Interphase today is launching something that could potentially jolt that tired market. Dubbed Penveu, the handheld device can turn any flat surface into an interactive display — letting organizations use existing projector and large display setups without shelling out for expensive new setups. The company is launching Penveu this week at DEMO Spring 2012 in Santa Clara, Calif., which is co-run by VentureBeat. 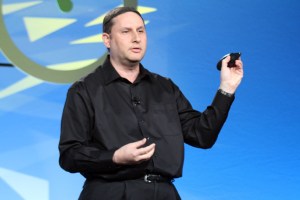 The sleek Penveu device is shaped like a teardrop and was designed by an employee out of the noted design firm Frog. It uses a combination of Embedded Computer Vision (also used in satellite, cruise missile, and smart bomb navigation systems), inertial sensing, and sensor fusion technology to work its magic, the company tells VentureBeat.

The Penveu consists of four buttons, a scroll bar, and a toggle that switches the device between pen and mouse modes. The company boasts that Penvue has incredible accuracy from up to 40 feet away from the screen. It will retail for 66 percent less than current interactive whiteboards.

“The incumbent interactive white board manufacturers have been using the same technology for almost 20 years – they don’t want to see change,” Yoram Solomon, Ph.D, vice president and general manager of Penveu, said in a statement to VentureBeat. “We had no vested interest in the existing technology, but we had all the incentives in the world to bring new technology and disrupt this market with a much better product for a fraction of the cost of existing products in this market.”

For business and education environments, Penveu could be just what many have been waiting for. Projected screens typically offer a fairly hands-off experience, except for the occasional presentation remote or wireless mouse. If Penveu works as advertised, any screen can be brought to life for collaboration, interactive presentations, and much more.

The BBC reported that the Los Angeles Unified School District, the U.S.’s second-largest school district, will be testing out Penveu.

But expert panelists in a discussion following the demonstration questioned the price point and the appeal of the pen beyond the classroom. “It’s a tough category,” Kleiner Perkins Caufield & Byers partner Aileen Lee said.

Interphase says Penveu doesn’t require any driver or software installation and is completely platform agnostic. It can also store screenshots on internal memory (useful for when it’s used as a whiteboard).

Interphase is one of 80 companies chosen by VentureBeat to launch at the DEMO Spring 2012 event taking place this week in Silicon Valley. After we make our selections, the chosen companies pay a fee to present. Our coverage of them remains objective. 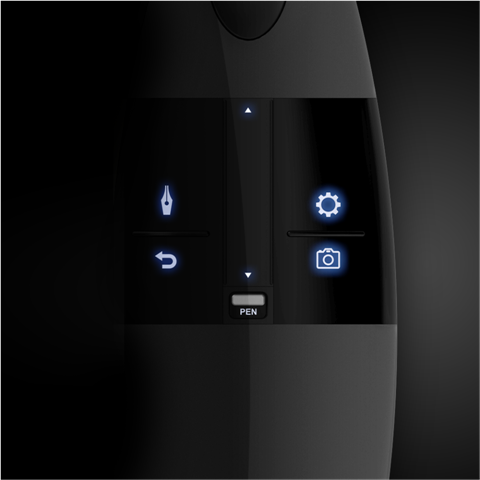