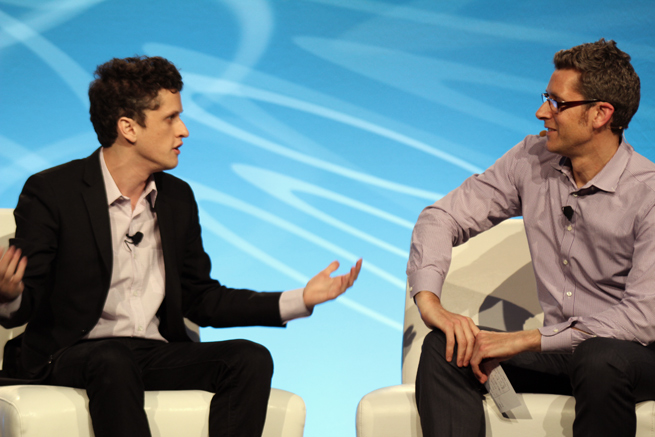 Using humor to cover up his true feelings, Box CEO and co-founder Aaron Levie said that he had nearly forgotten about Google Drive, the search giant’s soon-to-launch cloud storage product that will threaten the very livelihood of Levie’s seven-year-old business.

Levie, in an on-stage interview with VentureBeat Editor-in-Chief Matt Marshall at the DEMO Spring 2012 conference in Santa Clara, Calif., eventually admitted Google Drive will probably be a “cool application” that people will download in droves. “But, I hope [Google] fails,” he said.

“Drive,” as Google’s offering is said to be called, will be a storage solution that goes head-to-head with Box (and others) by providing consumers and professionals with universal access to files and documents. Drive will have a freemium model and integrate with third-party services, we know from previous leaks.

The much-anticipated product could make its appearance any day now, but if Levie’s on-stage demeanor and jovial playfulness is taken at face value, Box isn’t afraid. “[Google’s] job is to get into very big categories,” Levie said, dismissing the competition.

Google will be an “important competitor,” Levie later admitted. But Box, which has been working on cloud storage since 2005, has the focus and knowledge to offer customers a more secure and more scalable solution, he noted. “That’s our entire business,” he’s said.

Levie may not fear the unknown, but Forrester infrastructure analyst Andrew Reichman recently told us that Box and competing startup Dropbox, should be seriously worried about Google Drive.

In the one-on-one interview at DEMO, Levie also talked about how tablets, and the iPad in particular, are disrupting the enterprise, giving startups such as Box the opportunity to compete on equal footing with software veterans such as Microsoft, Oracle, and IBM.