Remember virtual reality tours, those 360-degree panoramic photos you could navigate with your mouse? They were hot for a while, popping up on every real estate agent and hotel site, but the low quality and jerky navigation made them feel antiquated and oh-so Web 1.0. TourWrist began reviving the art form last year by taking it mobile and adding a slick user interface.

Now the company is taking the images further with an update to its iPhone and iPad app, new APIs and SDKs, and neat interactivity features, which the company presented today at the DEMO Spring 2012 conference in Santa Clara, Calif. 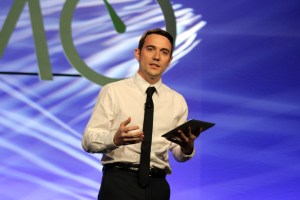 TourWrist gave a sneak peek of two new features due out in May. First are PanoSpots, which link multiple panoramas together Google Street View-style, and give them more depth by linking to photos, videos, brands, audio, websites, and Facebook profiles. The real fun demonstration was of the trippy planar acceleration controls, which will allow you to physically step forward or back while holding up an iOS device to move between panoramas, go through doors, and check out other linked panoramas or information.

Smartphones and tablets have a few key features that are making these types of immersive photos relevant again: GPS, built-in cameras, touch screens, and accelerometers. Using the free iPhone and iPad app, you can view panoramas by categories or location, and navigate by touch or the neat motion-based gryo mode. You can make a panorama of your own surroundings by just moving the device around and capturing the scene with its back-facing camera. The new app update (v2.3.2) adds image preview, editing, and offline shooting options, as well as improved stitching, shooting support for the new iPad, and Retina display support.

TourWrist has a fun social and crowdsourcing side — any one can easily make and share an image, meaning you don’t have to cruise the map of panos long to find some random shirtless dude playing guitar in his apartment. But as you might expect, the nicest-looking tours aren’t shot with iPads or iPhones. They’re the stunning and seamlessly stitched images created by professional photographers, often for hotels, resorts, and other posh locations trying to woo customers. (There’s a helpful link on the site and in the app for business that want to hire a professional panorama-maker.)

The app is well-timed because location-based images are having a moment: Google has added interior shots to its Google Maps street view, and augmented reality, the overlaying of digital information on a real view, is getting a boost from the forthcoming Google Glasses. Microsoft has a similar product called Photosynth, but the UI is clunky and it has seemingly been forgotten by the software giant.

“With Apple, Google and Microsoft bringing panoramic photography to mobile devices, this is a medium primed for mainstream adoption,” said CEO and founder Charles Armstrong. “TourWrist is pioneering in important fields such as motion control algorithms and virtual tour business methods.”

So far, the app has been downloaded 700,000 times since becoming available in early 2011. There are now more than 40,000 panoramic images on the service of everything including resorts, clubs, nature, music festivals, and really messy dorm rooms.

“I find Charles’ product … to be visually stunning,” Benchmark Capital general partner Bill Gurley said in an investor panel following Wednesday’s demonstration. “He’s accomplished something truly remarkable … but there are some challenges around business model.”

The boot-strapped company was founded in 2010 by Charles Armstrong and has had $155,000 in funding. It currently has 13 employees and is based out of the Hatchery co-working space in San Francisco’s SOMA district. Naturally, there’s a 360-degree image of the office on TourWrist’s site.

Here are some of my personal favorite TourWrist images: The Russian Clown Circus, an honest to goodness man cave, and Alcatraz.

TourWrist is one of 80 companies chosen by VentureBeat to launch at the DEMO Spring 2012 event taking place this week in Silicon Valley. After we make our selections, the chosen companies pay a fee to present. Our coverage of them remains objective.