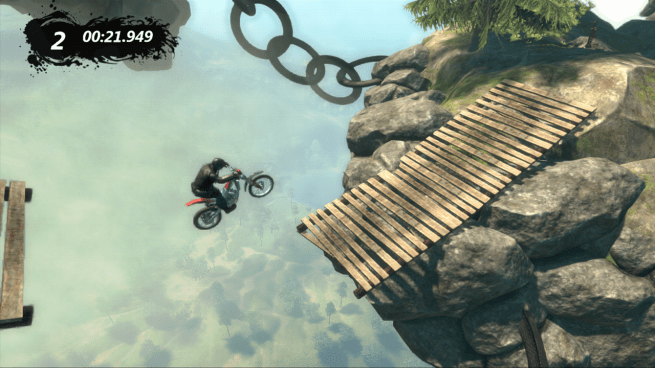 The formula is simple: You control a dude on a motorbike and must use careful timing and acceleration to traverse 2-dimensional obstacle courses. But so much can go wrong with simple ideas, and yet Trials Evolution doesn’t fall victim to a single one of them.

2009’s best-selling Trials HD kicked off the series with developer RedLynx’s patented physics-based gameplay, and while the award-winning title was undeniably awesome, it felt a bit claustrophobic. You always played in a warehouse, and you always played alone. Trials Evolution changes all of that in a big way.

Although a lot more is going on under the hood, the most immediately striking new trait of Trials Evolution is the wide-open environments. RedLynx has blown the doors way off the warehouse, introducing outdoor environments as large as two-by-four kilometers. That’s massive!

Beyond just looking and being bigger, RedLynx has provided a variety of visual templates, including war-torn beachfronts, nighttime castles, and beautiful aerial archipelagos. Although the Trials engine may not be as powerful as Unreal or anything like that, RedLynx has managed to squeeze plenty of aesthetic magnificence out of it nonetheless.

Fans were able to make some intricate and utterly impressive custom creations with Trials HD’s track editor, but that’s only the tip of the iceberg with what’s possible in Evolution. The addition of outdoor environments, roughly 1,000 items to utilize, power-ups, and the ability to twist and turn the track rather than always drive in a straight line open the door to countless possibilities.

Like LittleBigPlanet 2, however, the Trials Evolution editor is not restricted to signature Trials gameplay as many different genres, including first-person shooters and Marble Blast Ultra-style platformers, can now be created. Theoretically, your imagination, skill, and time is the only limitation to what is possible.

Sharing is also much, much easier now than it was in Trials HD, which only allowed you to share custom tracks with people on your friends list. Now you can browse and search tracks from any user, or even find, play, and rate the most-downloaded or RedLynx’s daily recommended picks.

By not being restricted to how you access new tracks, Trials Evolutions’ replay value is immediately and infinitely extended. 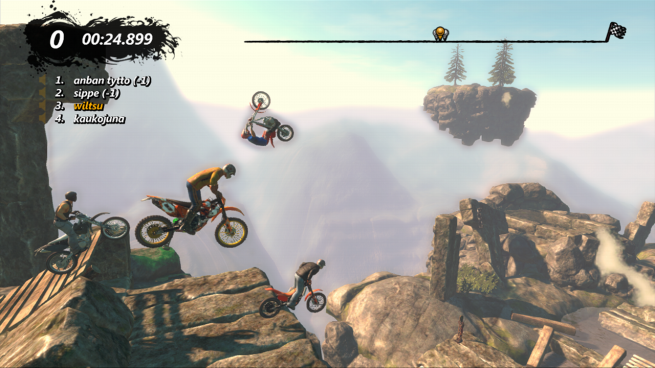 Fans asked for it, now Trials has it. Up to four players can race against each other on multiplayer-specific courses. The game takes on a sort of Excitebike-esque format in this mode, and that can be a lot of fun. I don’t really much more to say than that (it’s Trials with friends), but it is a major feature and one that deeply increases the game’s value.

If online or local versus isn’t your cup of tea, you can at least race your friends’ best times on any given track. Their names will appear and race alongside you in the single-player levels, allowing you to race their “ghosts” if you so choose.

I’m not sure anyone even cares about music in a game like this, but when the soundtrack cycles between pedestrian electronica and obnoxious, low-quality heavy metal, it’s hard not to be disappointed. No music at all would have been better than this.

The tracks and game world may have been greatly expanded, but the actual rider doesn’t get much love in the way of customization. A few unlockable shirts and gloves await, but they all essentially look the same. It’d be nice to get some more outlandish costumes or accessories for both the rider and the bike, but until then, this is the game’s only unpolished area.

And as we discovered in our interview with creative director Antti Ilvessuo, female riders won’t be making an appearance at all. Sorry, ladies!

Trials Evolution is the quintessential pick-up-and-play party game, especially now that multiplayer has been added. Anyone can “get it” within seconds of grabbing the controller, and the difficulty ramps up much more smoothly than in the original. While the custom tracks will undoubtedly be the primary source of Evolution’s replayability, the single-player offering is a robust, well-made package with plenty of gold medals to earn and second-to-second victories to claim.

Trials Evolution was released on April 18, 2012 for Xbox Live Arcade. The publisher provided a code for the final game for the purpose of this review.