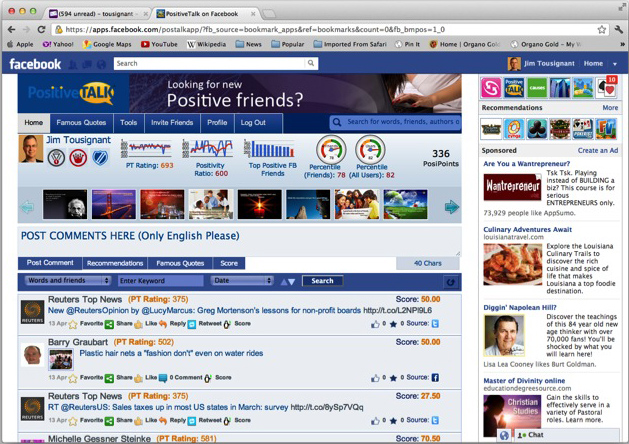 If you don’t have anything nice to say…

Just kidding! PositiveTalk is a web-app that attempts to accentuate the positive social chatter in your life. It eliminates the negative with a somewhat messy and crowded Facebook-esque interface, peppered with graphs and charts obsessively calculating positivity, inspirational quotes, and a hodgepodge of tools that try to gamify being perky. It looks at the moods of you and your friends by combing Facebook and Twitter, and makes suggestions for ways you can improve your outlook, going so far as too suggest new, better friends.

“It is very important that we consciously and consistently associate with positive people and choose positive words in our internal and external communication,” co-founder Jim Tousignant told VentureBeat. “Doing so results in attracting positive people into our lives, developing strong positive thoughts and beliefs, and achieving positive energy, positive feelings and emotional fulfillment in our minds and lives.” 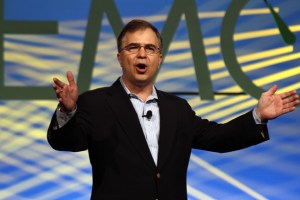 A beta version of the app was launched at the DEMO Spring 2012 conference in Santa Clara, Calf. on Thursday. The reason for the app, according the its founders, is to combat the global negativity epidemic. Mobile devices and social media are contributing to the scourge by increasing “the volume of negative online messages, emails, voicemails, text messages, instant messages, posts and tweets daily.”

Symptoms can impact your emotions, health, finances, personal life, and business relationships. You may already be infected and not even know it.

The company has some stats to back its claims up: According to PositiveTalk, studies show that 80 percent of the average person’s thoughts are negative (a quick sampling of things I thought while writing this post support the statistic). It also says the average person talks smack about themselves, in addition to the other people, family, friends, and co-workers with whom they interact.

“We think this is going to be a very provocative application,” Tousignant said on stage. In his mind, the tool will help people differentiate their friends online and ask themselves if they really want to associate with negative people.

A panel of experts had both positive and negative things to say about the company’s potential in a post-demonstration discussion. SugarCRM CEO Larry Augustin said he thought it was really clever and was going to tell his wife to sign up immediately. But Greylock Partners partner John Lilly said the startup will find it a challenge to try and fight natural human behavior.

The Orlando, Fla.-based company was started by Tousignant and Tom D’Ambrosio in 2011. Currently, the app-company has seven employees and has raised $150,000. The founders launched a $1 million first round of investing at the DEMO conference.

PositiveTalk is one of 80 companies chosen by VentureBeat to launch at the DEMO Spring 2012 event taking place this week in Silicon Valley. After we make our selections, the chosen companies pay a fee to present. Our coverage of them remains objective.