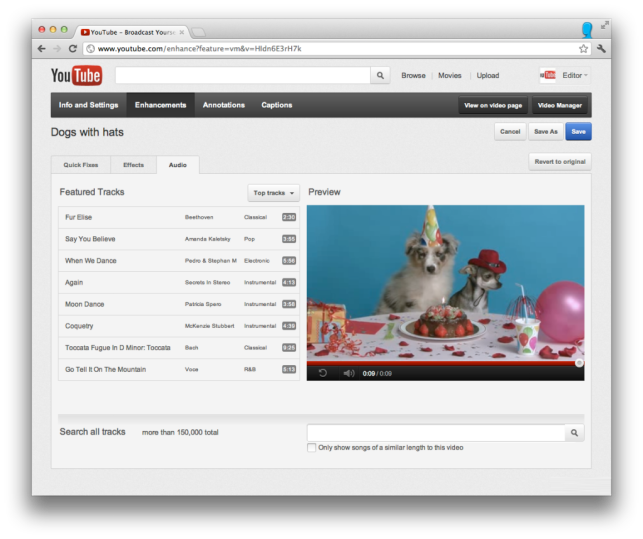 As part of its continuing effort to make video production easier, YouTube is rolling out a new set of audio editing tools, the website announced on its partners blog today.

Previously, YouTube offered an AudioSwap feature that let you replace a video’s sound with one of many tracks from the site’s own library. With today’s upgrade, YouTube has boosted the number of available tracks to over 150,000. It’s also now possible to adjust the volume level of those tracks — meaning you can overlay music on top of the video’s original audio. (Hypothetically speaking, I could see myself adding the calming “hum” of a warp drive engine to the background of all future video uploads — provided YouTube eventually adds that sound to its track library, that is.) YouTube has also given the user interface a refresh to help make it easier to navigate.

These improvements are nice for a couple of reasons. First of all, it should help cut down on copyright infringement from people who want to add audio to their videos, but don’t necessarily have many options beyond their iTunes library. And secondly, it’s giving people a way to do some decent video production without having to use expensive or complex editing software.  YouTube already launched tools to make it easier to edit the video quality of an upload (as well as its more extensive online video editing tools), so audio is the next logical step.

The new audio tools should be available to everyone in the next few days. To try them out, just navigate to the Video Manager’s edit settings.