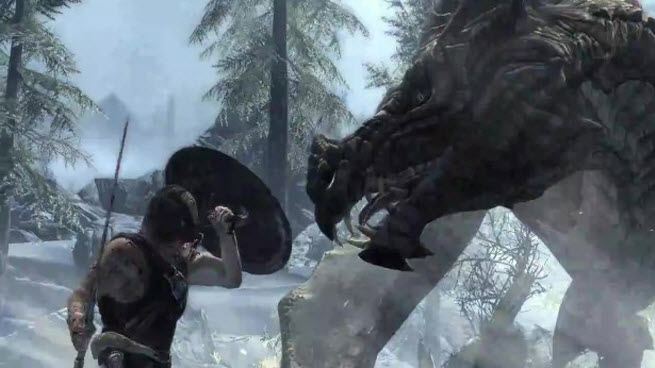 Microsoft’s Kinect motion-sensing system is making its way into hardcore games, but not in the way everyone thought. The Elder Scrolls V: Skyrim, one of the hottest-selling games from the fall, will exploit the voice-recognition feature in Kinect so that you can more easily navigate through the game’s complex interface. And you can cast spells more easily by shouting them.

The Kinect retrofit is an interesting way to keep fans occupied with the game, and it is an interesting experiment with how games could be built in the future, with voice recognition designed into them from the very start. Pete Hines, vice president of marketing and communications at game publisher Bethesda Softworks, showed off the interface in an interview with GamesBeat last week.

The Kinect add-on will be part of a free update to the Xbox 360 version of the game. The update is already live. It should be a new source of entertainment for the 10-million-plus people who bought the game. On average, gamers are playing Skyrim for 80 to 85 hours. Anything that makes it easier to play, given those long hours, would be welcome for hardcore fans.

“The point is to make it easier to navigate through the game,” Hines said.

It’s notable that Bethesda chose not to use gesture recognition, which is the main feature of Kinect. But judging from most other titles, developers have found that Kinect’s gestures aren’t accurate enough to use reliably in hardcore games. But voice recognition, which is aided by the three microphones included in the Kinect 3D camera, works well enough.

BioWare, a division of Electronic Arts, implemented Kinect voice commands in Mass Effect 3. That helped with the game play, as it allowed you to issue orders to two companions using voice commands, rather than stopping the action, scrolling through a command wheel, and issuing commands with a controller. When things were hot and heavy, you could shout a command that could save your bacon.

The work on Kinect started a few months ago, after Skyrim was already on sale. Game studio head Todd Howard directed the team to create anything they wanted for a week, as long as they implemented it inside the world of Skyrim. A Bethesda developer, Ricky Gonzalez, decided to make voice recognition work in the game. He got the bare bones done and then Bethesda decided it was interesting enough to put a small team to work on it. Over the last couple of months, they created the full set of features. Now you can issue around 200 different voice commands in the game.

The simple commands involve navigating through the complex user interface. You can say “quick map” and Kinect will bring up the map of Skyrim. If you say, “White Run,” it will take you to that town. All of the town names are now integrated into the system so that Kinect will recognize them. You can go into your journal and then ask where your quest destination is. You can navigate through the skill menu quickly just by saying the name of a skill. You can call up various spells after you say, “quick magic.”

You can say, “assign sword” to equip a weapon. Within a minute, you can pretty much change your weaponry. You can say commands that allow you to dual wield or switch weapons during the middle of combat. The highlight of the system is using Kinect to implement the voice-powered spells, known as Dragon Shouts, in the game. Normally, you would have to stop the action and issue a command with the controller. But with Kinect, you simply shout the command, such as “unrelenting force,” and it executes it. Many of those shouts require you to select options from a menu, so they can take three button-pushes to execute normally. With Kinect, you can issue the shout in far less time using your voice.

Another cool feature is that it can automate some processes. For instance, when you loot a corpse, you can set the loot limit to 50 points. That means you will only pick up items from the corpse that have a higher value.

It doesn’t always work. Hines had to repeat himself a number of times during the demo. If you position high-end speakers near the Kinect module, your voice may be drowned out by the sound of the game. For instance, if it is raining in the game, it’s pretty hard for Kinect to filter out the noise and recognize your commands.

But adding Kinect can make it faster to play the game and get to the fun, so you don’t have to wrestle with the user interface.