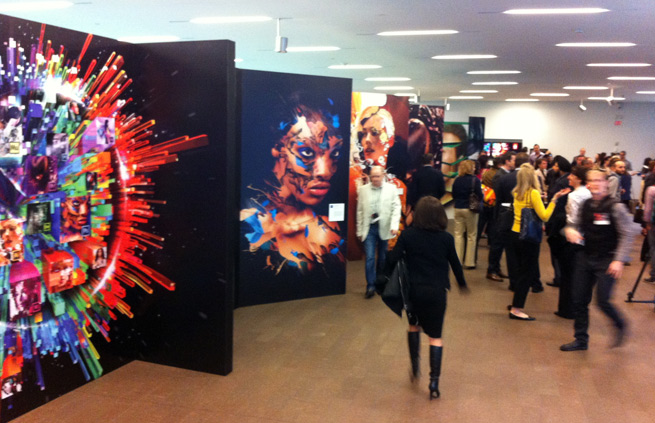 To promote the upcoming release of its Creative Cloud subscription service and the latest version of its Creative Suite software collection, CS6, Adobe hosted a flashy launch event at the de Young Museum in San Francisco Monday.

While Adobe released most of the big news about the new Adobe Creative Suite 6 and Creative Cloud products at midnight in advance of the event, it did save some news for the large crowd of press and creatives, including a detailed demonstration of the improvements to CS6, results of a large study on creativity, and details about a new scholarship program.

Adobe chief executive Shantanu Narayen took the stage to give a recap of Adobe’s history and greatest hits, as well as to talk about the importance of creativity in the economy. “Creativity goes way beyond just art, and the impact goes way beyond each of us as individuals.” said Narayen. “It is actively fueling the economy.”

First up was a demonstration of the latest features in CS6. Adobe touted CS6’s improvements in performance, thanks to the Mercury technology that is now in all core products. There is an enhanced user interface that focuses the user’s attention on their work with minimal distractions. Responsive content is a new star of the suite, with tools that make building for mobile and outputting to HTML 5 easier. Finally, the suite has plenty of Adobe’s “killer features” — the fun tools that get all the attention — such as content-aware fill.

Adobe evangelist Paul Trani and senior product manager Steve Forde did quick demos of various features in the core apps, as well as the interactive media and publishing tools. Amusingly, the main new feature for Flash Professional 6 is that it outputs to HTML 5.

Jeffrey Veen, senior director of products, did a demonstration of the Creative Cloud interface. The service gives you 30 gigabytes of storage, the ability to host up to 5 sites, and a full TypeKit membership. He logged in and went to the Creative Cloud Connection, a little piece of software that keeps all your devices in sync with every file and software update in the cloud. He didn’t mention any limit to the number of machines you can install CS applications on with your creative cloud membership, which implies a nice increase from the two machines you’re limited to with the traditional Creative Suite install.

Adobe also announced the results of a study it commissioned of 5,000 people in the U.S., UK, Germany, France, and Japan about creativity’s place in business, education, and society. The results sketch out a problem that Adobe calls the creativity gap: Only one in four people feel they are living up to their full creative potential. It’s a problem not just for the creativity-impaired but also for the economy. Eight in 10 respondents said creativity was key to economic growth, and two-thirds think it’s “valuable to society.” The gap is a global issue that, coincidentally, Adobe thinks its products can help solve.

Adobe also announced it was putting up $1 million to start the Adobe Foundation, a scholarship program for high school seniors in the Adobe Youth Voices program to pursue careers in creative fields. “We hope this will inspire the next generation of creative artists to pursue their dreams in whatever field they choose,” said Narayen.

Creative Cloud memberships can be pre-ordered now and should be available sometime in the next month. An annual subscription for Creative Cloud costs $50 a month for individuals who sign up for a whole year, or $75 a month for the less committed types who only want a month-to-month arrangement. If you’d like to go retro, Adobe is also offering registered users of earlier Creative Suites (CS3 through CS5.5) a lower introductory rate of $30 a month.

While the Creative Cloud marks the end of physical software boxes, Adobe commissioned real artists to design each of the boxes for the new products.