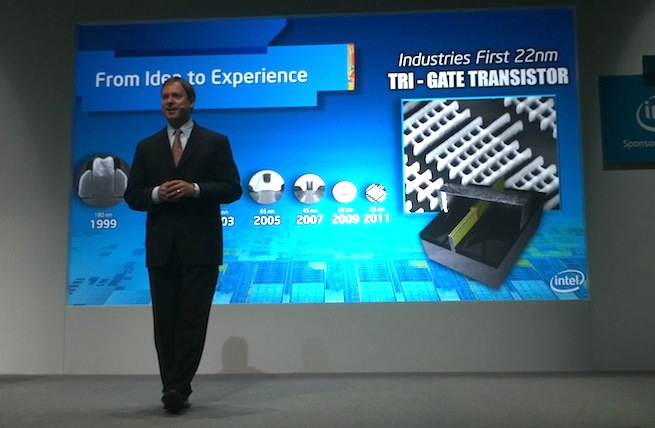 The long-awaited next generation of Intel processors has arrived. Intel announced its 22 nanometer processors, coded-named Ivy Bridge, at a press conference Monday.

We all knew Ivy Bridge would be fast, but these new processors are about 20 percent faster than Intel’s previous offerings. Intel also says the third-generation Core chips operate with 20 percent less energy than Sandy Bridge, the code name for the previous generation of processors.

“I’m here to say that Moore’s Law is alive and well,” Skaugen said.

Thunderbolt and USB 3.0 support is integrated with Ivy Bridge, which makes data transfer between cameras and external hard drives faster. USB 3.0 has been introduced for PCs and Thunderbolt is available on Apple computers and one Sony Vaio model.

What will catch many gamers’ and video editors’ eyes is the integrated graphics processing unit, which will make editing videos faster and game play sharper. One-third of the chips’ estimated 1.4 billion transistors are contained within the GPU.

Ivy Bridge will also offer support for up to three displays, for those who like wide computer real estate on their desks.

Previous computer chips had a flat transistor design, but Ivy Bridge employs tri-gate designs, in which the microscopic transistors contain a small, raised “fin,” enabling greater density of transistors on the chip and also facilitating lower power consumption. The raised nature of the chip has led to Ivy Bridge’s “3D” moniker. Intel has been working on tri-gate technology since 2001, and made a splash when it announced the new transistor in 2011, but this is the first family of chips to contain the new type of transistor.

“Even back [in 2001] we realized the planar structure would run out of steam,” said Mark Bohr, an Intel senior fellow who led the development of tri-gate transistors.

“We had reservations [about adopting tri-gate], but after Mark described the performance enhancements…especially at low voltages, we were convinced its was the right choice,” said Intel program manager Brad Heaney.

Intel’s chips fall into “Tick” and “Tock” releases. Tocks are major processor architecture changes and ticks are smaller process changes based on the same architecture. Intel is calling Ivy Bridge a “Tick+” because it is adding a new processor and media subsystem.

Despite a marketing campaign that Intel started at the Consumer Electronics Show in early 2012, the new chips won’t be immediately available for Ultrabooks, powerful and thin PC laptops that would compete with the MacBook Air. Instead, they will be used in Intel’s Core i7 and Core i5 quad-core processors for desktop and laptops first.

Intel said that manufacturers are planning more than 270 desktop and all-in-one models and 300 laptops based on the new processors. Pricing for the new processors will be close to Sandy Bridge, so we shouldn’t see a dramatic price increase on the consumer end.

Intel wouldn’t say exactly when we can expect ultrabooks with Ivy Bridge, but said it would be in the next couple of months. Ivy Bridge for ultrabooks will be dual-core processors ad run at a lower voltage to accomodate the thinness of a ultrabook, Skaugen said.