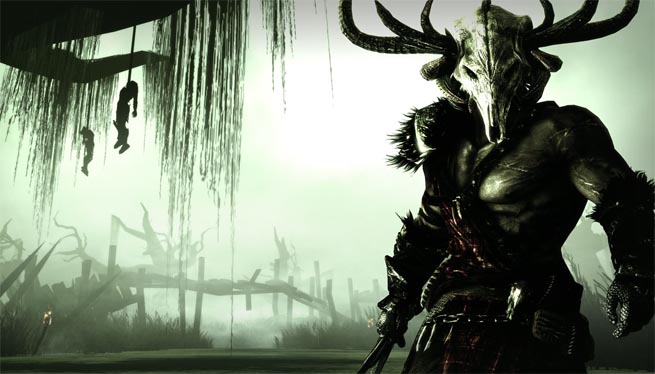 The soundtrack to Bloodforge is all wrong. It’s a lot of slow, bassy, boomy, serious Classical Thunder-type stuff. What it ought to be is more like Scandinavian heavy metal, because this game is a metal album cover come to life.

Crom, the barbarian hero of our story, does not wear a helmet on his head. He wears a skull, the skull of some giant primordial horned buffalo thing. He wears the skull all the time, too, not just when he’s rampaging forth to cut people’s torsos free with a sword about six foot long. Even at the beginning of the game, when he’s in theory retired from the slaughter business and settled down with a wife and kids, he still has the skull on. You get the idea.

Bloodforge isn’t a great game or even a good one in some respects. It’s not very polished, and it’s not very deep. For some of us, though, it’ll dish out 15 bucks worth of violent lunacy. And let’s be honest with ourselves. Sometimes we just want to hit some buttons and watch some heads explode.

Cutting up meat
Bloodforge offers a range of different methods for exploding those heads, or chopping off limbs, or hacking guys clean in half, or killing them in really creative ways. Plain old decapitation is around the baseline for violent death in this game. “Rage kills,” special instant death moves, encompass such feats as Crom cutting an enemy’s head and neck loose, reaching into the stump with a gauntleted fist, and rooting around until he’s got a good enough grip to yank some vital organs out. 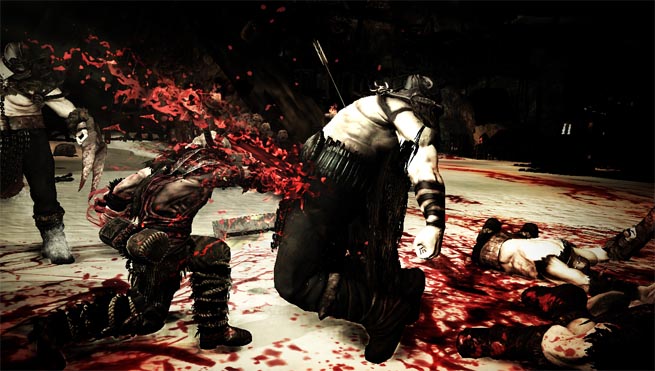 Some readers now know for sure and certain that they don’t want to play Bloodforge. For the rest, this is surely a hack ‘n’ slash game, but it’s a hack ‘n’ slash with some decent variety to it. There are three weapons with their own distinct styles and combo trees, a crossbow for plinking at enemies from a distance, and “rune attacks” to unlock as the adventure goes on, which are essentially magic spells. Those do fun things like holding enemies immobile, so Crom can wail away until a giant demon head rears up from the ground to eat them.

Crom’s adventure runs through half a dozen levels and lasts about as many hours. That’s as long as it needed to be. As it is, the hacking and slashing inevitably starts to repeat itself after a while. If Bloodforge had tried to go for 12 or 15 hours of campaign, it would have been a miserable slog. Actually, it could have run perhaps an hour or so shorter and come out an even tighter package.

Pulp fantasy style
Although everything else about the game is as subtle as a punch in the nose, the art direction in Bloodforge actually holds back in some valuable ways. This isn’t a shiny, bright Technicolor sort of game. The backgrounds and most of the characters have the washed-out palette of something like a Frank Frazetta painting — lots of black and white and pale browns and grays. It’s not as monochromatic as, say, Sega’s MadWorld, but it’s leaning a little in the same direction.

The way light and shadow work together create a very pretty look for the game world in its own right, more interesting than an attempt at straight realism, and the restrained backgrounds help set off the stuff that winds up in front of them. When the game decides to get really excessive — as with the third boss, Calliach, an inspired achievement in awful rotting grossness – it has the desired effect. Rage attacks notwithstanding, we aren’t quite so numb at that point that we write it off as another mild shock.

Uneven balance
In a lot of little ways, Bloodforge gives the impression that it was polished and balanced to an extent, but only so far. The difficulty progression, for one, is all out of whack. Of the six or so boss battles, the second one is unquestionably the hardest. In fact, the entire endgame is kind of a pushover compared to the second and third levels. Looking back on the campaign as a whole, the challenge curve peaks somewhere just before halfway through.

Likewise, there’s some inconsistency to the mooks that populate each level. Some of these are fairly well-designed. They put up a fight, and it takes a reasonable effort picking targets and mixing up combos to bring them down. But they don’t last so long that they grow tedious to deal with.

On a regular basis, though, Bloodforge also spawns super-size trollish monsters that need more balancing work. There are essentially two ways to kill them. One is to trigger Crom’s berserk mode and use a rage kill, which drops them in one gory shot. If Crom doesn’t have enough juice in his berserk meter, or if two big guys spawn at once, the only other option is a tedious hit-and-run strategy, sticking and moving and poking with crossbow shots for what seems like ages.

That second boss battle has the same basic problem — engaging at close range is nearly impossible, and fighting at a distance isn’t fun. If a game like this is going to put us in the boots of a mighty-thewed barbarian, it shouldn’t then go on to make us fight like a coward in order to survive. 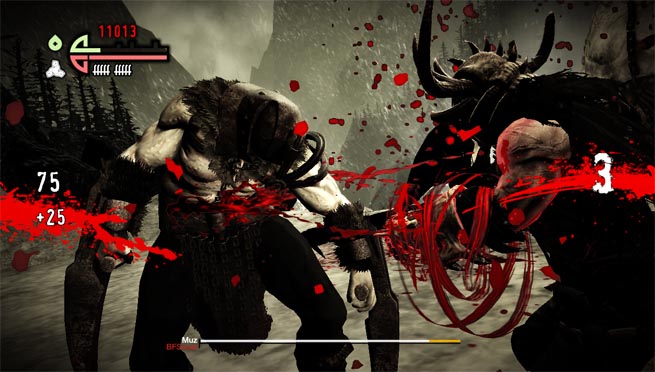 Hack, slash, hack some more…
Once again, this isn’t quite a game where you can hit the “win” button and watch the bad guys fall down like bowling pins. There’s some depth to picking the right weapon and the right combo to succeed. Crom’s warhammer, for instance, may be slow, but it has a lot of punch and some nice wide-angle attacks, so it’s surprisingly good at crowd control. His claws have the longest combo strings, so they’re good for tying up a single target (and besides, they just look cool).

That said, and this ties in somewhat to the not-so-smooth difficulty curve, Bloodforge does start to repeat itself down the back stretch. Once Crom unlocks his longest sword combination moves, it becomes unfortunately easy to fall into the habit of relying on one or two easy money combos. If the later levels featured more new and challenging enemies, that might force a corresponding improvement in tactics on the part of the player. Instead, the mooks are more or less the same as the ones in earlier stages. The bosses, if anything, get easier.

The art direction and a couple of surprising plot twists do their part to pull the player through to the end of the adventure. It’s just too bad that the action couldn’t keep up its corner of the load from beginning to end.

Bloodforge is a decent example of a game that wouldn’t work outside of Xbox Live Arcade. If it had been a full-priced release on a physical disc, this review wouldn’t have been half as kind. It doesn’t have a concept or a content package that could justify a 50 or 60-dollar price tag. But at 15 dollars, it’s a production that some gamers will enjoy taking a flyer on. Do you like to hack, do you like to slash, do you like to chop heads, do you like sharp fantasy artwork? Then you might like to spend a few hours inside Crom’s skull.

Bloodforge will be released on April 25, 2012 for the Xbox 360. A download code was provided by the publisher for the purpose of this review.