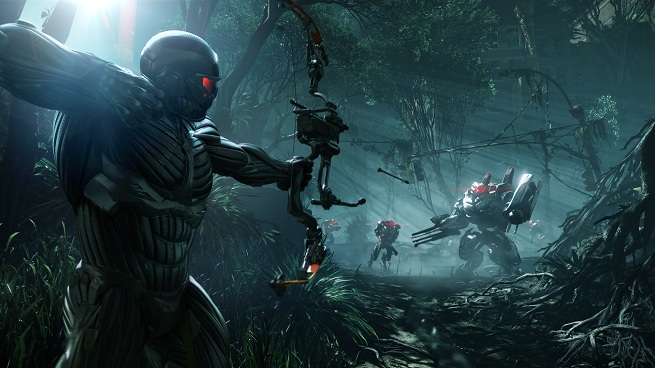 Prophet wants blood. It’s difficult to blame him. After all, he’s been hunted since Manhattan crumbled from an alien-engineered virus in 2011’s sci-fi first-person shooter, Crysis 2. The diabolical CryNet Enforcement & Local Logistics (CELL) organization seeks his powerful Nanosuit technology. The monstrous Cephalopod invaders — tentacled space squids — just plain kill anything they meet. And on top of it all, his consciousness’ mental roommate is a half-sane soldier who shot himself after saving the world.

Enough running. As Prophet himself eloquently states: “We’ll see who gets hunted.”

Set 24 years after the events of Crysis 2, Crysis 3’s New York City sags beneath over two decades of decay and utter ruin. CELL is in full containment mode, erecting a gargantuan Nanodome around the wrecked city as a means to quarantine the rampant virus outbreak introduced by the Ceph. Overgrown flora chokes avenues and buildings with a dense mire of twisting vines and massive trees. It’s a common sight for post-apocalyptic sci-fi — and a clear throwback to the franchise’s wilderness roots — but according to Rasmus Hojengaard, director of creative development at Crytek, it’s the climactic stage for the series’ crescendo.

“It’s essentially a highly advanced greenhouse,” he said during a recent press event. “We didn’t want to just paint a little green color over the cracks and call it a day. We wanted the city to define the shape of the rainforest, which in turn shapes the mood and storytelling of Crysis 3.” 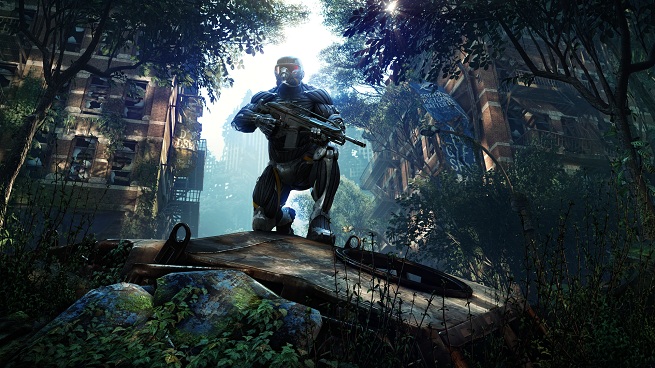 Hojengaard also hinted CELL’s ulterior motive for constructing the dome wasn’t quite benevolent. Spoiler: It involves the words “world” and “domination” in it.

And yes, before you ask: The game looks amazing. CryEngine’s double reputation as the bleeding edge of graphical fidelity and the most consistent slayer of any PC hardware that’s not a supercomputer makes Crysis 3 pop off the screen like James Cameron’s wet dream. “We’ve probably invented the most insane lensflare system ever conceived,” Hojengaard boasted. Take a hike, Abrams.

In a short gameplay video, Prophet showed off the bow’s effectiveness in silently dispatching Ceph grunts from afar with carefully placed arrows, a mixture of high- and low-tech reminiscent of Turok: Dinosaur Hunter’s Tek Bow. Long-range shots provided a dramatic arrow-cam tracking the bolt piercing its target with a satisfying crunch.

As Prophet stealthily traversed the remains of Chinatown, an aerial remote — small, hovering probe-like enemies — stripped his cloak and sapped his suit’s energy in mere seconds. Hojengaard said “plenty of new countermeasures” such as the remotes exist to prevent players from simply sticking to the bow-and-camouflage combo throughout the game. Rambo would be disappointed, but that gives Prophet all the reason he needs for touting louder (and more explosive) weaponry such as the Typhoon rifle. 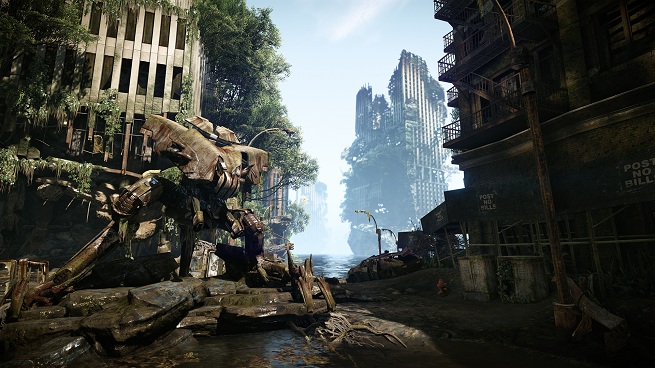 In a word, the Typhoon is ridiculous. In two, it’s really ridiculous. Its rate of fire settles somewhere between caffeine injections and cocaine, and it sprays lead with a sound like an angry wasp hive belching its contents. Going rock-and-roll on CELL and Ceph alike never gets old, but ammo management will be critical.

Prophet’s sleek Nanosuit doesn’t skimp on pimpage either. A new suite of hacking software conveniently installed itself after Crysis 2 closed up. In addition to the still-cool standbys of armor, speed, and stealth suit enhancements, Prophet can now tinker with certain electronic objects from afar, starting from simple turrets and door switches before scaling to “epic proportions” at end-game, Hojengaard said.

The Nanosuit also busied itself infusing increasing amounts of alien technology into its systems. As a result, Prophet’s arsenal swells with the capability to pick up and use Ceph weaponry. Halo players will feel right at home here — like the Covenant, every Ceph gun has a finite power cell before draining completely.

The Nanodome beckons. Manhattan rots away into nothingness. Prophet is locked in with everyone who wants him dead. But come Crysis 3’s spring 2013 release on the PC, PlayStation 3, and Xbox 360, everyone will learn they’re locked in with Prophet.