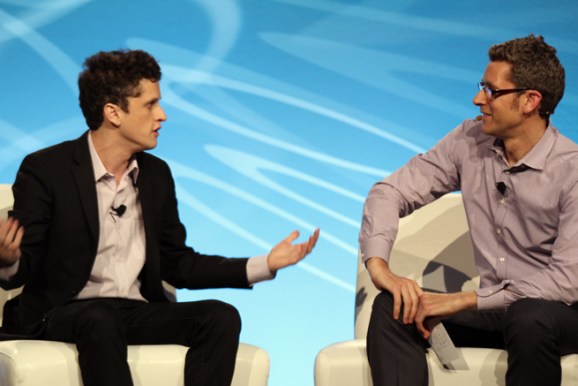 At small dinner I attended last night with Levie, CloudOn CEO Milind Gadekar, ZenDesk CEO Mikkel Svane, and Enterproid CEO Andrew Toy, the talk was supposed to be about the challenges of the enterprise software market. Of course, the dinner instead coincided with the launch of Google Drive earlier in the day, and thus at least some of the talk drifted in that direction.

Before dinner and serious enterprise discussions got going, I pulled Levie aside and prodded him more about how Box would compete when Google Apps is used by so many businesses and is convenient for those users.

I asked him if Box could “out-feature” Google. “No, that’s Microsoft talk,” he said. “We don’t have to play in both worlds like Microsoft and Google do. Google wants to lock people into its services and needs a billion eyeballs to look at ads. We don’t.”

Levie drew this diagram for me to describe where Box was in the marketplace relative to Dropbox and Google:

The line in the middle is the divider between consumers (left) and businesses (right). Dropbox is a consumer-driven player, Google leans consumer but wants some businesses too, and Box leans business but want some consumers. But as it stands, Google (and maybe Microsoft too) could gobble up the smaller guys’ clients.

I told Levie I was worried there might be too many players and that something has to collapse. He let his guard down for a brief moment, and said, “I’m more worried than you.”

Usually Levie doesn’t say something like that. The armor was down, just for a moment. Right after speaking with me, he cracked a joke about the timing of the dinner, saying, “Google has been trying to launch this for six years, so of course it had to coincide with one of our dinners.”

And on Twitter today, Levie was back to his antics. There he wrote, “Haven’t heard someone say “Google Drive” in at least 7 minutes; a clear sign that it’s going nowhere.”