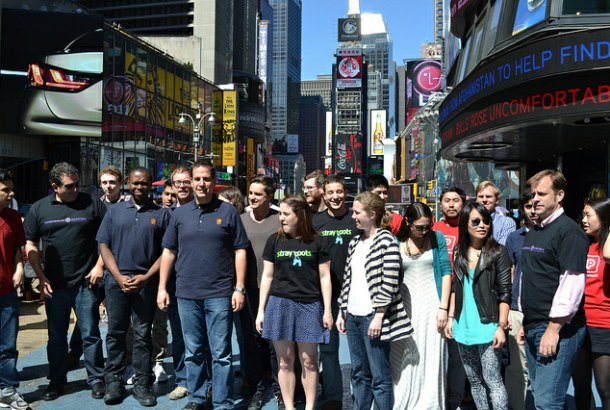 Today’s a big day for ten of New York City’s most interesting startups. Entrepreneurs Roundtable Accelerator is having its demo day today, and for the ten companies in its second cohort, it means they’ll have to show just how much they’ve learned in their three months at ERA.

Charlie Kemper, co-founder and partner at ERA, said that all of the companies demonstrating today have users and are actively in the market with products. Even more impressive, 60 percent already have revenue coming in.

ERA provides companies with $25,000 in seed financing, three months of free co-working space in its Times Square office, and access to an impressive network of advisors in New York City. Entrepreneurs Roundtable initially started out as an educational organization for New York startups in 2007, but after seeing how much the city’s tech scene grew, it launched the accelerator last year.

Here are the ten companies that demonstrated today:

It seems there’s an app for everything these days, even weddings. Appy Couple offers newlyweds their own personal wedding apps, which guests can use to take pictures, find directions, and otherwise socialize at the wedding.

After sending out 200 private beta invites last month, Appy Couple ended up being used for 150 weddings. Since then, the app has seen viral growth, powering 3,000 weddings so far. The company makes money by charging a 4 to 11 percent commission for purchases within the app, which can include things like hotel bookings.

Wizpert has created a platform to connect experts with advice seekers (check out our coverage from earlier today). Basically, you can think of it like a help desk for life. The company announced today that it has signed up over 1,000 experts, or “Wizperts,” after several weeks in private beta testing.

LetsWombat helps brands connect to consumers with targeted, traceable, and scalable product sampling. The company has 10 brands signed up so far, and it says that 90 percent of the companies it talked to jumped aboard. VitaCoco, one of its current customers, is a big fan of the company’s analytics reporting. LetsWombat charges companies a base fee, plus additional fees based on audience targeting and geographic targeting.

What if you could create your own Amazing Race? Stray Boots lets you do just that by turning urban exploration into a game. The company lets you buy fun and interactive guided tours of cities. The company already has over 40,000 customers, who’ve paid between $6 and $12 for its tours — and that was just with a text-message based platform.

With the Stray Boots 2.0 app, the company will ramp up the media in tours and offer a better exploration experience. The company’s iPhone app is in private beta testing right now, and it will hit the iTunes store later this Spring. Stray Boots is now in 15 cities in the U.S. and UK, and it expects to reach 30 cities by next year. Setup for a game costs around $2,000, and for an entire city it can cost between $50,000 and $100,000. The company says typical cities can earn over $1 million in revenue annual

Funding: Raising $1.2 million, with $200,000 already committed. The company expects to make over $1 million in revenue this year.

TapFame helps developers drive mobile engagement and increase user retention. The company’s platform enables devs to reach inactive users, giving them a second or third chance with consumers, through flash contests within their apps. With just three apps using its platform so far, TapFame now reaches 100,000 users, and its customers are seeing a 50% lift in engagement.

Stylyt lets consumers create their own custom products for big-name fashion brands, in the process making them more engaged and committed to those brands. Based on partnerships with two brands and over 1,000 signups, the company has seen 21 percent of users submit content, while 62 percent voted and shared entries.

Stylyt says it helps with demand forecasting, so brands aren’t left with unused inventory. The company announced today that it has partnered with popular fashion brands Nicole Miller and Rebecca Minkoff.

In its New York City pilot program, over half of LocalBonus users made purchases at its 70 participating retailers. The company announced yesterday that it has expanded to five cities, with the addition of Denver, Seattle, Portland, and Sacramento. It now has over 800 merchants on-board, and it’s on pace for over 1,500 merchants this year across 12 cities. The company has over 200,000 customers so far.

Taking social shopping to new heights, Dibsie has launched a platform to let your friends curate your shopping experience (check out our existing coverage). The company users activity from your friends to increase product awareness and drive engagement. So far, its users spend around 15 minutes on the site daily and have driven over 1 million product impressions.

Impressively, Dibsie has managed to grow purchases from 4 percent to 16 percent simply by making friend curation visible. The company’s platform can also be integrated on other sites, and it’s working to partner directly with brands and retailers. Licensing the Dibsie platform is one of the companies biggest goals right now.

Pictorious crosses social gaming with photo sharing by letting users create fun photo-based challenges. It’s not just about sharing photos with filters like Instagram — instead, you can create photo contests for your friends to participate and vote on. The company says its platform is a great way for brands to increase engagement.

In a beta test with more than 1,000 users, 33 percent of Pictorious users created photo challenges, and overall they generated 2,000 photos and 30,000 views.