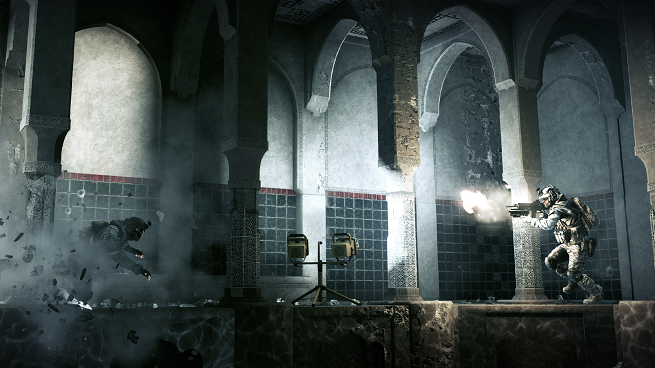 UPDATE: We’ve added a trailer and a gallery of brand new screenshots to the story!

Battlefield 3 is slimming down. Our initial foray into the military first-person shooter’s incoming Close Quarters map pack (arriving in June for the PC, PlayStation 3, and Xbox 360) detailed a battle plan focusing on intense infantry firefights and smaller, fragile stages. At a recent press event in San Francisco, publisher EA deployed a choice sampling of the new Conquest Domination multiplayer mode set within the bullet-soaking walls of the Donya Fortress map.

Donya Fortress’ design mimics…well, a fortress, its whitewashed walls gleaming with sunlight and the blood graffiti from your latest headshot. The Kremlin’s square-shaped, multileveled layout throws out multiple fire angles to keep track of, including a stony basement, mirrored terraces, and a central, exposed courtyard (read: instant death). Archways, columns, and strewn pieces of furniture blithely get in the way of drawing a bead on an enemy but also serve as suitably solid objects to duck behind.

Three control points, spaced closely together, sit on a terrace, the main courtyard, and an adjacent chamber, respectively. The cramped passageways deny favoritism of a particular spot, as each flag bestows tactical benefits for its conqueror. The terrace overlooks the courtyard with a natural height advantage, the courtyard provides quick access to the other two points, and the chamber easily funnels enemies with multiple blockades.

Here are a few observations I made after some hands-on matches:

Forget about vehicles. Start loving your sprint button. You’re hoofing it everywhere, but unlike BF3’s stock maps, becoming a cross-country track star isn’t a requirement. I already consider tanks, jeeps, and personnel carriers rolling rocket-magnets, so trading lead on maps scaled to tete-a-tete skirmishes without worrying about taking a 120mm shell up my nostrils is a very alluring prospect. Dedicated chopper, jet, and tank pilots, however, might shy away from Close Quarters’ strictly footsoldier theme.

Shotguns, submachine guns, and fast-firing assault rifles reign supreme. Old reflexes honed by Mountain Dew-fueled Counter-Strike benders jolted awake after I realized twitch-based gameplay wins the fortress for your team. (Twitch gaming is the art of honing reaction time to rapidly get those crosshairs on target as fast as possible.) I reacquainted myself with zippier guns such as the F2000 rifle, MP7 SMG, and the new M5K machine pistol with great success. Typically scorned as a newbie tactic, spray-and-pray rifle-butts its stigma and quickly becomes the de facto tactic during a scrap.

Shotguns, of course, are in their element. A major (and hilarious) highlight of the session was witnessing my fellow journalists’ conspicuous progression from individual loadout preferences to roving shotgun gangs, a predictably effective strategy. Forums will assuredly flow with rage from the inevitable buckshot bonanza (blood still boils from the now-balanced USAS shotgun’s domineering infamy), but I personally enjoyed seeing these pump-action painbringers get a boost in viability.

You’ll get shot in the back…a lot. Did you get used to having a rear base as a safe respawn? Kiss it goodbye. When you hit dirt in the fortress, you’ll have a bullseye painted on you in but a microsecond. Assault lines constantly shift and roil as both teams scramble for real estate, and that spearhead push with your squad flat-out melts if an enemy simply reappears behind you. That extra layer of challenge to spatial awareness underscores the importance of teamwork and communication…especially when that grenade-spamming, camping hoser (don’t deny it; there’s one on every team) ruins a perfectly good ambush.

Flags capture insanely fast. In normal Conquest mode, flags flip from enemy control to yours at a sluggish pace, often taking 20 agonizing seconds or more for a full capture. Conquest Domination pumps some adrenaline into the capture rate, and just one second is enough time for nabbing a zone.

The possibilities for clutch moments run high: During one of the last rounds, my team was on the ropes. We had just lost the chamber point in a spectacular hail of bullets, tile shards, and wood splinters, cinching all three points in the enemy’s hands. I slapped a silencer on my gun which muffles noise and prevents my appearance on radar when I fire. Juking to the courtyard, I faded into a sub-passage while spam-fire and grenades ravaged my diversion. The plan worked: The terrace point was deserted. I swooped in and slapped the enemy’s flag off its pole, and in a five-second span, my team reaped revenge on its aggressors in a Hail Mary win.