While the week has been dominated by cloud storage news in the wake of Google Drive’s launch, Dropbox has dropped in with its second new feature of the week: automated photo uploading from its PC and Mac clients and a new Photos page.

Tying to its February announcement of automated photo and video uploading from Android, the Dropbox team has extended that ability to just about any camera or SD card you can plug into a computer. Just plug in your device while the Dropbox app is running on Mac or Windows, and it will automatically detect and walk you through uploading.

“Getting pictures off your camera has always been a huge pain,” Dropbox Software Engineer wrote in a blog post. “So we put our heads down and worked worked worked to ensure that automatic upload would play nicely with anything that might have a photo or video on it. With the newest version for Mac or Windows, you can just plug your camera, phone, or SD card into your computer, and with a few clicks of the mouse all your photos and videos are in your Dropbox.”

Photos are copied from your camera to Dropbox in full quality and original size to your private “Camera Uploads” folder. Although, be careful, as that can eat away at your storage pretty quick.

The company also has a new Photos page on-site for easier browsing. There you’ll see larger thumbnails and photos now grouped by month. If you hover over a photo, you can see the date it was uploaded. Or you can click to see the photo in full-size and download it.

Earlier this week, Dropbox introduced an awesome new way to share content in the form of simple links, even if that content is stored in Private folders. Little did the company know that right after its announcement, Microsoft, Google, and Box would all follow its news with their own updates.

San Francisco-based Dropbox has raised around $257 million in funding to date, with the majority of that coming from its massive $250 million round last October. Investors include Sequoia Capital, Accel Partners, Benchmark Capital, Goldman Sachs, Greylock Partners, Institutional Venture Partners, RIT Capital Partners, Valiant Capital Partners, and Hadi and Ali Partovi. It also counts Bono and The Edge from U2 as investors.

You can check out the new Dropbox Photos page below: 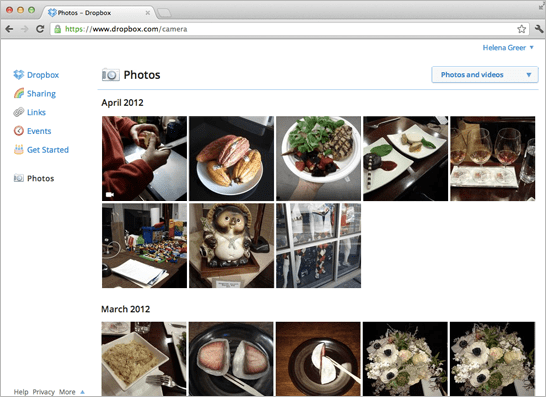