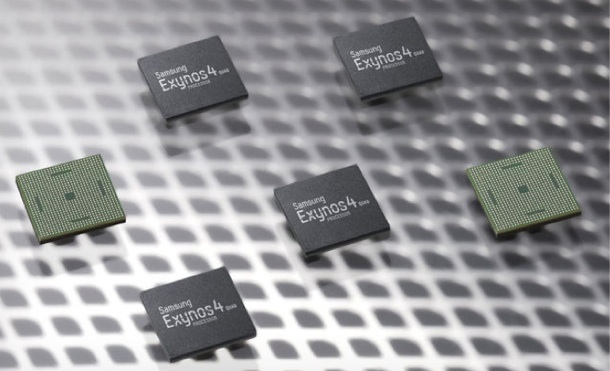 Samsung’s next flagship smartphone, the Galaxy S III, has long been rumored to sport a quad-core processor. But instead of waiting until its May 3 launch event, Samsung ended up spilling the beans this morning on its next-generation Exynos 4 Quad processor.

The new application processor runs at 1.4 gigahertz, is built on ARM’s Cortex A9 CPU, and was developed with the new “High-k Metal Gate” 32 nanometer process. All of that means the Exynos 4 Quad is incredibly energy efficient, while also being a powerful little devil. According to Samsung, the new chip will double the processing power while being 20 percent more energy efficient than the current Exynos 4 Dual.

Samsung still hasn’t confirmed the Galaxy S III by name, but the company has made clear that the chip will be in its “next Galaxy” smartphone.

Having four cores allows the chip to better handle multitasking — one core could deal with streaming video, for example, while another could handle background tasks. And of course, all four cores can work together for heavier computing loads. In an effort to be power efficient, Samsung says the chip supports per-core voltage and frequency scaling, and it can also turn off cores completely.

Samsung wisely made the new processor pin-to-pin compatible with the Exynos 4 Dual, which means handset makers will easily be able to upgrade their lines. The Exynos 4 Quad is already in production and is currently being sampled by other manufacturers.